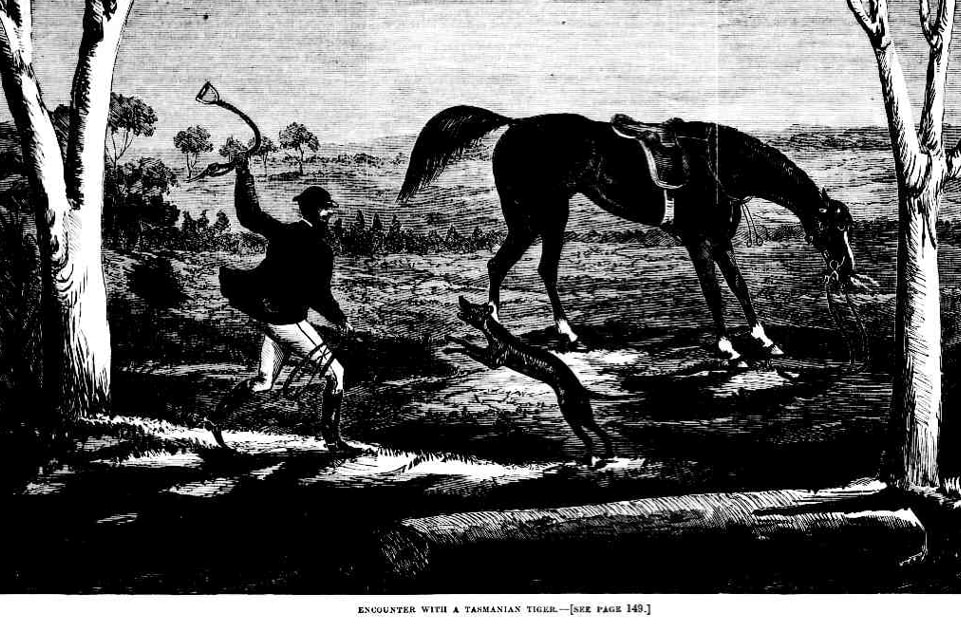 ENCOUNTER WITH A TASMANIAN TIGER

OF the Tasmanian ferœ, perhaps the most savage is the native tiger (Thylacinus cyanocephalus).

This animal, a faithful representation of which is given by our artist, is now very seldom met with in the settled districts of the island, the ravages which it commits amongst the flocks whenever it falls in such company having made it an object of the special animosity of the colonists. It bears no resemblance in form to the great feline whose name it borrows; but its skin is marked with transverse stripes, and to this peculiarity it, of, course, owes its appellation.

The gentleman whose adventure is pictured in our engraving was looking for horses on the Blackboy Plains, near Fingal, when, on passing a flock of sheep, at about 300 yards distance, he observed an animal which he took to be a dog of kangaroo breed trotting through the flock. He passed on, the nthought striking his mind that the supposed dog had a rather singular appearance, when, turning suddenly round, the identity of the animal with the native tiger was betrayed to him by the marks on its skin.

A hunt of a most exciting kind was immediately improvised, the tiger leading its pursuer through lagoons and timber, and maintaining tremendous speed. After a chase of an hour and a quarter the tiger began to show signs of weariness, and his enemy being enabled to come within flagellating distance, soon brought it to bay by means of a liberal application of the stock-whip.

Although by nature a coward, this savage fights with an uncommon ferocity when driven to close quarters. In this instance the tiger carried on the combat with amazing fierceness ; but human strength and human contrivance were against the brute, which, after a quarter of an hour’s desperate resistance, fell dead under the blows of its antagonist, administered as depicted in our engraving. 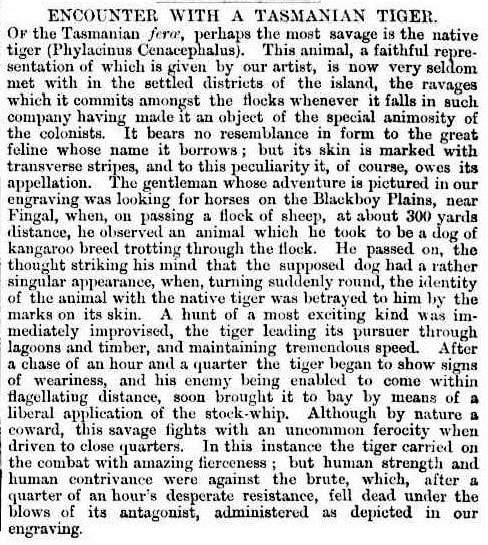