Stew Walker has sleep apnea and snores a lot. The Book of Snorin’ – Sleep Apnea The Musical, which will be among The Fringe at the Edge of the World’s many performances, follows Stew on his quest to treat the sleep disorder.

He was diagnosed with it over 20 years ago. “But I was in denial for a while,” Stew says.

“I tried a few things like nasal sprays and losing weight, but the nasal spray didn’t do anything and my weight loss plan wasn’t successful. I kept going to the gym, but maybe I should’ve actually gone inside and done some exercise!”

Stew says he came up with the idea for The Book of Snorin’ when he started using a CPAP machine to treat his sleep apnea in the lead-up to the 2019 Melbourne International Comedy Festival.

“I thought ‘Why not do a show about sleep apnea?’” he explains. “My wife and kids gave me plenty of reasons why it was a bad idea, which only encouraged me to give it a go and make it work!”

He wrote most of the musical over a 6-month period. He then refined the material after trying bits of it out at different comedy gigs. The musical sold out at the 2019 Melbourne International Comedy Festival. 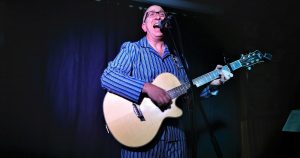 “I was elated about this,” Stew says. “There’s a lot of work that goes into putting a show together, so it was really satisfying to see it all come together so well.”

But will Tasmanians love world’s first comedy show about sleep apnea or snore through the performances? “Yes I’m sure they will like it,” said Stew. “It’s a relatable true story told through funny songs and jokes. What’s not to love?!”

Performances of the 50-minute show will be on Thursday 9 and Sunday 12 January at The Brisbane Hotel.