Dr Ian Broinowski’s new book is an extremely important contribution to modern Tasmania’s awareness of its colonial past. Through the eyes of a war correspondent during the early days of Tasmanian settlement, the frontier clashes are told using actual clippings from the newspapers of the day. He also attempts to find the Pakana voice as their homelands are seized, degraded and changed forever.

The other key contributor to the work is Jim Everett-puralia meenamatta. The pair came together in extraordinary circumstances,  “I was at a Writer’s Festival event where Jim was speaking about the dispossession of his ancestor’s lands in the Fingal Valley. It was extremely moving. And at the time I’d recently been researching the history of my family who settled around Avoca. So I went up to him afterwards and said, ‘It was my family who did that,’ “explained Ian.

Thus was born the idea of a collaboration and the idea to tell the story of the frontier wars. W.C., the typical war correspondent, writes from Hobart from his arrival in 1814 until his death in 1856. His passing in the end is as much of weariness as anything, as he writes to his friend and (real life) Tasmanian newspaper dynamo Andrew Bent, “I have no more tears to shed. My eyes are dry and sore from sensing the many words I lay before you…I have seen too much for one lifetime.”

Indeed the novel is difficult read. There is the emotional side as one journeys sometimes almost unnoticed to startling conclusions. Almost casually The Pakana Voice notes that in 1814 it was reported that Aborigines were ‘fed as paupers’ by the Reverend R Knopwood. That starvation could have loomed so quickly on indigenous people is not a story that our mainstream culture has recognised.

There’s also the somewhat technical difficulty of accustoming oneself to the writing style of the time. Salient points are often wrapped up in a style that two centuries in smacks of wordiness and frankly reeks of condescension. For example,

‘The two natives whom Mr Roberts brought up last week from the channel, displayed great quickness of understanding and force of mind. That their happiness is circumscribed must be evident from the limited resources which their habits of life afford, nevertheless, they have enjoyments in their savage state, many of which the most civilised whites would envy.’

That said, the effort is well worth it. The reader is amply rewarded for patience and indeed fortitude with the a rich insight into the events and mentalities of the time as expressed through primary sources. And through the narrative device of WC’s romance with indigenous woman Lowana, a serious attempt is made to also engage the indigenous perspective of the period. “I’m not a white person trying to write from an indigenous perspective,” said the author of The Pakana Voice. “I’m depicting a journalist who is trying to give them, and their struggle, a voice.”

Additionally a fine job has been done of recovering indigenous language terms of the time with their usages. One certainly gets the impression that Dr Broinowski has a good ear for language overall, and how it matters. “I looked at all the names used for Aborigines over that period and ‘people’ was not one of them,” he confessed. “Indeed there were commentators whose tone was very much like that of the ‘shock jocks’ of today.”

WC may be a character of convenience but Dr Broinowski is convinced that at least these words ring (sadly) true: ‘I fear the old adage that we learn from history is indeed a misnomer.’ Any of us who don’t wish to fall into that trap simply must read this book.

Half the proceeds from sales of the The Pakana Voice will go to writers in the Pakana community of Lutruwita. The book is on sale at Hobart Bookshop, Fullers (Hobart) and Petrarch’s (Launceston). For those ordering online it can also be purchased via Lulu. 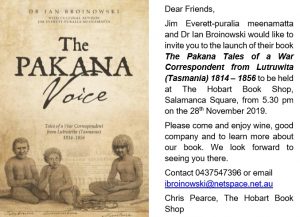