”Life is a Bitch” will headline the Latin American Film Festival LAFF 2019. The latest cinema offering from Brazilian director Julia Rezende is a riveting and darkly comic tale of ordinary people pushed to extremes. In Rio de Janeiro, times are tough and life is very expensive, specially when you are planning a wedding.  Unable to do anything to make sense of their lives, four friends come up with and absurd scheme to turn things around: kidnap a millionaire. Will these amateurs abductors actually pull their plans off?

Opening night will start at 5:30pm, with drinks, finger food, music and traditional dance “Forro”, followed by a 7pm screening. Supported by the Latin American embassies in Canberra, the festival will be held in Hobart from 29 November to  8 December at the Stanley Burbury Theatre at the University of Tasmania in Hobart.

Peter Slipper, Honarary Consul of Brazil in Tasmania,  will be the guest speaker of the opening night of LAFF on Friday 29 November at 6:30pm.

The film festival is open to the public and the entire program is FREE of charge. All films will be subtitled in English.

The festival appreciates the generosity of Global Engagement of UTAS and Student Welcome and Engagement Events of UTAS, who are also sponsoring this event in Hobart by providing a venue. LAFF also thanks the Brazilian Embassy in Canberra for providing the films and organisational support.

This Australia-wide cinema event is coordinated in Tasmania by Ms Jenny Forward  0400 701 902 and Ms Sonia Parra. 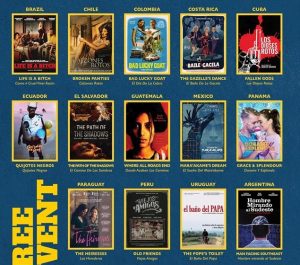