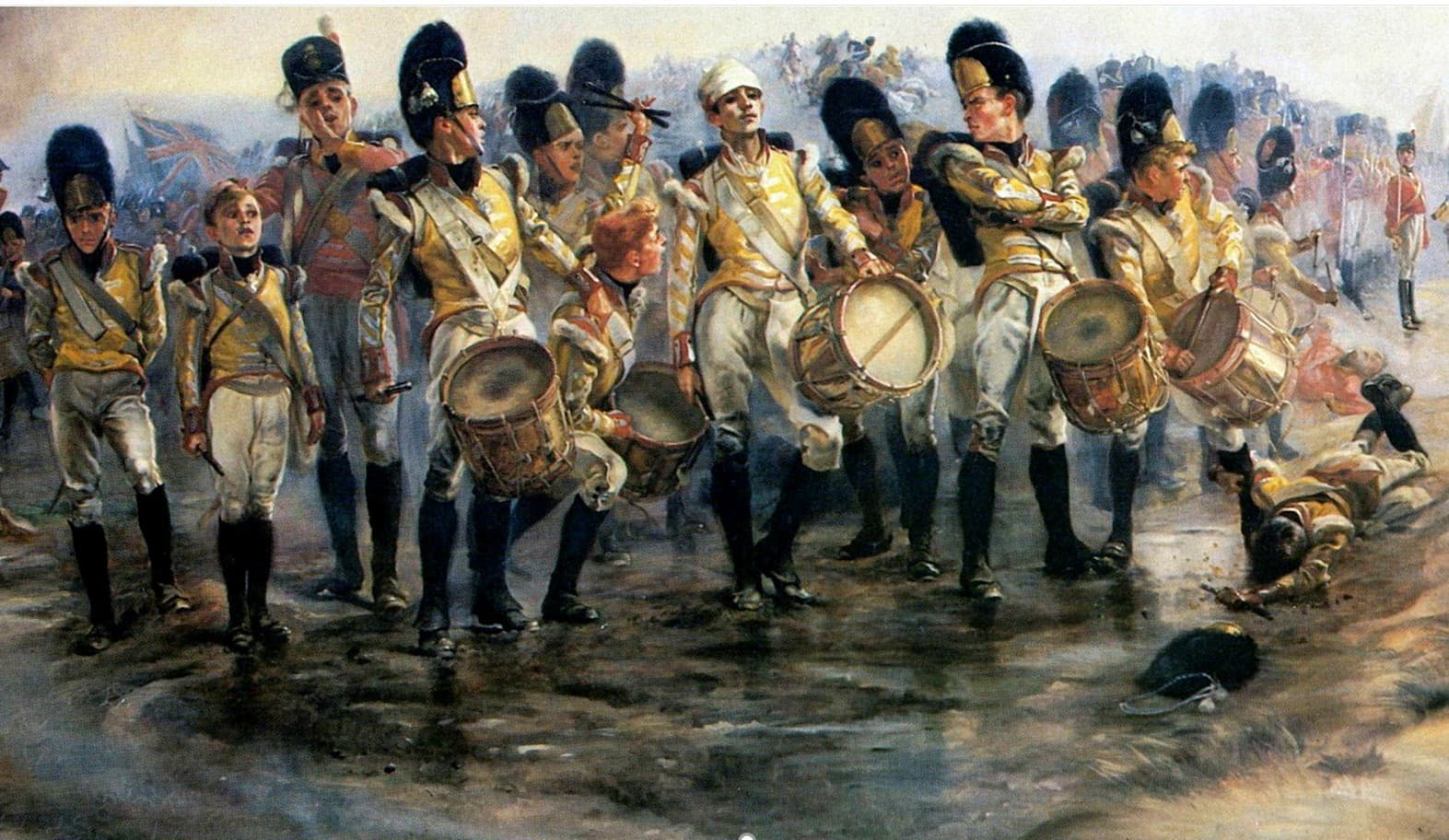 image: ‘Steady the Drums and Fifes’ – The drummer boys of the 57th Regiment (The Diehards)

Lt-Colonel Thomas Shadforth commanded the 57th Regiment (The Diehards) in Australia from 1825, having survived the battle of Albuhera on 16 May 1811 where the legend of the Diehards was born. Battalion casualties were 422 out of 570 men in the ranks and 20 out of 30 officers. The Allied General Beresford wrote in his dispatch, “our dead, particularly the 57th Regiment, were lying as they fought in the ranks, every wound in front.” Colonel Shadforth was promoted in the field.

Small Regimental detachments under junior officers were sent to all parts of Australia to claim land and administer frontier posts on behalf of the Colonial government. Diehard Major Edmund Lockyer led an expedition to the west to claim Western Australia for Britain. He sailed from Sydney on 25 December 1826 with twenty soldiers of the 57th regiment and twenty-three convicts. He arrived on 21 January, 1827. The Union Jack was raised and a Feu de Joie was fired, thereby annexing the territory in the name of the King. On 24th August 1824 a naval expedition, commanded by Captain Bremer RN, was tasked with establishing a permanent military outpost in northern Australia, a region then lying outside the control of the Australian colonies or the British Empire. A detachment of the 57th regiment under Diehard Major John Campbell was sent from Sydney in 1826 to this new settlement at Fort Dundas on Melville Island. 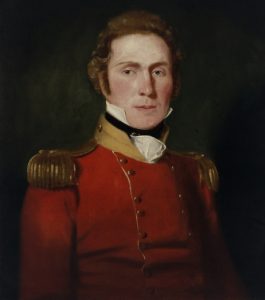 Diehard Captain Patrick Logan (see his portrait above) was posted to Moreton Bay where Logan and his lash kept a thousand convicts under strict control while building a new convict settlement. When I was commissioned into the Diehards in 1962 Logan’s portrait hung in the Regimental Headquarters at Mill Hill.

Two of Shadforth’s sons accompanied the Colonel, as subalterns, to Australia. Diehard Lt. John Tudor Shadforth held Westbury on the Western Line from 1826. He was responsible for overseeing the construction of the principal access roads for the Van Dieman’s Land Company. By 1826, river crossings had been achieved at Hadspen, Carrick, Westbury and Deloraine. The next big obstacle was to cross the Mersey at the end of the Valley. Edward Curr, Chairman of the Company, reported to Lt. Governor Arthur on July 31st 1826 that “we remained in the neighbourhood of the second Western River which we named the Mersey … and formed a stock reserve north of Quamby’s Bluff.” Curr, in addition to the Van Diemen’s Land Company, imported stock. He had purchased 2,300 sheep in Tasmania and so overlanding was the only way. This was achieved by Fossey, the Company’s Land Surveyor, as a cart track by April 1827, and with the help of Shadforth, his convicts and their guards.

Crossing the Mersey at Gad’s Hill, the track led to the Company’s land grants at Middlesex Plains 10,000 acres, Surrey Hills 150,000 acres and Hampshire Hills 10,000 acres, and then on to the coast at Emu River, thence along the coast to Woolnorth.

The driving of this new track through Pallitore country resulted in conﬂict, so much so that Lyndall Ryan, in the ‘Aboriginal Tasmanians’, concludes that: when conﬂict broke out in June 1827 it was more intense than in other parts of the settled districts, and as a result between June 1827 and September 1830 the Aboriginals fell in number from 200 to 60. Robinson’s expedition, between Emu Bay and Westbury from the 6th of August to the 24th September 1830, allowed him a visit to the ochre mines on the Gog with his Aboriginal guides, as described in his diary where he noted that hardly any Aboriginal people remained on their original camping sites.

Lt. Shadforth named the principal streets Albuera (after La Albuera in Spain) and Shadforth after himself and laid out the villages of Westbury and Deloraine. His shackled convicts became the road makers and stone crushers, and they were chained up for the night to trees in the field to prevent their escape.

Return of the convicts?

Now, after nearly 200 years, convicts could be returning to Westbury. A proposal has been floated to construct a major new prison on the outskirts of the town. It hasn’t taken long to generate quite a stir, and not in the way the Government would have hoped for.

In planning terms, a new custodial facility at the Valley Central Industrial Precinct, Westbury is neither compatible nor allowed. The proposed custodial facility – clean and green PR words for a prison – will require a land use change by resort to the extraordinary mechanism of a Particular Purpose Zone; a planner’s party trick whereby the council planner can write the rules, perhaps under ministerial direction as there are no standards for a custodial facility in the Tasmanian Planning Scheme. This legislation, if the councillors by a majority agree to its enactment, will be used to place the Westbury prison on a portion of the industrial area which would otherwise be prohibited. This allows the Meander Valley Council to recoup a large sum of money loaned to the landowner to develop his agricultural land. The zoning and loan were agreed by a council under Mayor Shelton before his entry into Liberal Party politics.

This is an entirely different proposition to placing a prison on a block of vacant land at Longreach, adjoining Bell Bay, once zoned as the site for the defunct Pulp Mill. There is no industry on the Gunns’ site, which is now vacant land, and therefore there is no land use conflict. Further, a prison provides the potential for considerable local employment when the smelters close.

In the North two competing industrial sites are actively looking for occupants: Bell Bay/Longreach and Westbury. Each has good road access and the required services. A history of the Longreach Gunns’ Pulp Mill site, and the corruption over due process by duplicitous politicians, has been well recorded in the archives of Tasmanian Times. Bell Bay/George Town meanwhile has two smelters, both under competitive fire from China that may lead to closure and a potential unemployment problem. Closure of either or both smelters will have to be sorted out by a Liberal government with its blatantly thin pool of talent.

A history of the Westbury prison site will be included in the next part of the series. The majority of the proposed land, overlaid by the prison footprint, is still zoned agricultural and outside the current industrial area. The land available in the now re-zoned industrial site is insufficient to accommodate a prison. As a result, more agricultural land will have to be acquired from the landowner making his ten-year wait worthwhile. Westbury could be lumbered with a prison all to cancel a council debt, incurred under the auspices of then Mayor Shelton. His name, which appears on the loan documents, could then be conveniently expunged.

The cost and ownership of a new prison is now generally outsourced by political parties strapped for cash, it being electorally expedient not to raise taxes if you wish to be re-elected. The developer of the prison and his bank will recoup their costs and make a substantial long-term return on their funds by using a government long term lease as security over the transaction. They bear little risk. The largest Australian prison contract ever awarded was to the consortium of Northern Pathways which includes Macquarie Bank, the NSW government and the security conglomerate Serco, the world’s leading provider of border control and immigration services. Serco processes asylum applications and the management of detention centres, and will operate this new jail at Grafton in a contract worth $2.6 bn to be paid over 20 years. Macquarie Bank has a history with the Tasmanian Government over the controversial acquisition of Hobart Airport, and Serco with the Federal Government in the running of onshore detention and immigration camps. It has not been disclosed if Macquarie Bank and Serco are involved over the proposed new Westbury prison.

On the 8th November I sent two emails (quoted in full below) to Susie Bower and Will Hodgman. Both parties have acknowledged receipt with Bower flicking hers to Leigh Darcy. https://bbamz.com.au/meet-the-team. Bower is an unsuccessful candidate for Mayor at the last Meander Valley Council (MVC) election of 2018. She is also the current Project Officer for the Bell Bay Advanced Manufacturing Zone.

If TEMCO decides to close their plant at Bell Bay a solution to the loss of jobs lies with Rio Tinto who hold a caveat over the Gunns Longreach site.

I have approached this on the basis that if Rio decide to close the Aluminium Smelter, which I suggest is unlikely but possible, they on this evidence hold the key to the TEMCO workers re-employment.

If TEMCO decide to close their manganese smelter which is highly probable then they could liase with Rio Tinto to use their veto to ensure the workers from TEMCO could get a job in building and later manning the prison.

This would show them to be a good corporate citizen helping another company and its workers in need.

The prison is slated for Westbury, the Longreach Bell Bay site is a better bet.

May I ask you for a comment for Tasmanian Times?

I am preparing an article on the Westbury prison for Tasmanian Times. This internet newspaper will restart with my article to be published in three parts in successive weeks based around your answers or non-answers to the following questions:

I look forward with interest to your reply.

In retrospect and after further research, I would have asked the Premier to answer the following extra questions:

What is the reasoning behind the Tasmanian Government’s attempt to create a Northern Regional Prison?

Why was public consultation over the Westbury prison site only started after the Government had commenced proceedings?

In terms of good governance why was the community not asked where in the north a prison should be located before the State Government canvassed expressions of interest?

Why would a proposal for a new prison not go through a public strategic planning process?

Why have the Tasmanian Planning System objectives been ignored?

An investigation into how the Westbury community became slated as a potential prison town will be continued over consecutive weeks in three additional parts. Any important new information about the Westbury prison development and related issues should be forwarded to editor@tasmaniantimescom.

This article will discuss how this prison development was dropped like a bomb onto a small farming community, and the heritage village of Westbury, without prior consultation by the government.

This article will suggest that a far more practical and suitable location can be found at Longreach. This is the  now defunct Gunns pulp mill site.

This article will discuss the concept of rehabilitation and options other than incarceration. If the serious criminals remained at Risdon, and those in need of treatment are assisted away from a prison setting, there would, I suggest, be no need to build another prison.

John Hawkins has lived in Tasmania for 17 years. He has recreated with his wife Robyn a 19th century landscape over the Bentley Estate at Chudleigh. He is interested in the Tasmanian way of doing business. John was commissioned into the Diehards from Sandhurst in 1962.