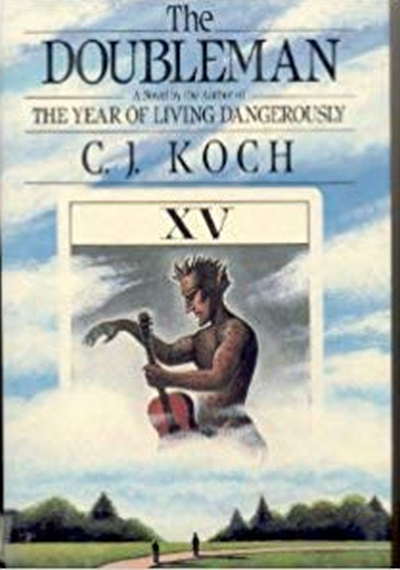 Author Christopher Koch is unknown to most people.

This is surprising, because he had a huge reputation in the literary world, and is considered Australia’s best writer of fiction ever (yes, even better than Richard Flanagan and Tim Winton).

All his books have sold well, especially the one that made him successful: The Year of Living Dangerously (published in 1979), which was adapted into a film starring Mel Gibson in 1982. Koch always wrote with great purity. His writing is never flamboyant, and he never showed off. Two of his novels won Australia’s top literary award, the Miles Franklin Literary Award.

One of these two novels, The Doubleman, was published in 1985. It’s mainly set in Tasmania and Sydney. Richard Miller works at the Australian Broadcasting Service and produces a successful electric folk group in Sydney.

The group consists of Richard’s cousin Brian Brady and friend Darcy Burr, and eventually Richard’s wife, Katrin. During their youth in Tasmania, Richard, Brian, and Darcy were influenced by a guitar teacher named Clive Broderick, who’s also an occultist. Clive frequently spoke to them about power, and a realm that exists beyond reality. Broderick’s influence and presence remains with the three of them, long after his death.

Like Koch’s other novels, The Doubleman is expertly written. Each sentence and paragraph flows irresistibly into the next. All the characters are believable, and the descriptions of places and landscapes were majestic. I never questioned any aspect of the novel: everything made perfect sense. It’s no wonder it won the Miles Franklin.

I give it five out of five.