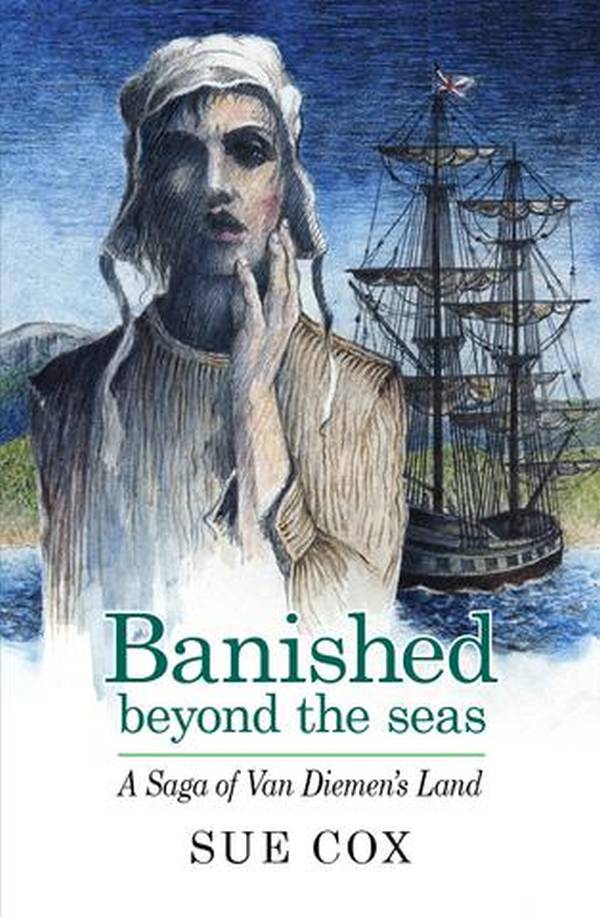 Banished Beyond the Seas: A Saga of Van Diemen’s Land, a 2017 novel by Sue Cox, tells the story of Jeannie Haddo, who owns and runs an inn in Scotland with her husband, Duncan.

They live a content life with their six children; but this life is tipped upside down when Jeannie is falsely accused of assault. She’s subsequently put to trial and found guilty. Her sentence: to be transported beyond the seas to Van Diemen’s Land for seven years.

Jeannie, naturally, constantly worries about being away from her family for that long. She endures the four-month voyage to Van Diemen’s Land, during which she becomes good friends with other female convicts.

Once she arrives in Van Diemen’s Land, Jeannie is assigned as a maid to a master and mistress. She has to work long hours, but she works hard, determined to serve her sentence and reunite with her family.

The novel, which consists of generally short chapters, is structured like all convict stories. The first part consists of the convict’s trial and sentencing; the second part describes their voyage to Van Diemen’s Land; the third part depicts the convict’s life in the colony; and the fourth part tells of the life they decide to live when they receive their freedom.

I think Cox could have gone into more detail about Jeannie’s feelings. Sometimes she told instead of showed. I believe that detailed descriptions of characters were also needed: some of them were only introduced by name only. Descriptions of places and locations needed to be more detailed, as well. For me, the novel’s lack of detail meant that I couldn’t really become emotionally invested in the characters. But the dialogue is sometimes wooden but generally accurate for the period in which the novel is set.

I’d recommend this novel to people who have only just become interested in Australia’s convict era. But for those history buffs who are already well-versed in it, I’d suggest giving it a miss (you’ve probably read it all before elsewhere).

Callum Jones has a Bachelor of Arts with Honours in Journalism, Media and Communications, and currently volunteers for Volunteering Tasmania and St Giles Society. He loves writing fiction and non-fiction. In his spare time, he likes to read, watch movies and TV shows, and go on walks. You can follow him on Facebook (@callum.j.jones.writer) and Twitter (@Callum_Jones_10).