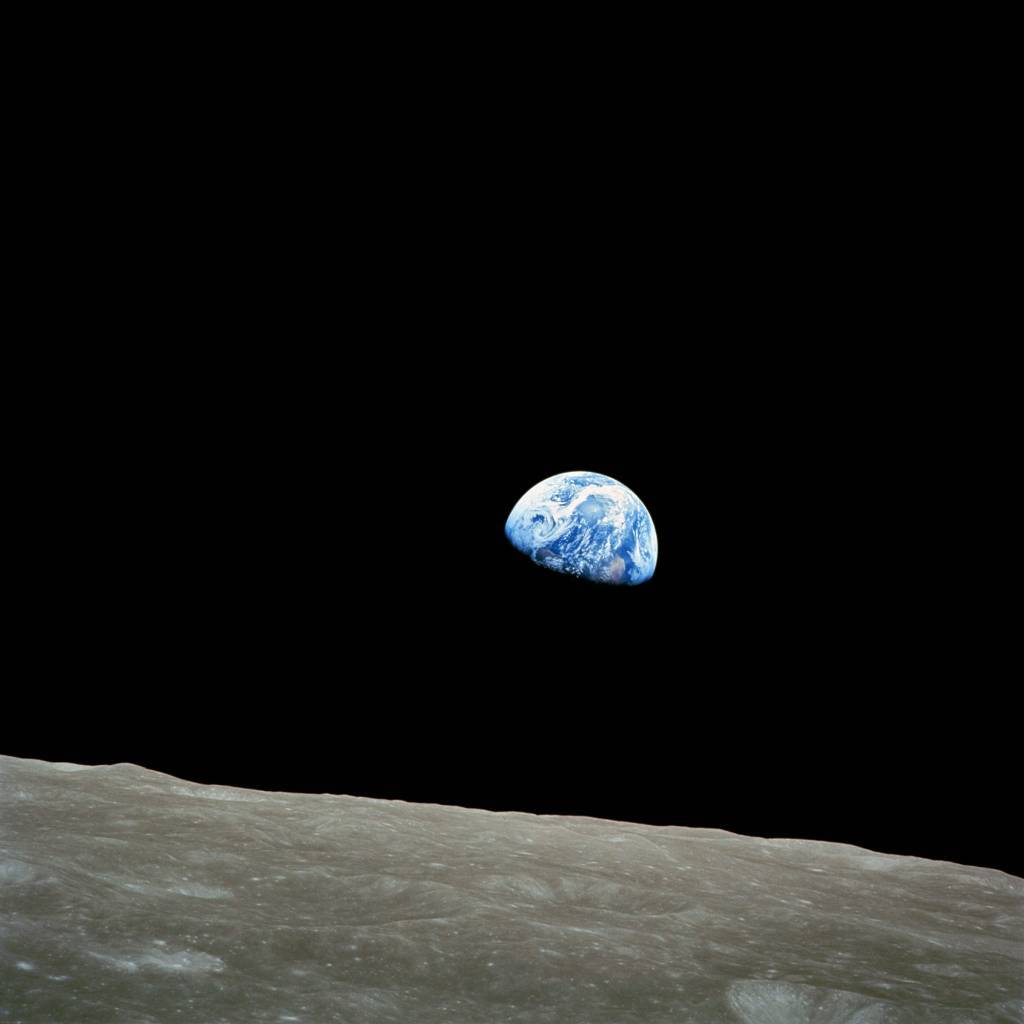 On the 24th of December 1968 the crew of the Apollo mission orbiting the Moon cried out in surprise.

They had seen something beyond anything they could comprehend. They saw the Earth. Their training kicked in; record this! All of the crew started yelling for the cameras and William Anders grabbed the cameras from their rack and threw them one to each astronaut.

The camera he picked up was the only one with colour film in it and the image he made changed the world. Anders later recalled that when he made the image he mused, ‘We came all this way to explore the Moon, and the most important thing is that we discovered the Earth.’ Pilot Jim Lovell radioed a description that was heard around the world, describing what they saw as; ‘a grand oasis in the big vastness of space’.

Called Earthrise, the image was the first time people saw the world that is their home. On Christmas Day the front page of the New York Times simply carried the words of the poet Archibald MacLeish:

To see the earth as it truly is, small blue and beautiful in that eternal silence where it floats, is to see ourselves as riders on the earth together, brothers on that bright loveliness in the eternal cold—brothers who know now they are truly brothers.

Earthrise is a transcendent image, everyone who has ever lived is in that image and it showed people how the world we live on is at risk of destruction by our own hands. This was the time of the Cold War, but beyond the chance of nuclear destruction there was the chance of environmental devastation, something that we are now seeing come to pass.

The image inspired the modern environmental movement and demonstrated to people that our actions on Earth don’t go away. The image fitted in with some important ideas that had arrived. Rachel Carson’s 1962 book Silent Spring had revealed with shocking precision the effect of chemical pollution on life on Earth. And just before Earthrise, the British economist Barbara Ward-Jackson had published a book Spaceship Earth where she argued for sustainable development and that the planet was in essence a closed system, a spaceship that we could pollute and degrade if no care is taken. And there it was: Earthrise made Spaceship Earth a real thing.

British economist E. F. Schumacher followed this with the book Small is Beautiful a sharp critique on the destruction and dehumanisation wrought by massive corporations and the insanity of the emerging neoliberal economic ideas of ‘bigger is better and biggest is best’. His basic thesis was described as, ‘a study of economics as if people mattered’ and is still studied and relevant today.

Soon after the British chemist James Lovelock published a paper proposing a hypothesis that the Earth is functioning as a single system, that life on Earth interacts with inorganic matter to regulate and promote life itself. He called the system  Gaia. This idea, which he developed further with Lynn Margulis, can be clearly identified as the most revolutionary advance in the study of life on Earth since Darwin’s On the Origin of Species.

The Gaia Hypothesis has formed an entire new field of research, Global Environmental Studies, that is studied around the world. It has brought to light the explanation of why oceanic plankton carry a chemical antifreeze in their cells, or how spiders can fly to Antarctica.

Earthrise transformed our view about our place in the environment of this planet and our effects, and inspired a movement that continues today in the face of adversity.