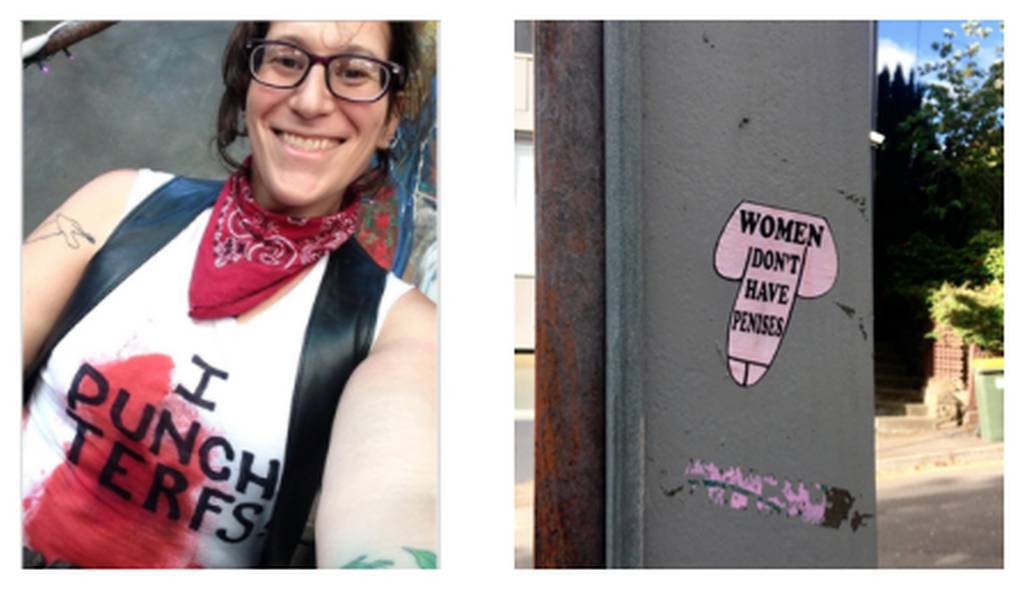 Delaney said the stickers expressed a view ‘actively promoted by only extremely conservative Christian groups and a very small percentage of women – TERFS (trans exclusionary radical feminists) – who claim to be feminists’.

Gay rights activist, Rodney Croome, posted the article and accompanying picture of the offending sticker on his Facebook page – HERE – and I made the mistake of asking which was more ‘hateful’ the pink penis saying something most people would accept as an uncontroversial fact, or a blood stained transactivist t-shirt saying ‘I punch TERFS’.

I also referred readers of the post to a website – HERE – that contains hundreds of examples of violent, abusive and obscene online threats directed at those who don’t unquestioningly accept trans ideology, especially those who say transwomen are not women.

Things went from bad to worse – I was accused of not being a ‘real feminist’ and ‘hating all trans people’, and there was a bizarre side discussion about plagiarism and copyright infringement.

Finally, the following picture was posted … 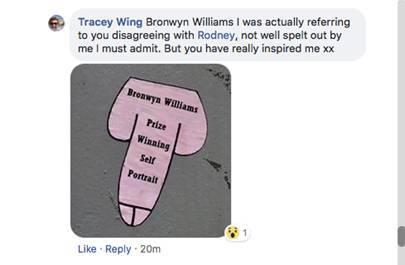 This is both insulting and defamatory, but somehow trans rights activists feel entitled to demean those who express a different view.

They don’t address those views – they repeat the ‘transwomen are women’ mantra and when that doesn’t work, they resort to personal insults and extraneous arguments about totally unrelated topics.

We don’t know exactly what amendments to Tasmanian birth registration and anti-discrimination laws will be put forward by Labor and the Greens this week, but I think we all have good reason to be worried about the impact on our freedom of speech.

No-one can say ‘Women don’t have penises’ without the trans lobby accusing them of being a transphobic bigot.

But they have right on their side when they plainly refer to a woman they don’t know as a ‘dick’.

Imagine what they’ll do when the law protects their preferred names and pronouns under the banner of protections against ‘hate speech?