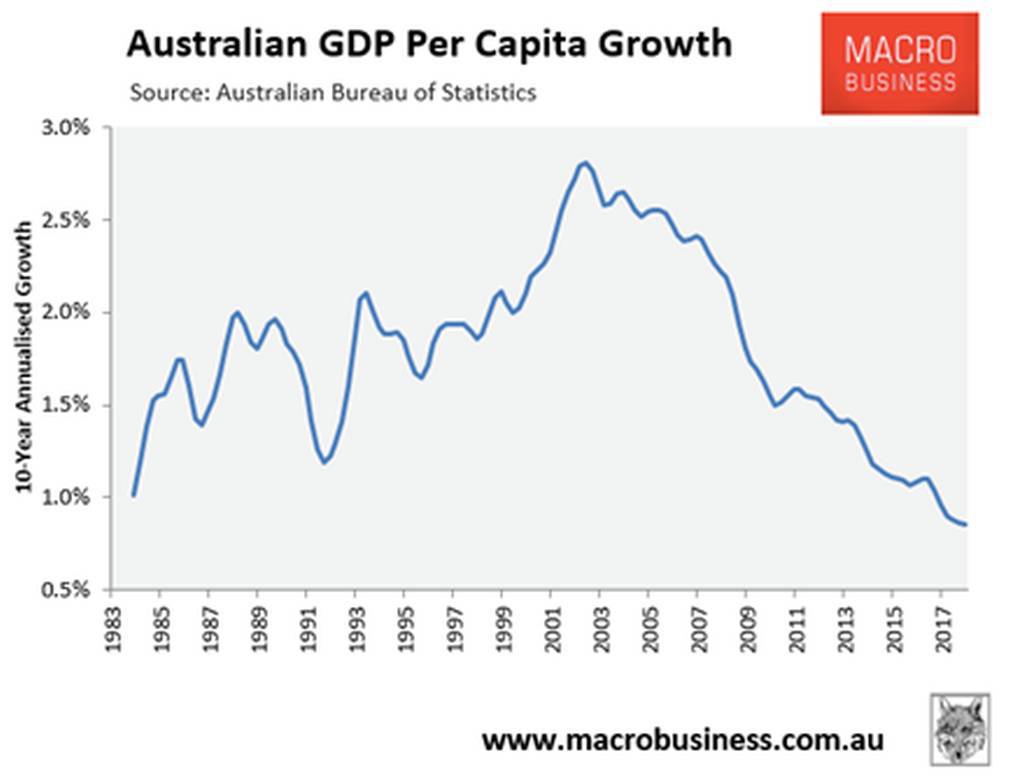 You cannot fully appreciate the degeneracy of western politics without understanding the consequence that followed from the Left abandoning their traditional labour values. No other ideological shift has been more important in allowing the wet-dream of the far-Right to become a reality.

Angela Nagle has just published a superb analysis of how this came about in the USA ( American Affairs Journal ) and why the globalist-Left, as a ‘useful idiot’, has been the prime enabler of the excesses of the far-Right.

Quite recently, the far-Left has done much to politically weaponise simplistic ‘race-based’ and ‘identity’ narratives coupled with an ‘open-boarders’ ideology that has driven an already alienated working class further to the Right – to the so-called alternative Right.

Playing with the same forces of despair that propelled Donald Trump to power and brought about Brexit, the self-absorbed Left has yet to wake up to how they may well enable a similar outcome in Australia.

At the very least, they may leave a legacy of divisions and lingering fault lines in our society based on group identity, tribalism, class and political opportunism.

By chiding and patronising an already disenfranchised block of voters, those who have not done well from the neoliberal project of globalisation, austerity, deregulation and mass immigration, the loopy-Left has trivialised a hell of a lot of people with genuine grievances.

Because the rise of the ‘useful idiots’ of the Left has been a blessing for those hell bent upon the economic exploitation of vulnerable people and breaking the back of unions.

The far-Left supports extreme immigration in spite of the problems it causes the poor and the toxic political fallout that follows. From Nagle’s article, she observes that:

“The transformation of open borders into a “Left” position is a very new phenomenon and runs counter to the history of the organized Left in fundamental ways. Open borders have long been a rallying cry of the business and free market Right … “

This transition has come about because the labour movement and Left has cashed in much of its muscle for what it sees as new vote-winning virtue and a deal with the big end of town that has the bosses rubbing their hands together with glee. Nagle notes:

“There is no getting around the fact that the power of unions relies by definition on their ability to restrict and withdraw the supply of labour, which becomes impossible if an entire workforce can be easily and cheaply replaced. Open borders and mass immigration are a victory for the bosses. And the bosses almost universally support it …”

Oddly, the best friend of the bosses in the crushing of wages and union power has been the far-Left and their harping useful idiots who strut the political stage as virtuous peacocks to provide the ideological smoke. As Nagle says:

“Today’s well-intentioned activists have become the useful idiots of big business. With their adoption of “open borders” advocacy—and a fierce moral absolutism that regards any limit to migration as an unspeakable evil—any criticism of the exploitative system of mass migration is effectively dismissed as blasphemy.”

And this is exactly where The Greens and elements of the ALP’s Left have taken the discourse in Australia.

Cashing in their environmental and labour chips for lily-white virtue much of the Left now yaps at the heels of anyone who wants to have a proper discussion about the consequences of unplanned mass immigration. The discussion about what a sustainable human population might be for Australia is drowned out and diverted by the race-obsessed Left. Heaven forbid that we might have a conversation about abandoning workers or throwing Australian youth and the labour movement under a bus.

Today, the far-Left are the ideological Sirens that lure often exploited immigrants and Australian workers to the rocks as they snarl rabidly at an invisible army of ‘racists’ that they imagine are laying siege to their inner-city cafes and wine bars. In doing so they have provided moral smokescreen for the far-Right’s faux ‘humanitarian’ motivation for mass immigration, that by a happy coincidence keeps wages anaesthetised and creates a timid underclass bribed by the promise of a visa.

A lack of infrastructure and crush-loading of our cities seems to the far-Left as a small price for other to pay for their virtue.

And it really does not seem to bother those of the Left in the least to ignore the concerns of people that are the victims of this, many of whom they like to portray as contemptable racists; or “deplorables” as Mrs Clinton might say.

Do racists exist in Australia? Unquestionably, just as they do in every other nation on earth. But the overwhelming majority of people concerned by unsustainable population growth are not in the least bit interested in skin colour or race.

Importantly, de-humanising your ideological enemy is the first law of propaganda and the far-Left has done a fine hatchet job on those ordinary and often inarticulate and unsophisticated Australians who are the biggest victims of globalisation, but dare to question the caped-crusaders of PC politics.

A recent article in the online site Macrobusiness ties this together and provides an impressive catalogue of rampant human exploitation that has resulted as case studies. It is well worth reading this long and shameful list alongside Nagle’s analysis. Together it highlights the irrationality and confused narrative of the left’s media shrills:

“…‘useful idiots’ across the leftist media constantly argue contradictory positions in defence of both wages and immigration without blinking an eye. Low wages are not a bug in this system, they are feature of it. The immigration-led growth model guarantees wage theft by relying implicitly upon a permanent supply shock that guarantees labour oversupply and by importing more exploitative attitudes to class within ethnic groups.”

And it’s pretty hard to dismiss the cold hard data that has come from this marriage of convenience, that has allowed a neoliberal population Ponzi scheme to blossom beyond the wildest dreams of the debt-pushing finance industry, corrupt bankers and builders of flammable dog-boxes.

Because here is the 18 year declining GDP per capita, or your share of GDP, ever since the federal government stepped on the mass immigration accelerator in their drive to Big Australia: 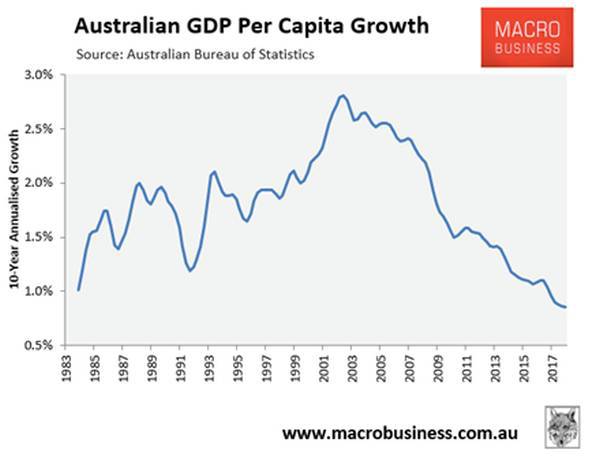 And here is your decade of stagnating wages: 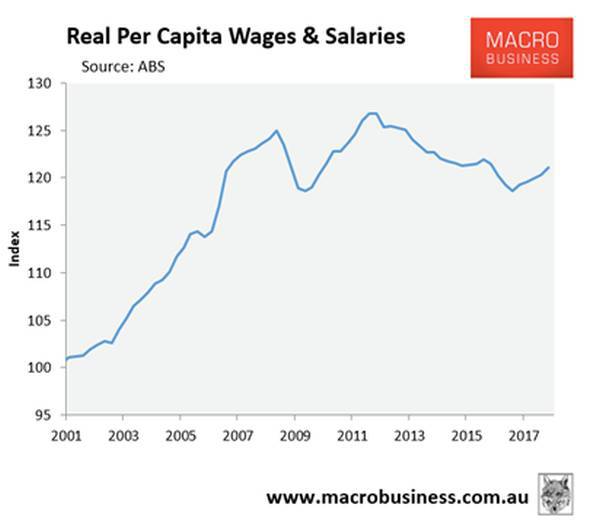 Mass immigration may be great for billionaires who own consumer goods and construction corporations, but it’s not so good for those selling their labour or skills. Because the benefits of using mass immigration to stimulate the economy are not shared equally and the use of gross (rather than per capita) GDP by the media mass immigration cheer squad has hidden this dirty little secret. As for the environmental and social costs, no one has even bothered to calculate it.

The Macrobusiness article ends with a salient observation about the Left’s social vandalism in Australia:

Clearly this is happening in Australia in the inner-city electorates where Volvo drivers seeking virtue and absolution for their gentrified existence and banquet of conspicuous consumption play ‘spot the racist’. But it’s just a little bit too easy to smear everyone else as a bigot as you have your coffee brought to you by a low paid foreign backpacker or immigrant forced to work for a pittance.

If anything is truly deplorable it is the extent of such breathtaking hypocrisy.

Nagle offers a warning based on what has brewed up in the USA and we would be well advised to heed it. It is scarcely believable that the labour movement in Australia and The Greens are champions of such a divisive ideology that is almost a complete about-face from their grass roots beginnings that sought to protect workers and the urban and rural environment from population pressure, over-development and loss of amenity.

It is abundantly clear that The Greens are no longer the party of Dr Bob Brown. Those who vote for them out of misty-eyed wistfulness for a time when environmental sustainability was their green light on the hill better be content with being a compliant moth circling an ever dimmer bulb.

The far-left now owns The Greens as a branch office; environment and sustainability is only a shop front for a shrill ideology that says that we can never have too many people in Australia and if you don’t agree with such lunacy you are a racists who can go to hell, or to the alt-Right.

And if Nagle is correct this matters a lot as it will have big consequences.

“By providing inadvertent cover for the ruling elite’s business interests, the Left risks a significant existential crisis, as more and more ordinary people defect to far-Right parties. At this moment of crisis, the stakes are too high to keep getting it wrong.”

And the Left has got this very badly wrong in Australia too. Their useful idiots are driving those with valid concerns about the consequences of the neoliberal scheme of mass immigration into the arms of the growing alternative right. In response they have blocked their path to the Left and turned up the volume of Kumbaya in their Volvo as they sit in a traffic jam they have helped to create with a brain-dead ideology that is in reality all about them.

Dr Anon Gumanam is a well published academic who is sick and tired of the far-Left’s tactic of shaming, hating, de-platforming, virtue signalling and calling everyone a bigot.  Dr Anon is known to the editor.