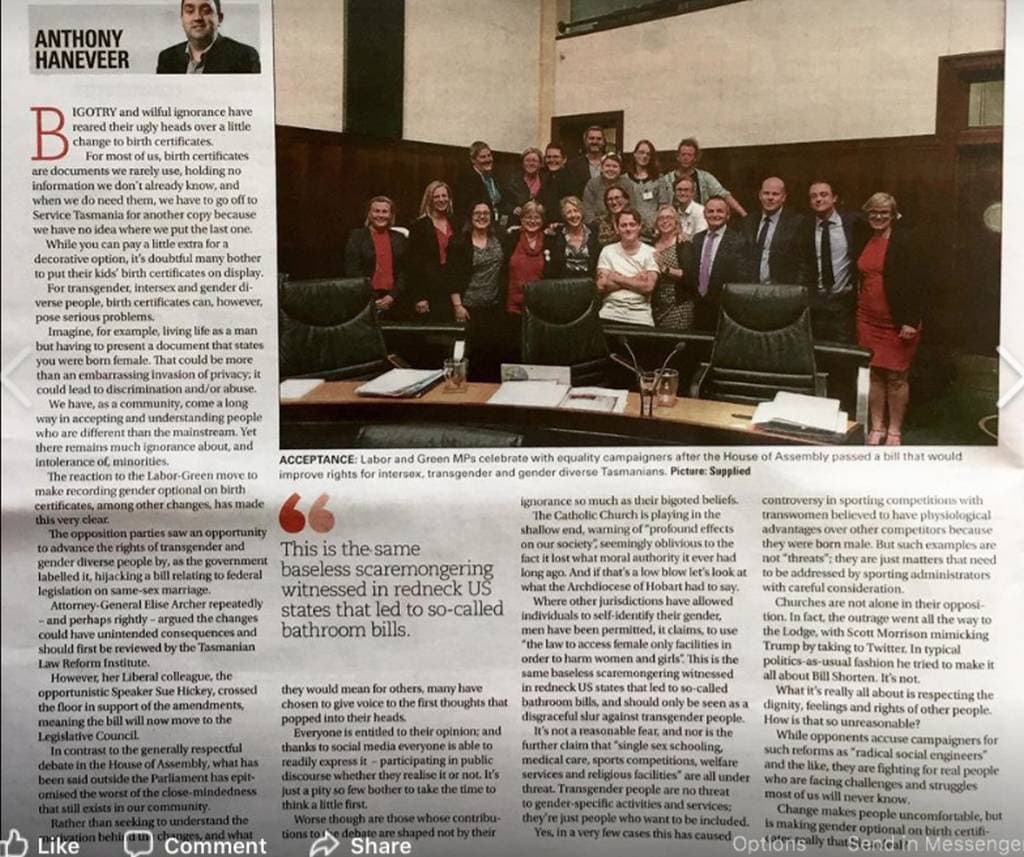 The opinion piece below was written in response to Anthony Haneveer’s article published  in the Advocate newspaper on 23 November.  The editor of the Advocate, Luke Sayer, has declined to publish it.  He says Women Speak Tasmania has no right of reply since we were not specifically mentioned in Mr Haneveer’s opinion piece.

Mr Sayer further notes that a letter to the editor from Isla MacGregor who he ‘understands is active with our group’ was published in the Advocate on 28 November.

Right of reply or not, it seems the Advocate is reluctant to publish anything that offers more than 150 words in opposition to the pro-trans narrative.

If you’re one of the many Tasmanians concerned about Labor and the Greens changes to our state’s birth registration and anti-discrimination laws you are, according to Anthony Haneveer (the Advocate 23 November 2018), a wilfully ignorant bigot.

If you don’t think 14 pages of complex amendments to a simple procedural bill are just ‘a little change to birth certificates’, join the ranks of said wilfully ignorant bigots.

Reading the text of his so-called opinion, it’s clear Mr Haneveer has made no attempt to interpret or investigate these amendments, made in the name of transgender law reform.

First, if most of us rarely use our birth certificates, and are likely unaware of its location, why are trans people any different?  Are they singled out and asked to produce this document on a regular basis?  The only example we’ve been given – repeatedly – of a trans person being disadvantaged by an incorrect ‘gender’ on their birth certificate is that of a young person unable to secure a job because they have no other age identifying information and prospective employers have questioned the discrepancy between their presenting ‘gender’ and the sex marker on their birth certificate.

But, how likely is this scenario in the age of anti-discrimination awareness?

Every employer, particularly large organisations like fast food outlets and supermarkets that typically employ young people under the age of 17, is acutely aware of their obligations under anti-discrimination law.  They write inclusivity into their company core values, and operational guides, and pay special attention to ‘gender identity’.

If a young trans person suffers discrimination at the hands of a potential employer, would a complaint to the Anti-discrimination Commissioner not be the best and most effective way to draw attention to the employer’s transgressions?

Is it necessary to take a sledgehammer to a birth registration process that has served 99 per cent of the population, including Mr Haneveer, with no problems for many, many years?

Second, I wonder if Mr Haneveer listened to the Lower House debate on Tuesday 20 November last.  It was far from respectful on the part of Labor and the Greens members.  They delivered several lengthy contributions, and read letters from transgender families, and read out, in full, the convoluted text of each of the amendments as they were moved.  The Government members were silent throughout.

When the Attorney-General rose to speak, however, interjections from the Opposition parties were loud and constant, to the point where she had to stop speaking and wait for quiet before she could resume.

Third, Mr Haneveer has totally ignored the opinions, evidence and legislative alternatives put forward by women’s groups, choosing instead to focus on the Catholic Church and its moral bankruptcy.  Talk about picking an easy target for accusations of ‘baseless scaremongering’ and ‘disgraceful slurs against transgender people’.

If Mr Haneveer had chosen to speak to us, we would have provided numerous examples of men identifying as women and gaining access to female only spaces, services and facilities. They have sexually assaulted women in female prisons and women’s shelters, harassed them in female only gyms, and sued them for declining to provide intimate services to male-bodied people.

Obviously it would put a crimp in Mr Haneveer’s pro-trans, anti-trans ‘bigot’ rhetoric to acknowledge these facts, but balance in journalism is generally considered a good thing {unless you’re Mercury journalist, Tim Martain, and the Mercury editorial team – then it’s a journalistic ‘myth’).

Given the overwhelmingly greater propensity of male persons to perpetrate violence, compared to females, it is naïve to assume some men will not take advantage of laws allowing them to easily self-identify as female, and use that legal identity to prey on vulnerable women and children.

Fourth, female people are entitled to safe, secure spaces where male-bodied persons are not present, for a variety of reasons, ranging from embarrassment to significant trauma.  Not every teenage girl wants to see a dangling penis and testicles parading around the change room of their local gym (this has happened, too – we have screenshots of images and comments posted on social media by a biological male transwoman talking about proudly displaying his ‘lady penis’ in the community area of a gym locker room).

Finally, Mr Haneveer begrudgingly acknowledges the amendments could benefit from an expert review.  Such a review is essential.  The drafting is flawed, the use of terminology is inconsistent, untested legal concepts have been introduced, and there are several obvious areas of conflict with existing legislation.

Has anyone asked the government agencies, and other organisations and individuals that will have to administer and interpret these changes what they think about the monstrous legislative debacle now facing them?

And, by the way, framed, decorative birth certificates are popular these days.  Some of my grandchildren have them, ordered and displayed by their parents.