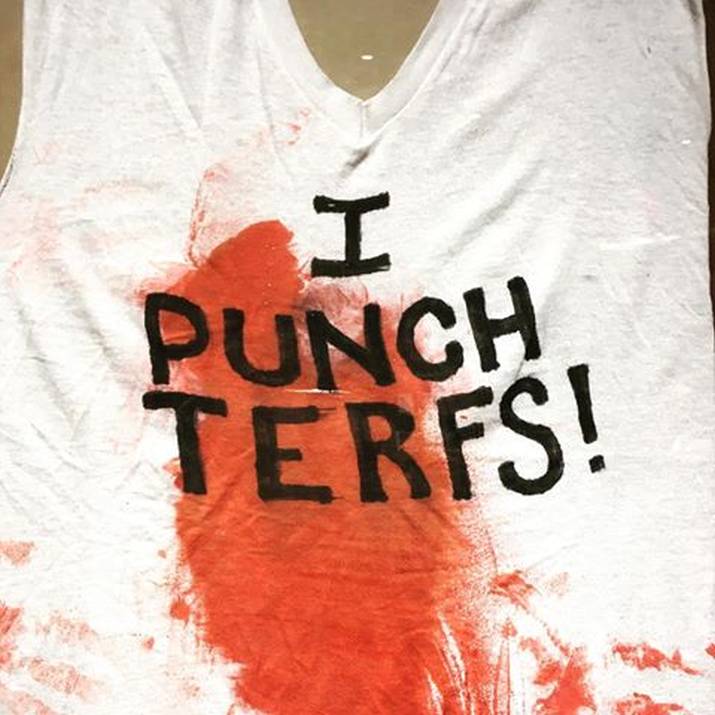 Part One. Silencing and Censorship or Robust Debate?

The recent launch of the group, Transforming Tasmania, which aims to lobby for law reforms that improve the lives of transgender and gender-diverse people, is an opportunity for the community to engage in robust, open and safe discussions on matters concerning gender identity.

The media has an important role to play in such discussions, and needs to actively encourage the expression of diverse viewpoints. Tasmanian media organisations could follow the example set by prominent UK publication, The Economist – https://www.economist.com/transgender – and invite individuals holding a range of opinions on transgenderism and transgender identities to express their ideas in writing in a dedicated forum.

It’s a challenge, and one that media players should have the intestinal fortitude to accept, with all the alacrity expected of dedicated members of the Fourth Estate.

Since 2012 in Tasmania, a number of examples of bullying, threats and intimidation by trans activists against people with different points of view have been brought to light in the media. Until now, several other cases have not been reported.

This article will outline those cases and also provide a broad introduction to media reports on no-platforming and censorship at universities, proposed changes to anti discrimination laws, and acts of silencing and intimidation against critics of trans rights tactics and campaigns.

Australian feminist activist and scholar Germaine Greer, while stating that transgenderism is not her issue, has been repeatedly targeted by the trans rights movement with attempts to have her no-platformed and banned from speaking at universities because of her views on transgenderism. As Claire Lehman said in relation to no-platforming on The Drum –

‘While the stated aim of this approach is to reduce harm, the end result is enforced ignorance. No-platforming does not change people’s hearts and minds, it intimidates people into silence. It is an anti-Enlightenment movement’.

In an open letter published in the Guardian’s ‘Observer’ section in February 2015 titled ‘We cannot allow censorship and silencing of individuals: Universities have a particular responsibility to resist this kind of bullying’, Beatrix Campbell wrote about –

‘….a worrying pattern of intimidation and silencing of individuals whose views are deemed “transphobic” or “whorephobic”. Most of the people so labelled are feminists or pro-feminist men, some have experience in the sex industry, some are transgender.

Last month, there were calls for the Cambridge Union to withdraw a speaking invitation to Germaine Greer; then the Green party came under pressure to repudiate the philosophy lecturer Rupert Read after he questioned the arguments put forward by some trans-activists. The feminist activist and writer Julie Bindel has been “no-platformed” by the National Union of Students for several years.

“No platforming” used to be a tactic used against self-proclaimed fascists and Holocaust-deniers. But today it is being used to prevent the expression of feminist arguments critical of the sex industry and of some demands made by trans activists. The feminists who hold these views have never advocated or engaged in violence against any group of people. Yet it is argued that the mere presence of anyone said to hold those views is a threat to a protected minority group’s safety.’

Campbell’s piece was co-signed by over 130 feminists, activists and academics.

Peter Tatchell, a high profile gay rights activist in the UK, was a signatory to Campbell’s open letter and, as a result, attempts have subsequently been made to no-platform him. He describes this as –

‘yet another example of “a witch-hunting, accusatory atmosphere” symptomatic of a decline in “open debate on some university campuses”.’

Associate Professor Bronwyn Winter from the European Studies and International Studies programs in the Faculty of Arts and Social Sciences at the University of Sydney, wrote in her article ‘Tomboys and sissies: where we’re going wrong’ –

‘There are many things that Peter Hyndal, director of Transformative Solutions, and I agree about. We agree that no human being should be treated with disrespect and that it is unhelpful to express our disagreements through such personalising tactics as pejorative labelling, harassment and bullying, and attempts to shut down events organised by others.

Unfortunately, I am aware of several instances of bullying, by some (mainly male-to-female) transgender people of some feminists and lesbians who disagree with male-to-female transgender claims that they are women just like us and therefore should have unrestricted access to women-only events and spaces.

I certainly know that not every member of the transgender community engages in such bullying, but those who do engage in it are vocal enough, and powerful enough, to do serious damage to women.

Some women are now either too angry or too intimidated to even attend the upcoming IQ2 Debate hosted by The Ethics Centre in Sydney on Thursday March 3, where the proposition ‘Society Must Recognise Trans People’s Gender Identities’ will be debated.

That sort of polarisation, fear and anger are not helpful. We have to be able to have an intelligent and respectful conversation on the politics of gendering, where no one fears bullying or reprisals’.

Banned By Trans: Who’s Silencing Who is a recently published online blog that outlines various cases of ‘assault, unemployment, de-platforming, unpublishing, disinvitation and event cancellation as a direct result of “offending” transactivists’.

The site introduction reads as follows –

‘Transgender ideology is rapidly gaining mainstream attention, popularity and acceptance. Transgender people and their supporters (both hereafter referred to as “transactivists”) often accuse those who disagree with them of the following:

• silencing and “talking over” trans people

However, from our end of things, it seems to be the other way around. Many people, both within and outside of transactivism, agree that it is transactivists who are actively silencing and triggering others, creating a climate in which questions and criticisms of their ideas are not only discouraged, but sometimes outright punished. Even fully transitioned transwomen and “detransitioners” have written about this dangerous spiral of silence in transactivism, and have been ostracized by the trans “community” as a result.’

• Most of the people censored are women, particularly radical feminists and lesbians

• In some of these cases, people were censored for alleged transphobia, but other kinds of bigotry in the same context (particularly misogyny) were not censored

• Transgender people represent an estimated 0.3 % of the US population

• The transgender interest lobby is worth millions of dollars, mostly spent on advertising

• It’s not difficult to see that the amount of rights, sociopolitical power and social recognition that the very small transgender lobby has accrued in a very short time span is vastly disproportionate to the amount of power other marginalized groups (women, people of color, LGB people) have accrued after rallying for much, much longer periods of time.

For instance….there are some protections that trans people have that women and other minorities don’t have (such as, 6-figure fines for “misgendering” while no such fine exists for using racial and misogynistic slurs).

It’s highly unusual, and perhaps even suspect, that a special interest group representing a minuscule portion of the population has become this powerful, this fast, and yet claims that they are “silenced” and “invisible” to society.

And it’s also highly unusual/suspect that 0.3% of the population has been this effective in censoring entire political organizations (such as Deep Green Resistance) and political ideologies (radical feminism).

Other pressures from elements within the trans-activist movement are also gaining increased media attention, particularly the pressure on butch lesbian women to come out as transgender and begin female to male transition.

Tasmanian comedian and lesbian, Hannah Gadsby, for example, recounts an instance of unsolicited feedback in her most recent live comedy show, Nanette. She says –

‘I got a letter on Facebook recently….Dear Hannah, You owe it to your community to come out as transgender. Now, all jokes aside, I really do want to do the best by my community, I really do, but that was new information to me. I don’t identify as transgender. I don’t’.

The Independent report on 8 July this year titled ‘London Pride: Anti-trans activists disrupt parade by lying down in the street to protest ‘lesbian erasure’’’ quoted lesbian activists who demonstrated and handed out leaflets at the Pride rally in London. They said –

Another accused trans people of “pressuring lesbians to have sex with them”, and stated she and other had been referred to as Terfs (trans-exclusionary radical feminists)’.

Lily Maynard, a woman who negotiated a transgender journey with her daughter, and now publishes an online blog titled Welcome to Transtopia, attended the London Pride march. She asked –

‘I have honestly never heard anyone say ‘I hate trans people’. Believing that it is not possible to be born in the ‘wrong’ body is not hateful and erases no-one. We all have a right to our religious and spiritual beliefs, and if you want to believe that souls are gendered and that we have pink and blue brains; if you want to worship at the altar of the gender fairy, then go for it. Nobody can tell you what to believe. Your beliefs are your own business. It’s when you start demanding that everyone around you agrees with you and that if they don’t share your ideology then they must be evil people who hate you and wish you ill; that they must be silenced – well, that roar is the sound of transactivism rearing its tyrannical, despotic head.’

Pride & Prejudice – who is standing with lesbians? #GetTheLOut

Gender Apostates is a group of women and transwomen who are challenging the trans rights movement. Transgender woman, Miranda Yardley, writes –

‘Transgender ideology is in a state. Its central ideas are inconsistent with each other, have little support in science or the ethics of power analysis and are so divorced from reality they require a complete suspension of disbelief in order to sit in one’s head without suffering cognitive dissonance’.

While drawing a distinction between transsexuals and those who identify as transgender, Miranda Yardley outlines 12 actions that those who support transgender ideology can take to support the lives of women including –

‘To accept that sex and gender are not the same thing. Sex is a biological reality based on reproductive potential, and gender is a social system that harms women through stereotyping behaviour, by giving women the negative stereotypes and men those that are positive; gender itself is oppression, not a civil liberty. All transwomen by definition are biologically male, socialised as boys then usually ‘transition’ as adults, although in the present climate it appears to be coming acceptable for children to ‘transition’, which should be examined critically rather than accepted unconditionally. That our underlying biological reality remains fundamentally unchanged is not a value judgement, it is a morally neutral statement of fact, neither good nor bad, it just is and being a woman is not a feeling or an opt-in’.

‘To cease insisting that language specific to describing over 50% of the population be erased to indulge the fragile egos of the 0.3% of the population that is trans. This means respecting women’s right to be able to describe their own bodies and experiences and also getting rid of the inherently redundant and coercively imposed ‘cis’; we already have a word for ‘women’ and that is ‘women’. Penises are the male sex organ, vaginas are female; this is how human reproduction works’.

Transgender Ideology Does Not Support Women

Part Two in this series of articles will discuss instances of bullying and suppression of debate in relation to transgenderism that have occurred in Tasmania. They concern actions taken by the following persons and organisations –

*Isla MacGregor has for many years been an advocate for free speech and public interest disclosures.