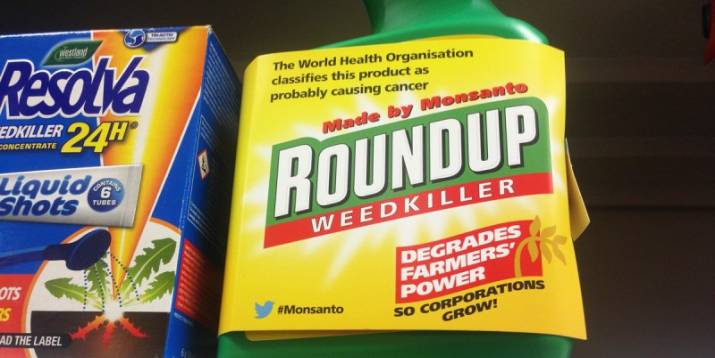 A California jury has awarded school groundsman Dewayne Johnson $289 million for his terminal non-Hodgkins lymphoma. The jury found, on all the scientific evidence uncovered during the month-long trial that his exposure to Roundup weedkiller caused Mr Johnson’s cancer.

If the jury’s decision is upheld on appeal thousands of other victims of Roundup are waiting to have their cases heard. Another case already in the US courts alleges that adverts for Roundup falsely claimed the mixture does not impact human health but glyphosate residues harm human gut bacteria on which our health depends.

The UN’s International Agency for Research on Cancer (IARC) found in 2015 that Roundup’s active ingredient glyphosate is a ‘probable human carcinogen’. But Monsanto sought to discredit the committee’s members and their findings about the world’s most used agricultural chemical.

“The Australian Pesticides and Veterinary Medicines Authority (APVMA) rejected IARC’s findings and judged Roundup to be safe, if the label guide is followed. Yet Roundup’s label says nothing about safe use, health impacts, or the need for safety protection.

“After the IARC report, the insurance and work safe industries issued warnings that employers using Roundup, such as farm owners, local councils, LandCare etc. may be liable if worker, volunteer or public health is affected. These organisations should now cease their weedkiller use or risk being sued for breach of care to workers and citizens. There are safe alternatives to kill weeds.

“Roundup is available from most hardware shops and supermarkets. Retailers should review their liability for selling an unsafe product and take it off their shelves.

“Farmers, land managers, gardeners or citizens exposed to Roundup or its residues who now suffer non-Hodgkins lymphoma may also have a strong case for compensation. Farm use of Roundup, especially as a pre-harvest crop spray which leaves residues in food must be prohibited now.

“The federal government should immediately reinstate the Farm Chemicals Reassessment and Reregistration Scheme, cancelled in 2014.

“Another urgent review of Roundup in light of the new evidence discovered during the US trial is essential.

“A Senate Inquiry would do a better job of resolving these toxic questions than the APVMA which has already shown itself to be partisan,” Mr Phelps concludes.

• Anthony Amis: Friends of the Earth reaction to Glysophate court case Friends of the Earth Australia today welcomed a decision in the Supreme Court of California to award school groundskeeper Dewayne Johnson US$289million in damages after Johnson took legal action against pesticide company Monsanto. Johnson was diagnosed with Non-Hodgkins Lymphoma in 2014. His lawyers argued that Johnson’s regular use of Glyphosate, which he used up to 30 times a year in his work, caused the disease. Monsanto is facing 5,000 similar lawsuits across the United States. The jury in the Johnson case deliberated for 3 days before deciding the verdict …