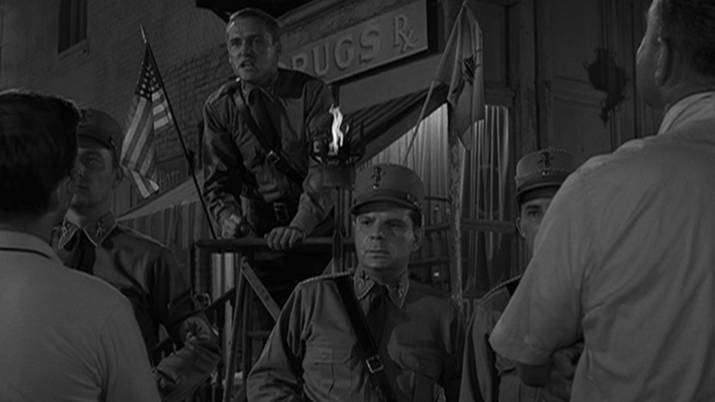 Recently, David Gee and Campbell Markham spoke as witnesses in the parliamentary inquiry into religious free speech. During this inquiry, David Gee personally spoke in defense of the free speech of neo-Nazis.

David Gee has tried to compare his street preaching in the Hobart CBD to “talking quietly in a small cafe”.

This comparison is extremely misleading.

David Gee is intentionally vague or misleading when he talks about “free speech” in order to blur the lines between a private conversation, and loudly shouting at members of the public with (and without) a Hobart City Council permit.

David Gee has essentially, in a parliamentary inquiry, endorsed the free speech of neo-Nazis in the sense that the Hobart City Council should provide them with a Speakers Spot permit, just like his own, or allow them to simply shout from any street corner they choose.

This would not only legitimize neo-Nazi views on a civic level, but allow them to behave in the exact same way that David Gee does when pushing their message onto the public, which is far from just a “quiet conversation” in a small cafe.

Furthermore, David Gee made use of Anti-Discrimination laws in order to force the Hobart City Council to create the Speakers Spot area in the CBD in the first place.

These Laws are so far at odds with neo-Nazi values, it would make it essentially impossible for them to adhere to the permit rules and guidelines for the area in the first place.

What I find particularly interesting about David Gee’s argument is that it is an argument I myself used frequently when openly defending his “free speech” in the past. I would often explain to members of the public that we should be able to hear these ugly views and openly refute them, such was my approach to David Gee himself.

What I never intended, however, was for the Hobart City Council to provide neo-Nazis with a similar permit to David Gee, and allow them to shout their views up and down a busy shopping district in Hobart’s small CBD area, parading Nazi Swastikas outside of local businesses and intimidating staff and customers with total impunity.

It was only after I spoke to the staff of one local business to find that they had been “reduced to tears” after a phone-call from Equal Opportunities, made at the behest of David Gee, that I realized I had fallen for his “free speech” rhetoric. Not long after this, I launched my own complaint against Gee.

While I am not yet in a position to say for sure what can or cannot be said in a private conversation or venue, I can say with absolute certainty that I unequivocally oppose neo-Nazis having the ability to express their views in the Hobart Speakers Spot or on street corners in the same way that David Gee expresses his.

I would note that many white-supremacist groups utilize a bastardization of biblical scripture to justify their own rhetoric on the grounds of “religious free speech” which, while not representative of modern Christian values, could be defended by the same legal arguments that David Gee is attempting to lay the groundwork for.

Whilst David Gee has openly denounced neo-Nazi ideology, this dog-whistle will be heard by that element in our community who will be nonetheless quietly praising Gee for speaking up for them in this way.

To fully understand the similarities in public debate between David Gee and neo-Nazis themselves, I would refer to this quote from Jean-Paul Sartre taken from his book Anti-Semite And The Jew:

‘Never believe that anti-Semites are completely unaware of the absurdity of their replies. They know that their remarks are frivolous, open to challenge. But they are amusing themselves, for it is their adversary who is obliged to use words responsibly, since he believes in words. The anti-Semites have the right to play. They even like to play with discourse for, by giving ridiculous reasons, they discredit the seriousness of their interlocutors. They delight in acting in bad faith, since they seek not to persuade by sound argument but to intimidate and disconcert. If you press them too closely, they will abruptly fall silent, loftily indicating by some phrase that the time for argument is past.’

What is David Gee willing to sacrifice in the name of “free speech”? Has he really defended the rights for neo-Nazis’ views to be treated just as fairly as he feels his should be? Has he really placed his own personal religious beliefs on the same table as Adolf Hitler’s demented moral compass? Perhaps David Gee would like to give a speech at the next Anzac Day parade on this subject of neo-Nazis free speech … I myself would be keenly interested in hearing his views.

*Sam Mazur is an Atheist, and was involved in an Anti-Discrimination complaint against a local street preacher for what he saw as degrading comments made against the LGBTQI community, although he is not himself a member of that community.