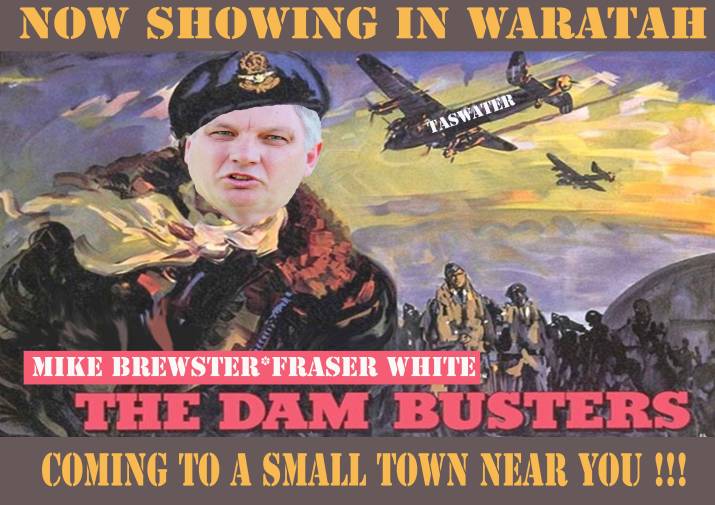 Ad hoc pieces of timber hammered in between sections

What seems clear from last Tuesday’s (13.2.2018) ‘consultative’ meeting in Waratah is that TasWater, as an authority, have very little-to-no concept of community and social licence.

Their decision to decommission Waratah Reservoir Dam is purely financial and they have understated the cost of their proposed actions whilst overstating the costs of alternatives of repair to the damages they have caused to the Dam.

The Waratah Reservoir Dam forms part of an interconnected and complex system of water storage and flood mitigation which has stood the tests of time (100 years).

To destroy one part would impact on the function of the remaining structures.

Drinkable water storage is the most valuable commodity in the world and essential to the community and environment, as well as being used for irrigation, firefighting and a potential source of hydroelectricity.

TasWater’s failure to recognise this or to admit to their systematic failure to manage the Dam’s risk factors over the last four years is plainly incompetent and negligent. At the handover from Cradle Mountain Water in 2013, TasWater was given a list of 13 Risk Mitigation measures – not one of them have been implemented in the four years since TasWater took over the responsibility for the Dam.

As one informed resident pointed out to them “you broke it – you fix it.”

Ego and the Psychology of the decision-making process is now at play where TasWater is reluctant to admit and make good their mistakes, as a good Public Utility should.

In defence of their flawed argument they are reaching for emotional and hypothetical excuses to justify their decisions, and dismiss or attack valid community arguments and complaints as being unreasonable or emotional.

If the Dam were to fail it is more likely to be through a pipe developed due to lack of and poor maintenance, and the result would be a slow rise of the water level.

The vision TasWater’s CEO Mike Brewster would like us to see of a torrent of water rushing down the valley washing children off their bikes is statistically and physically unlikely.

What is more statistically likely is someone being burned to death by a bushfire or house fire due to a lack of available water to the local volunteer firefighters if the Dam is removed.

Water is fast becoming the number one issue worldwide where even right at this minute the legislative capital of South Africa, Cape Town, is set to run out of water as a direct result of similarly incompetent and negligent water management by the authorities.

However, a very real and imminent risk has been identified by the Community in the lower Waratah Lake where the TasWater Water Treatment Plant is situated, but when it was pointed out to the TasWater at the meeting, it was dismissed with “We don’t own that.”

A small weir next to the Caravan/Camping ground, which holds back all the water that the TasWater Treatment Plant essentially requires to deliver water to the whole town, is in a deplorable state of repair. This substandard structure is completely rusted and ‘someone’ has jammed sub-standard knotted and bowed pine into the failing brackets. If this goes, and it will, there will instantly be no drinking water and no firefighting capability whatsoever.

Why does TasWater dismiss these concerns off-hand as “it’s not our concern”? This is negligence and a failure in Duty of Care to the public.

Tourists, children and their dogs cross the small rocky outflow just 4 metres below this particular weir wall every single day. This is the most immediate threat to the Public yet TasWater doesn’t want to know about it, in my view!

However, back to the Waratah Reservoir Dam – in the event Mr Brewster is truly concerned by children on bikes, or that the Dam wall was as precarious as he says, TasWater has again shown its poor Risk Management behaviour as there are no water height indicators on the road over the river in town, no signs warning of a potential rapid rise in water level in the Waratah/Wynyard Council’s Caravan/Camping ground situated directly adjacent to the outflow downstream, and no emergency procedures for such an event.

Our own models and evaluations of the catchment seem to indicate what Mr Brewster would like us to fear most, a flash flood, may actually be more likely to happen if the dam is removed as there would be no mitigating buffer against sudden extreme rainfall events.

So we have as an analogy a situation where Mr Brewster has borrowed your car for a weekend away.

He has driven it around the state and the oil light came on and then the thermostat showed a rise in temperature but he ignored it.

You complain that he has broken your car and you want him to fix it.

He suggests that to repair it costs more than the car’s worth so he doesn’t want to pay for it.

He suggests you are being irrational and would probably be better off walking and don’t really need a car anyway.

In fact he suggests he is doing you a favour by not fixing your car.

Mr Brewster is selling a lemon and the residents of Waratah are not buying it.

*Bill Smith is known to the Editor

• Is TasWater the new Forestry Tasmania … ?