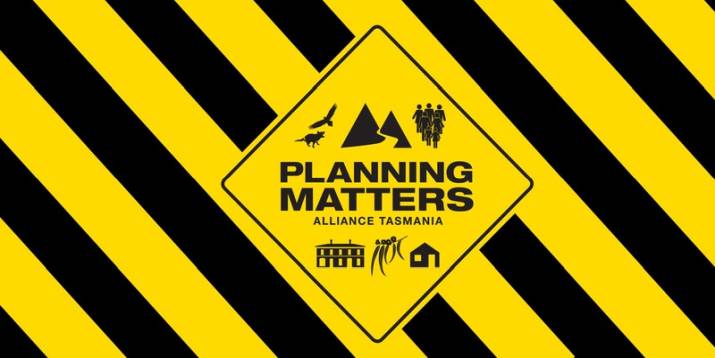 Today the Planning Matters Alliance Tasmania released its Planning Policy Election Scorecard. The scorecard launch comes as PMAT commences its second election television advertisement. The advertisement links the duel issue of private commercial development in reserves and the high rise hotel proposals and the simple fact that the public could have absolutely no role in the assessment of these proposals, or rights of appeal.

PMAT has scored the three main political parties planning policies against ten criteria that reflect PMAT’s priorities for making the planning system stronger. Overall the Greens are strongest on planning policies, scoring 9.5 out of 10, the Labor Party gets a pass, with 5 out of 10, and the Liberal Party get an abject failure with just 0.5 out of 10.

The key findings from the scorecard process was that the Liberal Party is committed to changing legislation to limit who can take appeals over development approvals and have made many more developments permitted (which removes the community’s right to comment on and appeal developments). It also supports major projects legislation that would give the minister unprecedented powers to call-in developments, taking the assessment away from councils and removing the community’s appeal rights.

PMAT Coordinator Sophie Underwood said “The most telling outcome of the scorecard is that the Liberal party stands alone in wanting strip away basic rights for the community to have a say over development proposals and to appeal development approvals, so it can force through developments the community does not support.”

“The Tasmanian Planning Scheme and proposed Major Projects Legislation reduces protections afforded to the special things that make Tasmania unique and reduce or completely shut out the community from involvement in development decisions.”

TCT Director Peter McGlone, who help score the party policies, said that “The Liberals are determined to remove any effective influence the community has in our land use planning system, while pursuing a business first approach. If Mr Gutwein is allowed to fully implement his party’s policy agenda it will take us back thirty years and seriously damage our democracy. The Liberals want to centralise too much power in the planning minister and remove hard fort community rights.”

“The Liberal’s major projects legislation has left open the door for controversial developments such as the Fragrance Skyscrapers and Mount Wellington cable car projects to be fast tracked, providing the community with no right of appeal.”

Sophie Underwood said that: “While Tasmanians are facing dozens of private commercial hut, lodge and helicopter-based developments in their favourite parks and reserves, it’s important to realise that under the Hodgman Government’s planning scheme, they’ll lose the guarantee of community consultation and the rights to appeal. “The Liberals also want to introduce a system where a neighbour’s right to sunshine and privacy in their own home and garden are not protected and can be taken away without any right to have a say.”

“In contrast the scorecard process found that the Greens and Labor Party are strong defenders of existing appeal rights and both oppose the Liberal’s major projects call-in powers. “

“The Greens would guarantee the community has a right to have input on the assessment of any development in national parks and reserves while the Labor Party has flagged its concerns at the Liberal approach and are committed to a review to look at this issue. Both Labor and Greens parties have flagged the need to review residential planning rules that relate to neighbours rights to sunshine and privacy.”

Other key findings include:

• The Greens are superior to Labor in terms of protecting our coastline from ribbon development.

• Critically Labor have baulked at supporting the need for all major industries to be integrated into the planning system – they continue to support a system that provide special deals for fish farms, forestry and major dams. While the Labor party has supported the need for planning policies only the Greens have supported State Policies and have put forward specific priorities.

• At the last election the Liberal Party promised to develop planning polices, that should have provided the community a say over the objectives of the proposed new statewide planning scheme, but planning polices have not be delivered.

• Labor has flagged the need to have biodiversity and cultural heritage properly considered in the planning decisions but again the Greens have been much stronger, making specific commitments to changing the planning scheme to provide protection.