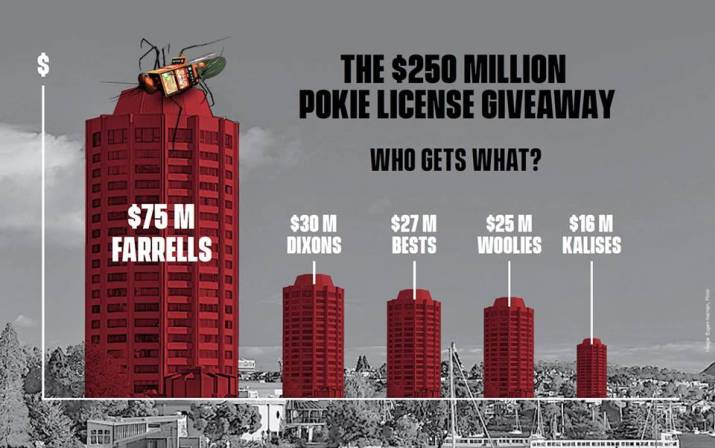 “Greg Farrell Jr, “Mr. Mulawa”: Greg is by nature very hands-on – activity done translates into learning and understanding – and he still applies this essential quality to the horses with ambitious zeal and earnest dedication. Greg is a natural horseman – his innate affection for and confident ease with horses is readily apparent in his daily interaction with the horses at every level. Although Greg’s primary vocational responsibility has always been Managing Director of Federal Group (the highly successful and widely respected Australian owned family business and the world’s second oldest hotel group), he always finds quality time for the horses. He remains integrally involved with all the handling and training of the Mulawa Arabians, from early breaking through the professional turn out of top level show ring performers in hand. (Pictured with ADVENT) “

The Liberal Party’s pokies policy gives the poker machine licences directly to pubs and increases the share they keep from 30 cents to 50 cents of each dollar lost by players.

The Liberals are giving these licences to the pubs for free. There will be no tender or charge for these licences, they will be just given. The licences are worth $250,000,000.

Pokies also do another harm. They harm the governance of our state.

Ray Groom’s Liberals granted the first pokies licence in 1993. Greg Farrell had argued passionately against them leaving his casinos because they ‘would have a disastrous effect on the social and special culture of Tasmania.’ Pokies first harmed Tasmania’s governance back in 1993.

Labor won the 2002 election. Pokies weren’t mentioned in their campaign, the licence would expire in 2008. They would be an issue in the 2006 election.

The first legislation Labor (with Paul Lennon as Gaming minister) put through was an ‘early extension’ to the Farrells’ pokies licence, extending it until 2023. Paul Lennon is now openly paid as a Federal Group lobbyist. Pokies harmed Tasmania’s governance back in 2003.

Liberal and Labor both have a sordid history with pokies’ licensing deals. In 2018 its the Liberal Party’s turn to be involved with pokies-driven poor governance.

Over 60 of Tasmania’s 89 pokies pubs are operated as chains, controlled by just seven families or groups, and will receive most of the Liberal plan’s largesse.

The value of the licences to these chosen 7 depends on how much players in the pub lose.

6. ECB has the Old Tudor Inn, The Bayside Inn and The Foreshore Tavern and get $10 million worth.

These seven groups are being quietly handed a staggering $196,000,000 by the Liberal party. Some single operator pokies pubs, those who successfully take large amounts from their pokies customers, will benefit as well. The Shoreline Hotel in Clarence will rise in value by $6,500,000 the day the Liberal policy is enacted.

Treasurer Peter Gutwein doesn’t disagree about the $250,000,000 value of the licences he will be giving away for free. He says his one-off gift will be recouped over the life of the licences through collected taxes. He is wrong.

Gutwein will raise taxes on pub pokies but drop them on the casino ones. The extra taxes on the pubs would gain Treasury an extra annual $20 million but lowering the casino rate will cost Treasury $11 million.

From the net Pokies’ tax increase of just $9 million Treasury and Gaming have warned that the compliance and monitoring costs of the Liberals’ single operator model increase substantially. Those costs on the current monopoly operator licence are already $5 million a year and are likely to at least double with the 96 venue operator model, to at least $10 million a year. Treasury will get only an extra $4 million in tax benefit from the Liberal policy.

The Liberals plan to give away pokies licences worth an immediate $250 million on the hope of a return over the twenty-year term of the licence of $330 million. Peter Gutwein prefers a hypothetical bird-in-the-bush to a tangible $250,000,000 bird-in-the-hand. A bird that would be of great benefit to health or education in Tasmania right now.

Will Hodgman told the Examiner last week, not once, not twice, but three times that the pokies licences would be going to tender and that his party would get the best value for Tasmanians.

Up for open tender will be the “networking operations”. Under the current monopoly arrangement this operation has been done by Network Gaming, wholly owned by the Farrell family. For this work Network Gaming is paid 30 cents out of every dollar lost to pub pokies. This payment, under Liberal policy, will drop to just 2 cents in every dollar lost, making the tender one for an insignificant part of poker machine operations.

The Liberal policy doesn’t do what Will Hodgman says. The licences aren’t going up for tender and Tasmanians won’t be getting the best value under his policy.

It’s impossible to say why the Liberals have such a poorly-conceived policy.

Leaving aside the fact that their support of the poker machine industry is repugnant, their management of the financial aspects are simply disgraceful. It smacks of financial incompetence and has a mighty whiff of corruption of governance.

Those who will gain from the policy are fighting hard to put the Liberals into a position to deliver the $250,000,000 immediate windfall and then a further 20 years of regular profits.

Everywhere in the state is a sea of blue signs and billboards. Every minute on TV is filled with pro-pokies and Liberal ads. Radio is relentless.

Last Saturdays front to back full page in the Mercury ads was simply stunning.

Is our democracy for sale, or has it already been bought?

*Pat Caplice convened Rein in The Pokies ( https://www.facebook.com/reininthepokies/ ) a Facebook community group. He is Tasmanian representative for Bad Bets Australia.

Hey diddle diddle
The cat and the fiddle
Cash cows, every gaming room
The little blog laughed
To see such fun
And the dish ran away with the spoon

Hey diddle diddle
Bass cats – they a fiddle?
The Lambie wants them back soon
Pork, backhands and shaft
Were how things were run
But the dish* ran away from the hoon**

*Rebecca White
**Imagine who this would be, it isn’t hard to do

• James Boyce: Will the ALP Dance to Lennon and Old’s Pokies Play List?