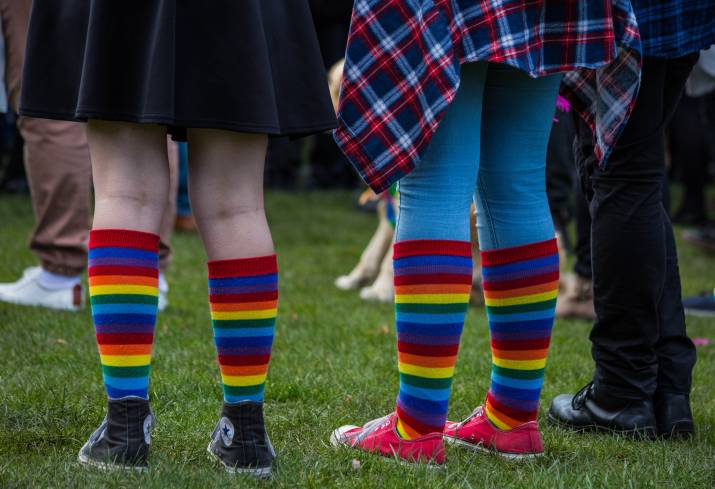 With a truly wonderful outpouring of emotion at 5.58pm Friday evening at that moment the parliament erupted in what I’m sure was the most a heartfelt joy ever expressed in the chamber of the new parliament house. It was so good to watch. It would have been nice to have been there, but would it? Whose victory was it that the MPs were celebrating?

The applause and cheers were instantaneous, a rainbow flag was unfurled, there were tears of joy and singing from the public gallery for all the world to see. And I hope that the world did see our joy our happiness and our long awaited victory, victory over prejudice, a victory over hate and a victory for every gay and lesbian person who didn’t live to see the day.

From the floor of the house the MPs moved to mix and share their happiness with the waiting crowds and the media. Speeches followed … it seemed to me that almost everyone wanted their moment in the joyous rays of a new and oh so queer sun.

From watching TV last night and again this morning you might be forgiven for thinking that the war for SSM was won by men in $3000 dollar Italian suits and Hermes silk ties, gay men and women who live in some of the wealthiest and most fashionable suburbs in Australia and represent these suburbs in parliament. In fact, it’s now fashionable to have a queer MP especially it seems a queer Liberal MP or, if it isn’t, I’m sure that it soon will be.

The new leaders of the LGBTI community were it seems all high-profile figures who were staring into cameras and telling us how wonderful this day was and how long they had fought and dreamed of this day. No doubt for a few this was true, just how many? I could not help thinking that far too many were like Johnny latecomers to the fight and who were now milking a victory that was not theirs in the hope that it will enhance their careers. I hope I’m wrong but I fear I am not.

Where the families of the men who were thrown off cliffs and into rivers; beaten and bruised by thugs who thought that poofter bashing was a good way to end a night’s drinking in the 1960s?

Where were the widowers whose partners died premature deaths in the early 1980s? Where the gaunt grey faces that looked up from hospital beds in the vain sad hope that their parents, siblings, family would visit them one last time before they too died.

If I didn’t see the victims and their families I certainly didn’t see anyone who even came close to fitting the old gay stereotypes, a gay gathering without a camp man, a drag queen or Tom of Finland fan, a bear or two I don’t think so. Didn’t anyone think to invite them? If not, why not? Boring!

Of course no one invited the one’s who dared break the rules or the gays who lived their lives on the edge they are now consigned to history. Clearly last night was for the new queers the rainbow loves the nice folk those who went to good schools, have good well-paying jobs, those who wear expensive clothes and Rolex watches. The gay alumni of Melbourne or Sydney Universities law and medical schools?

Oh how wonderful it is that Peter and Tony can propose and declare the love that once was that well of loneliness on tonight’s evening news. How wonderful is it that Caroline and Stephanie can finally get married and make a home together in Toorak or Balmoral Beach or without having to feel they aren’t being discriminated against at home or on their honeymoon in the South of France. Is this what the 78s marched and were jailed for is that to be their lasting legacy, I hope not?

*David Chadwick a bio is on its way