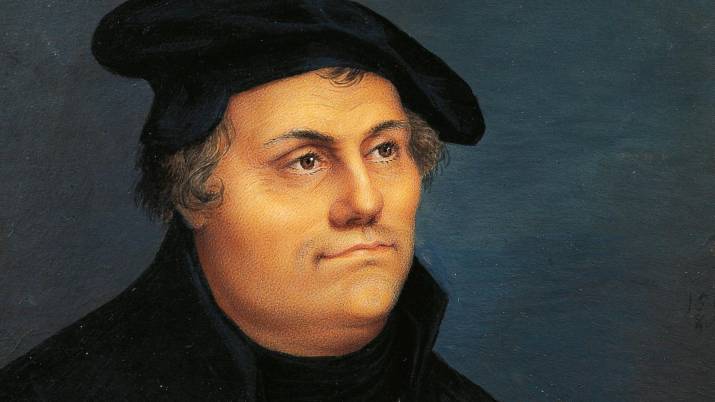 On Tuesday, 500 calendar years^ ago, a young monk in a small town in Germandom* took a heroically principled stance against his Church’s corruption and tyranny. In many ways, the tally of its effects still “too early to tell” (go google).

Martin Luther’s~ act of nailing a list of objections (called his ‘95 Theses’ – take care with that first consonant!) to the beliefs and rituals, corruption and tyranny of the Roman Catholic Church set off such trains of events that both our Western world and the world at large were “changed, changed utterly”.

On the ungodly side, there was a century of religious war to 1618 (France had seven in 36 years, with “Paris is worth a Mass” helping to end them; the British Isles had three to seven, depending on how they’re counted and who’s counting), many of them more vicious and cruel than any in the previous 1000 years.

But worse was to come, the most murderous and savage of them all, the 1618-1648 Thirty Years War, a trans-European war so mass-murderous and cruelly savage that most Western Europeans turned off sectarian hostility as worth fighting for. (Some exceptions, of course.)

A minor (‘minor’ in the contest of the previous paragraph) effect was the unleashing on the Protestant world of a narrow-minded and joyless Puritanical wowserism which included more vandalising of art^^ than the barbarians of the Late Roman Empire could have dreamt of (actually, that was not one of their dreams) and culminated in that tragic and futile era of Prohibition in the 1920s US.

On the humanly progressive side (as distinct from our Left’s ‘progressivism’), the Reformation was a harbinger of individual liberty because its theology asserted that individual believers had the right to read their Bibles in their own languages, in their own time, forming their own interpretations, totally bypassing the clerical /sacerdotal middlemen of Popery and their ‘official’ versions and interpretations.

For one aspect of cultural liberation in our heritage – http://www.theaustralian.com.au/news/world/the-times/while-visual-realm-suffered-reformation-energised-english-literature/news-story/84222507b1991fa4ae9931262f849287

For us, the Reformation culminated in 1688/89s Glorious Revolution which ended any chance of a reversion to absolute monarchy / Spanish-style Papal tyranny, strengthened the gathering Scientific Revolution, evolved into the great age of personal liberation in the 18th century Enlightenment and led to the American revolutionary ideal of “government of the people, by the people, for the people”.

And to the distinctly different French Revolution. But that’s another story in another stream of history.

^ ‘calendar years’ rather than ‘sidereal years’ (go google it) because of the Julian calendar to Gregorian calendar switches, which is why Russia’s October Revolution occurred next month.

* at the time, ‘Germany’ was, in words made famous four centuries later, just a “geographical expression” – google [List of Holy Roman Empire states].

^^ we’re now getting hit with a Gaianist “narrow-minded and joyless . . wowserism”; plus ça change! Keep Macaulay’s quip in mind: “The Puritan hated bear-baiting, not because it gave pain to the bear, but because it gave pleasure to the spectators”.

*Leonard Colquhoun taught Years 9 to 11 English and English Literature, together with HSC English in the Victorian and NSW curriculums. Although he rarely got to choose what novels, plays and poetry were in the syllabuses, he was equally rarely disappointed at what was allotted, because “gladly wolde he lerne, and gladly teche” [The Clerk in Geoffrey Chaucer’s Canterbury Tales – line 310]. Teaching some of the world’s great literature – what’s not to like? He reckons that 90% of problems in Australia’s schools would be 90% solved if 90% of lessons were by teachers who knew their classroom subjects in depth and breadth, and who had the classroom and allied skills to do so. He hopes one day that education ministers and their bureaucrats, and that university education faculties and their professors, will see things that way too, and that education ministers will tell university authorities that sub-standard graduates will not be registered to work in classrooms. He is particularly contemptuous of those who diss (what is now called) ‘direct instruction’, those who put more faith in faddish gizmos than in well prepared teachers, and those who have the delusion that long-term ‘assignments’ and ‘projects’ can substitute for their own ignorance and incompetence.