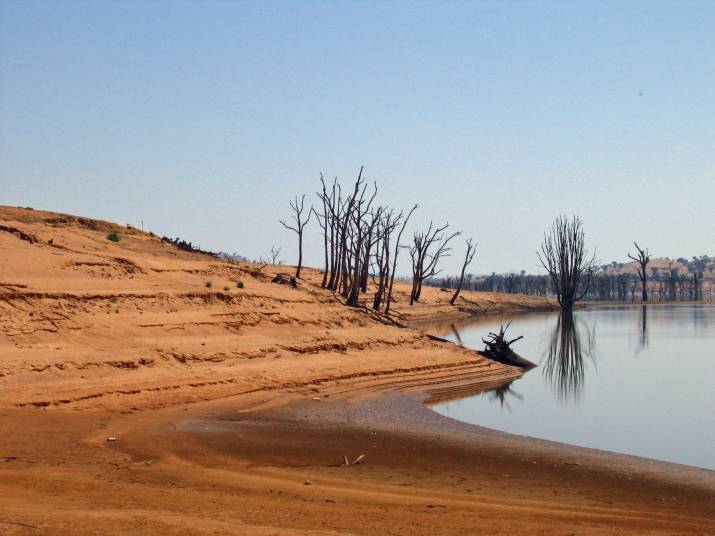 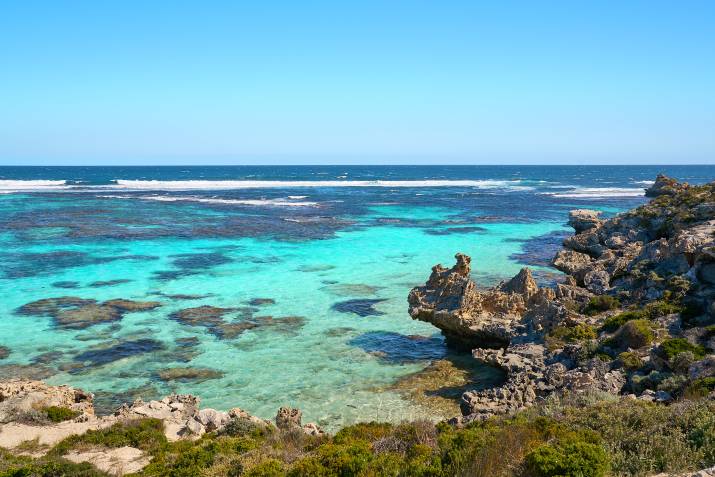 Pedro Szekely’s Flickr pic of an Australian coastline … as Lyndall says: ‘I know the article is about destruction; but it is also about our (still) beautiful country which we need to appreciate and care for’

This. Is. Serious. Part of our great and beautiful country is being plundered and crying out for help, but hardly anyone is stopping to listen, let alone act accordingly.

Did anyone else see Lateline on ABC TV last (Wednesday) night1? I watched it, with incredulity, and was angered by the apparent level of wanton over-exploitation of the river that is causing these terrible and even life-threatening effects downstream.

In this case, many farming families and their farm businesses, as well as small communities, along the Darling River, are bearing the impacts caused by just a few. More disturbingly this exploitation seems to be widespread, with a former Murray Darling Basin Authority senior manager stating she had to quit after working there for twelve years “because of what she describes as the wholesale ‘perversion’ of the scheme’s intent”.

With breathtaking irony, this story aired on the same day as news broke about Barnaby Joyce, the federal ex-Minister for Water, who had just been awarded $40K for his exemplary work, presumably whilst in government: “Mrs Rinehart personally handed him the inaugural National Agricultural and Related Industries prize, calling him a “champion of farming.”2

(On a side note: At least he has handed the cheque back. He really had no choice. But, even so, I think the perception created by this prize, and its similarities with a well-known potentially corrupting influence, won’t go away; i.e. political donations causing a potential conflict of interest in government).

But, how could Barnaby justifiably win an award for his excellent work while Minister for Water (as well as agriculture), given the troubles emerging about Murray-Darling water management? (Or am I missing a potential technical loophole here? Was he awarded $40K in his current capacity as a private citizen for his own excellent farming work?).

Earlier this year a corruption scandal aired on Four Corners3 which involved the most senior water bureaucrat in NSW4. The episode was full of damning evidence to show that the Murray-Darling system was being used and effectively abused by a favoured few for their own purposes.

So there was already well-publicised knowledge of major management and oversight failures, which effectively brought an operating threat to the sustainable use of water in NSW as well as to the integrity of the Murray Darling Basin Plan. Also well-known were the NSW ICAC and a departmental review that are still underway. Despite all of this – and completely regardless it would seem – Barnaby still got awarded first prize from his industry peers … ?

But there’s more; it gets worse (in my book). This is all happening under Barnaby’s ministry and, you’d think, would be of extreme interest to him in his federal water management role, and goes to his responsibility for the proper implementation of the portfolio, albeit at a state level in this instance.

Yet, in response to the Four Corners’ expose of appalling exploitation and possible involvement of criminality, Barnaby Joyce, the then Minister for Water, Minister for Agriculture, Deputy PM, sometimes Acting PM and leader of the National Party, arrogantly spruiked his ‘I’m one of you’ farmers’ credentials in a pub, saying:

“We have taken water, put it back into agriculture, so we could look after you and make sure we don’t have the greenies running the show basically sending you out the back door, and that was a hard ask”. ” And: “A couple of nights ago on Four Corners, you know what that’s all about? It’s about them trying to take more water off you, trying to create a calamity. A calamity for which the solution is to take more water off you, shut more of your towns down.”5

… Yeah, right. The greenies did it. What a load of old codswallop. Does he really think this matter is so trivial, of such little consequence, and actually sees it as a greedy greenie-inspired plot of blown-out proportions designed to rob essential water from farmers and rural townships?

This, propaganda and misinformation, from the mind and the man who has been Australia’s Acting Prime Minister and held the powerful position of the then-but not now-but will be again Minister for Water. Really?

The Murray Darling Basin Plan is the first genuine attempt of its kind and a critically important plan for the sustainable use of water. Its development was a massive task, using the rigour of science and the knowledge and experience of numerous contributors (private citizens and public institutions), to determine total capacity; set targets and limitations; and find an overall balance between and amongst usage, social and environmental needs.

This was a very long, bumpy and painful process; and during the Gillard years, I recall the Coalition fought hard against it; but the task needed to be done because the Murray-Darling river system was dying. Granted, the plan isn’t perfect – nothing ever can be when dealing with nature and people, (double whammy), let alone the difficulties dealing with the large landscape scale and variety of needs – so over time, on occasion, it may need some tweaking or even review. But it is nevertheless a grand and visionary plan to share the water fairly and sustainably amongst all users (i.e. human and other living things) that rely upon the continued ecological health of the entire system. That is, if it is implemented fully, competently and with the best intent from all involved.

Sadly though, in practice we see something else; and it is at odds with the “greenies running the show” conspiracy theory eagerly spread around by Barnaby. To the contrary, it would appear to be the farming sector that has spawned this very select but powerful few that have been robbing their fellow farmers dry and are culpable, greedy, and the ones running the show.

On TV we have just watched ordinary farmers desperately crying out for help in NSW, with their children getting sick from contact with the putrid river water, and many more farmers running out of water – for irrigation, stock or even domestic use – for months on end.

We’ve also just heard today that the positionally unfortunate South Australians who, being last in line and only getting the dregs, are now considering their own state royal commission into matters upstream. Lastly, in NSW, the current ICAC and departmental review will likely reveal the dirty truth about the current water management operating under the Plan.

In parallel with this complete mess and shameful (even negligent) water management, we have the in-waiting Minister for Water (et al.), Barnaby Joyce, who is temporarily unshackled from his former employment and free to do some heavy-duty campaigning for his seat. Snippets on the news catch him boasting about his own wonderful achievements (and what he could do more of) – all with the smug and confident certainty that he will return to be the Minister in charge of Australia’s water (and agriculture) again.

Are you kidding me?

For some time now, I’ve felt a sadness and defeat about the state of the environment; I fear for the future, going by the pattern of the present; and I’m angered by what I see is being done to our country (and the whole planet, for that matter). The careless treatment of our precious water is only part of the overall decline, and all this – on our watch – is ultimately facilitated and enabled by our elected governments and its politicians.

I can’t properly express the way I feel at the moment, so to help convey my mood, I’ll leave you with a couple of quotes instead (they’ll do!):

“Cry, the beloved country, for the unborn child that’s the inheritor of our fear. Let him not love the earth too deeply. Let him not laugh too gladly when the water runs through his fingers, nor stand too silent when the setting sun makes red the veld with fire. Let him not be too moved when the birds of his land are singing. Nor give too much of his heart to a mountain or a valley. For fear will rob him if he gives too much.”

(Both quotes from ‘Cry, the Beloved Country’ by Alan Paton).

• Is the King Island Scrubtit Tasmania’s canary in the coal mine?

• Ted Mead in Comments: This is a heart-breaking reminder of what is inherently wrong with this country, if not the world. Unquestionably, water is our most valuable resource, yet we have passively stood by and let the influential manipulate this resource to the benefit of the minority whilst the majority, and the environment, suffers. We are so out of touch with reality these days that only a broad-scale environmental catastrophe will ensure a different view, though by then it will be too late. A comprehensive ecological collapse is inevitable! The American Navajo have a word for this dire scenario – ‘Koyaanisqatsi’

• Ivo Edwards in Comments: Good morning Geoffrey (#6) – it looks like it is not just Tasmania where corruption is rife and the little people are trampled underfoot. Thank you Lyndall, for describing the shameful situation regarding water rights in the Murray-Darling river systems. As far as our own personal problem with the Derwent Valley Council is concerned, we have heard absolutely nothing from them since they issued the pending eviction order early in September. They long ago stopped replying to my emails, have not even acknowledged receiving our appeal against the pending eviction order, and have given no indication if they now acknowledge our legal residence status or not …