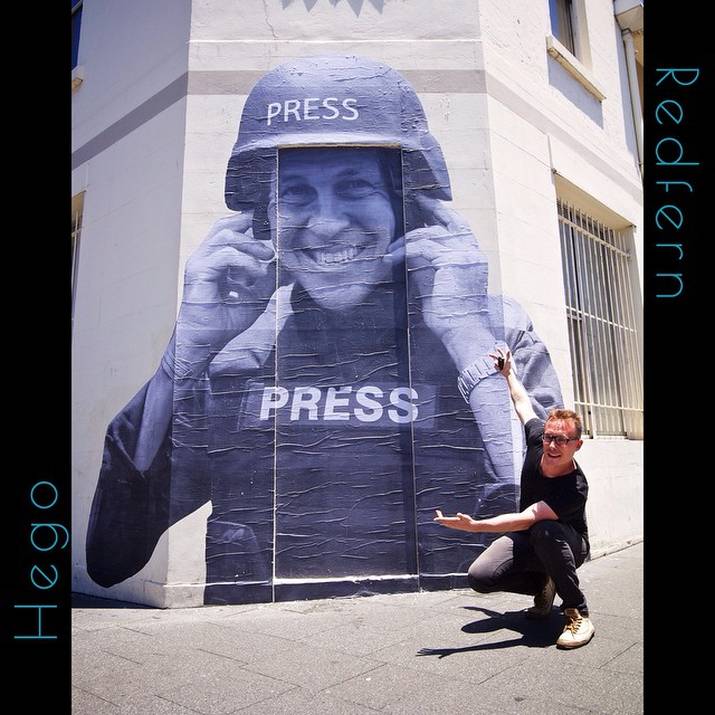 *Pic: Flickr, JAM Project. Hego last week (2014) with his just-completed pasteup tribute to the Australian journalist Peter Greste, made to commemorate the 1st anniversary of his and fellow Al Jazeera journalists’ jailing in Egypt on trumped-up political charges.

This is an extract from the chapter ‘The Fearful Country’ in ‘The First Casualty’ by Peter Greste, published by Viking, an imprint of Penguin Random House. © Peter Greste

In September 2015, Andrew Wilkie, the independent federal member for Denison in Tasmania, made a speech in parliament opposing a tranche of new national security laws, in which he said Australia was becoming a ‘pre-police state’.

Wilkie understands better than most the tension between the culture of secrecy within the security services and the public’s right to know in an open democracy. He began his professional life as a career soldier, rising to the rank of lieutenant colonel. In 1999, he was seconded to the Office of National Assessments (ONA) as an intelligence analyst. He left the following year to join the American defence company Raytheon, but in the heightened security environment after 9/11 returned to his old job at the ONA, where he worked on intelligence relating to Iraq’s alleged weapons of mass destruction.

Wilkie’s story would be unremarkable if he didn’t have a conscience.

The ONA has a broad mandate to provide assessments of international political, strategic and economic developments to the prime minister and the National Security Committee of Cabinet, but is also tightly integrated into the intelligence community, in particular coordinating and evaluating Australia’s foreign intelligence. Nobody works there without top-secret classification.

As the United States and its allies continued to accuse Iraq of secretly developing and stockpiling WMDs in violation of UN sanctions, the security services scrambled to find the stockpiles. On 13 March 2003, Prime Minister John Howard went to the National Press Club in Canberra to explain why the country was about to join the US-led war, suggesting that Iraq was on the verge of supplying Al Qaeda with WMDs.

But Wilkie could not square the information he had been studying in his ONA office with what the government was telling the Australian public. He quit and went to the media.

‘Iraq does not pose a security threat to any other country at this point in time,’ he told ABC Radio soon after. ‘Its military is very weak – it’s a fraction of the size of the military at the time of the invasion of Kuwait. Its weapons of mass destruction program is very disjointed and contained by the regime that’s been in place since the Gulf War. And there is no hard intelligence linking the Iraqi regime to Al Qaeda in any substantial or worrisome way.’1

(The interviewer, Catherine McGrath, went on to ask Wilkie how he thought things would play out if Australia did indeed join the coalition in a war against Iraq. With what now seems like remarkable foresight, Wilkie replied, ‘A war at this time is just not worth the risk.

‘I think there is too great a risk of a military or humanitarian disaster, and I think there’s a real risk that a war now will further inflame popular anti-Western opinion in the Middle East and push Saddam [Hussein] closer towards Al Qaeda, and push us all just that little bit closer to the so-called clash of civilisations that we’ve so far managed to stay well clear of.’

What Wilkie did was illegal on a number of levels. As an intelligence officer, he broke his professional code of secrecy, and as a civil servant, he violated Section 70 of the Crimes Act, which prohibits disclosure of any ‘fact or document which came to his or her knowledge, or into his or her possession, by virtue of having been a Commonwealth officer’. (The Crimes Act is not specifically aimed at intelligence agents; it was originally drafted in 1914 to stop any government leaks as the country moved towards the First World War.)

The penalty for revealing information under the Crimes Act is two years in prison. Tellingly, the journalists who first interviewed Wilkie – starting with veteran Channel 9 political correspondent Laurie Oakes, who broke the story – were risking seven years in prison for publishing the information. In the end, nobody was prosecuted over the leak. Wilkie believes he had a degree of protection because his case had such a high profile.2

He freely admits that he broke his own professional code of conduct, but he told me he felt he had no choice but to go public when, in his view, his primary responsibility was to the country rather than either his immediate bosses or his political leaders.

He was a public servant, after all – and he considered his ultimate loyalty to be to the Australian people rather than the government.

‘The trouble was that I could not address my concerns internally. There was no formal mechanism for it, and even if there was, I still would have been regarded as unreliable and lost my security clearance.I would have been sacked on the spot,’ he said.

Justice Stone snorted a little when I raised Wilkie’s case with her.

‘Why didn’t he come to our office? He could easily have done that. We would have investigated the matter and made a report, and the government would have had to answer it.’

When I went back to Wilkie with this, his retort was blunt.

‘That’s a bullshit response,’ he said. ‘She knows that IGIS is irrelevant in this matter because [her office’s] remit is the activities of the intelligence agencies, while my complaint was with the conduct of the government. See what I’m still up against? Despite all that we now know about the invasion of Iraq, the [Australian Intelligence Community] still defaults to shooting the messenger.’3

To Wilkie, (Bret) Walker ( Wikipedia HERE ) and (George) Williams ( Wikipedia HERE ), there is a vital need to protect the media’s oversight role, and in particular its function as a whistle-of last-resort for public servants who are genuinely acting in the interests of the public and feel that they have nowhere else to go.

Even though what he did was technically illegal, it is hard to argue that the country would have been better off without Wilkie’s leak. It certainly didn’t divert the government from joining the war in Iraq, but it did raise important questions about how the government handles classified intelligence briefings, and about the way it communicates with the public. In other words, there was a powerful argument that Wilkie’s actions were defensible in the public interest. At the same time, they do not appear to have done any serious or lasting damage to the way the ONA or any other intelligence agency operates. The same applies to the actions of Allan Kessing and Dr Peter Young.

None of those whistleblowers actually went to prison, so doesn’t that show that the system works? Walker says the answer is emphatically no. Relying on prosecutors or judges to use their own judgement about when to apply the law, he says, runs against one of the most fundamental principles of our judicial system: ‘My view is that’s contrary to the rule of law. We should not be dependent on prosecutorial or judicial discretion to temper the operation of a law that is more crude than is necessary.’

In other words, the law needs to make it explicitly clear that whistleblowers and journalists acting in the public interest to expose wrongdoing must be protected. Walker goes a step further, arguing that in creating a culture of secrecy in government, we’ve lost the most basic principles of public accountability.

This is not to suggest that the system has been deliberately skewed to protect guilty politicians and government figures, but we do appear to be creating a system with so much secrecy built into it that it allows scope for political abuse away from public scrutiny.

Walker believes that we ought to be thinking about the health of the nation in the same way we think about the safety of air passengers. ‘Air safety has led the aviation industry to be way ahead of any other sector I know in encouraging people to dob on each other in the nicest possible way, and even to dob on themselves without thinking “I’m about to be sacked”,’ he said. ‘They have a whole regime of protected disclosure about anything that undermines safety that is solidly policed, and even encouraged. It ought not be a spectacular way of dying that brings us to that realisation.’4

2 He was still prepared to go to prison. Wilkie said he even gave a friend a keyto his house in case he was ever arrested.

• John Biggs in Comments: … To turn wrongful incarceration into such a meaningful experience Peter conveys to us is really inspirational. Just so much to digest in this conversation. Peter should be made a national hero, as should Andrew Wilkie who Peter so generously acknowledges.