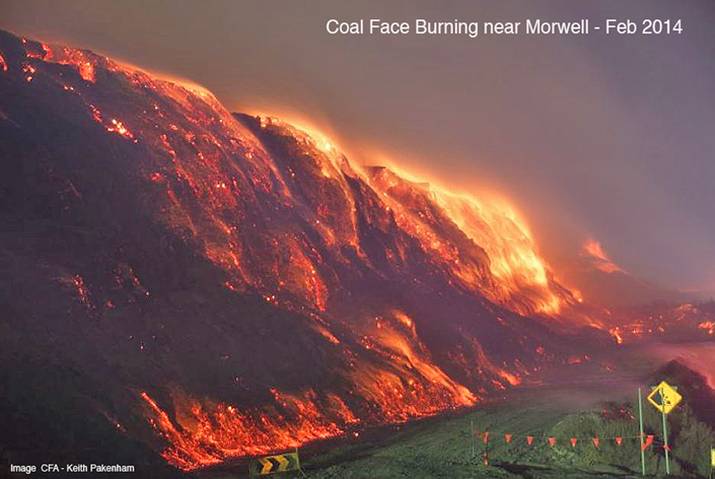 *Pic: Flashback to the Heazlewood mine fire in 2014 which devastated Morwell. More HERE

“Mr Coal” Josh Frydenberg, calculates that $3 billion in subsidies to renewable energy amounts to a subsidy of $66 billion up to 2030. He claims he is removing subsidies to make ‘Renewables’ operate on a level playing field.

Unfortunately for Josh Frydenberg the International Monetary Fund (IMF) has calculated Australia’s subsidies to the fossil fuel industry is $41 Billion per year amounting to $533 billion by 2030.

Corporations have – because of the growing treasure accumulating and the political power they have gained, plus annually some $6 trillion of subsidies paid by world governments to keep the provision of a unit of fossil fuel energy – at an apparent but illusionary moderate price to the consumer.

Minister Frydenberg, claims “Coal is reliable and affordable,” that is only if you don’t count the $41 billion per year subsidies Australian taxpayers ‘give’ to Fossil fuel corporations on top of their power bills. That amounts to $1712 for every man, woman and child in Australia, according to the IMF.

Air pollution caused by burning Coal contains 92 toxic chemicals and micro particles that penetrate straight into the blood stream through the walls of your lungs.

In addition, toxic metals and POPs have severe impacts on ecosystems. This is mainly because of their environmental toxicity and, in some cases, their tendency to bioaccumulate, a process whereby the toxin cannot be digested and excreted by an animal and, therefore, slowly accumulates in the animal’s system, causing chronic health problems.

Biomagnification within the food chain also occurs, thereby increasing concentrations of a pollutant in the tissues of organisms at successively higher levels in the food chain.

This is how, coal-created air pollution kills 11 million people worldwide each year.

What dollar value would you put on that if one of those dead was someone you love?

Shelagh Whitley, a subsidies expert at the Overseas Development Institute, said: “The IMF report is yet another reminder that governments around the world are propping up a century-old energy model. Compounding the issue, our research shows that many of the energy subsidies highlighted by the IMF go toward finding new reserves of oil, gas and coal, which we know must be left in the ground if we are to avoid catastrophic, irreversible climate change.”

This is real money which could be put into schools or hospitals. It is simply not economic to invest like this. This is the insanity of the situation.

They are diverting investment from economic low-carbon alternatives such as solar, wind, wave or tidal power and hydro-power and they are undermining the prospects for an ambitious UN climate deal.To create a level playing field all fossil-fuel subsidies must go.

Further, a person in high office using the power of that office, to create a benefit for one sector and a deficit for another, is committing a wrong or tort, known as Misfeasance. A very serious matter, because only Minister or Prime Ministers and public official at the highest level can be charged with this crime.

Prime Minister Turnbull and Minister Frydenberg committed misfeasance at the press conference on national TV in Canberra on Tuesday the 8 of September, being recklessly indifferent as to whether they were exceeding or abusing their public power or position thereby risking harm; they both did this by declaring renewable subsidies to be soon abolished (they have been trying to do this since 2013) to create a level playing field – but leaving subsidies for coal-fired power 10 times larger unchanged.

The level of misfeasance and political corruption, in the Federal and State Governments will someday soon be addressed by the courts as a matter of urgency.

The High Court and Federal Courts, are the only judicial bodies with the constitutional authority to address executive levels of wrongdoing.

All donations to the LNP by coal and oil industry players must be traceable back to subsidies received out of taxpayers’ funds.

After 16 years of the Iraq war, we find it has cost $6 trillion. Now we know the level of corruption, “Political donations” and backhanders between the fossil-fuel industry and political leaders has reached $6 trillion every year, all around the world.

It’s time, for a fresh election.

*John Ward retired CEO of ‘Workplace Transformations,’ a Registered Training Organisation. Focussed on Management Training and Development, Systems Thinking and Total Quality Management. The key to that success is in enhancing ‘what the people in an enterprise carry around in their heads and their ability to work together’, on having constancy of purpose and a transforming change, which is ‘led from the top, but built from the ground up’ with the involvement of all people investing their knowledge and skills. A workplace team’s ability to respond immediately, to eliminate barriers to productivity and introduce relevant change is vital to its success. The process is more comprehensive than traditional methods which centralise control and limits the inclusion of the people doing the job. My history in industry is with major construction non-residential sectors, Brown Coal Mining and Latrobe Valley Power Stations focused on training and development of management and all employees.

• John Biggs in Comments: It is blindingly obvious that the fossil fuel industry is receiving massive financial support from the government. It is good to see the figures here to substantiate the figures involved. Frydenburg (and Turnbull and all the rest of them) are either incompetent or blatant liars to talk of a level playing field. What astounds me is that they are allowed to get away with such criminal dishonesty …