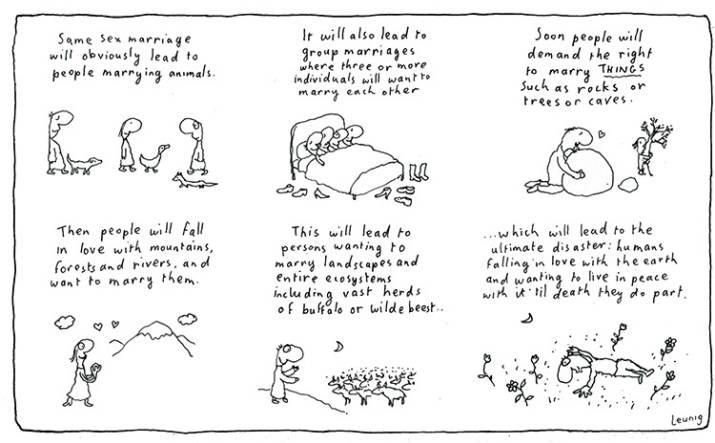 The same sex marriage debate is a test of our capacity as a community to deal with a controversial question in a thoughtful, respectful way. It’s hard work, but we can make a decision based on evidence, reason and clearly stated moral views, and, where we think they can help, the guidance of trusted authorities. How do the two sides suggest we proceed?

The Yes campaign ( http://www.equalitycampaign.org.au/marriage-equality ) says it is all about equality: ‘Each new generation of Australians does their bit to advance fairness and equality. Affirming all couples’ freedom to marry says that we are a country that believes in treating people equally — that we value love and commitment and believe every Australian has the right to happiness’.

This is a simple argument. All people have a right to be treated in the same way as others in the absence of a reason to treat them differently. There is no reason to treat same sex attracted people differently in relation to marriage. So they should be allowed to marry.

In opposition to this, the main organization arguing for the No case is the Coalition for Marriage ( https://www.coalitionformarriage.com.au/ ), led by the Australian Christian Lobby’s director Lyle Shelton, and including the Anglican Diocese of Sydney along with the Catholic Archdioceses of Hobart and Sydney plus another twenty odd mainly avowedly Christian organizations. The Coalition for Marriage do not reject the idea that all people should be treated equally unless there is some reason not to do so. That puts the No case in a difficult position as it places the burden of proof on their side: rather than the Yes case having to prove why same sex couples should be allowed to marry, the No case has to show why they should be treated differently.

Given their membership, we might expect the No campaign to offer a reason for gays and lesbians to be treated differently based on religion. It is curious, therefore, that the Coalition for Marriage training manual for doorknockers ( https://d3n8a8pro7vhmx.cloudfront.net/coalitionformarriage/pages/361/attachments/original/1505535929/C4M_Field_-_NVC_Training_Script.pdf?1505535929 ) says plainly that ‘This is a political not a religious exercise,’ and no quotations from the Bible or other religious texts are offered as a foundation for their opposition to same sex marriage.

The same is true of the three reasons the Australian Christian lobby offers ( http://www.acl.org.au/3_reasons_to_vote_no ) to vote No, which are concerns with sex education in schools and parents’ rights to prevent their children being taught things they do not agree with; freedom of speech and religion; and the claim that every child deserves a mum and a dad. I cannot find a logical argument showing how we will have less rights in relation to children’s education, freedom of speech or religion if we allow same sex couples to marry, than we do now. Rather, the No case appears to assume that as parents, citizens or religious practitioners, we would have rights taken away from us if we were obliged to treat homosexuality equally with heterosexuality. So this argument against same sex marriage relies, in the end, on assuming that homosexuals should not have to be treated equally with heterosexuals as a reason why same sex couples should not have the same rights as heterosexual couples.

Thus the ‘rights case’ against marriage equality boils down, as the great philosopher David Hume said on another occasion, to going in a circle and taking for granted the very point which is in question.

What about the claim that every child deserves a mum and a dad? Putting aside objections that this has nothing to do with marriage since same sex couples can already have children under existing laws, just like other de-facto couples, here is the Australian Christian Lobby’s headline statement on parenting: “Despite being certified by almost all major social science scholarly associations – indeed, in part because of this – the alleged scientific consensus that having two parents of the same sex is innocuous for child well-being is almost wholly without basis”.

If you found that hard to follow here is a translation: the reason we know there is evidence that children are harmed by having same sex parents is that almost all the relevant major scientific bodies say there is no such evidence. And the authority which made this bizarre claim? The impressively titled American College of Paediatricians, which a quick Google will show to be a small group that broke away from the actually impressive American Academy of Paediatrics when that premier scientific society released a statement that same sex parents posed no risk to children.

Here is the Academy’s statement on same sex marriage: “Children thrive in families that are stable and that provide permanent security, and the way we do that is through marriage … The AAP believes there should be equal opportunity for every couple to access the economic stability and federal supports provided to married couples to raise children.”

But surely the No case cannot rest on the logical fallacy of circular argument and fringe views on parenting?

There must be a moral basis for their claim – implicit if not explicit – that gays and lesbians do not have the right to be treated equally with heterosexuals in relation to marriage. Indeed, it is a logical necessity that there be a moral basis to the argument. To argue that marriage just is and always has been between a man and a woman, therefore same sex couples should not be allowed to marry is to commit the logical fallacy of attempting to derive ought from is – an argument which Hume also showed to be invalid. No set of purely factual statements, even if true, can ever justify a moral statement.

So where is the moral basis of the case against same sex marriage?

Given the dominance of Christian churches in the No campaign – although noting that the one Anglican and two Catholic Archdioceses are alone nationwide in their membership of the Coalition for Marriage – let’s see if we can find it in the Bible.

If we are looking for Jesus’ guidance we are directed to the Gospel according to Mark, where Jesus was asked whether it is lawful for a man to divorce his wife, as Moses had allowed. According to Mark, Jesus responds by echoing the statement in Genesis that God made humans male and female, and for this reason a man will leave his mother and father and unite with his wife and the two will become one. But Jesus then adds that husband and wife having become one, no human must separate them. So, Jesus continues, a man who divorces his wife and marries another woman commits adultery, as does a wife who divorces her husband and then remarries.

This cannot be read as providing a biblical foundation for marriage being between one man and one woman unless it is also read as an absolute prohibition of divorce. It is not surprising, therefore, that the No campaign does not rely upon it.

And that is not the end of Jesus’ surprises for us in his Q&A with all comers, for he goes on to respond to a wealthy young man who asks what he must do to be assured of a place in heaven. Jesus tells him to sell all his possessions and give the money to the poor, because it is easier for a camel to pass through the eye of a needle than for a rich man to enter heaven.

As a society we have found these teachings of Jesus on divorce and wealth just too hard to follow. Thus Christians do not take themselves to be obliged to live a life of poverty, even while acknowledging a responsibility to do what they can to help those in need. And most churches now accept divorce, in the interests of freeing wives and husbands from loveless marriages and permitting them to seek fulfilment in marriage anew. Our flexibility in interpreting these passages from the Bible reflects the kind of society we live in.

Divorced parents who have been economically dependent on their spouses are not left destitute without support for themselves or their children but, like people in poverty, can rely on our collective generosity expressed through our taxpayer funded social welfare system. The modern rich man might thus approach the Pearly Gates with some hope, provided they’ve packed their old tax records for the journey; and the divorcee who reached a fair property settlement with their erstwhile spouse and kept up their child-support payments need not fear eternal damnation for cutting their dependents adrift on a perilous sea.

We could, with no less violence to Jesus’ teachings, say that even if it were true that in the beginning God made people as man and woman who would naturally be attracted to each other and marry, that’s not how he’s making us now. Plainly, we come in a wide variety of kinds. Sorting us into just two boxes labelled heteronormal man and heteronormal woman leaves many with no place to belong.

The big question in the marriage equality debate is why we should continue the idea that society must strictly sort us into one of just two kinds when biology – or whatever you take to be the explanation for our diversity – does not. To say that we should follow the Bible’s answer to this question to the letter, when we negotiate our way around its clear teachings on others, is surely unreasonable if not hypocritical. But what else could the No case offer to justify same sex couples having lesser rights than others?

This is an important debate. How we vote will have a real impact on the lives of others if not our own. Our vote should be based on our morality, facts, and reason, and if we think it relevant, the teachings of our religion. Head butting is out. But so is pulling the wool over our eyes with logical fallacy and fanciful claims lacking legal or scientific foundation.

On my assessment as a philosopher, whether you are a committed Christian or whatever, once you accept that all people should be treated equally in the absence of a valid reason for treating them differently, there is no rational or morally defensible case for voting No.

*Michael Rowan is Emeritus Professor, University of South Australia and Honorary Professor, University of Tasmania. Brief Personal Statement: “I am a philosopher with a particular interest in writing for a wide audience on matters of current social and political importance. My philosophical background is mainly in philosophy of science and reasoning in natural language. For much of my academic career I was wholly occupied with the work of creating a new university, retiring as Pro Vice Chancellor of the Division of Education, Arts and Social Sciences at the University of South Australia. As a senior university manager I took a particular interest in evidence based strategic planning and reporting, quality improvement, industrial relations, and helping academic and professional staff get on with their work. My current philosophical work is mainly in education, as co-founder (with Prof Eleanor Ramsay) of Education Ambassadors ( https://educationambassadors.org.au/ ), and on the relationship between science and politics in managing the transition from a fossil economy to a sustainable one. I write on this and related topics on my website PersuadeMe ( http://persuademe.com.au/ ).”