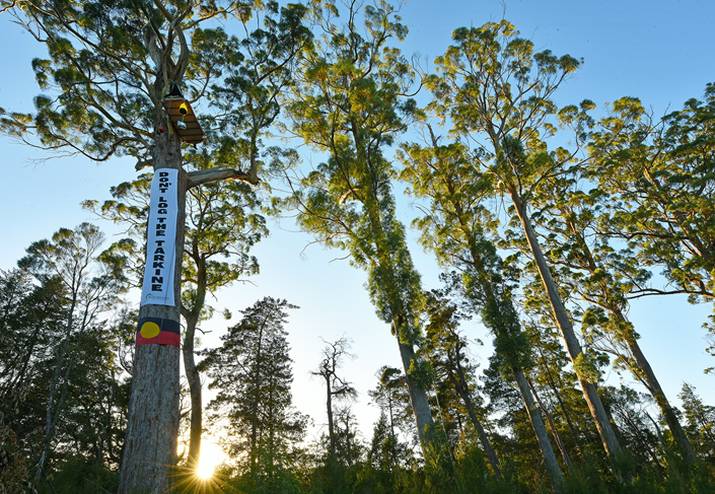 The vigil in the Frankland Forests is likely to wind up soon because as from July 1st it will be illegal for the Liberal government to log this area once the Wedge-tailed Eagle breeding season commences. Fortunately this may be the region’s saviour for now but one can never trust nor imagine what the wanton FT/Liberal vandals have planned.

Despite the fact that the proposed Frankland coupes possess marginal volumes of timber, FT’s harvesting plan has scheduled their demise. Without question the Liberals seem to want to plunder these forests regardless of the negative economical return to the state!

Just as Sustainable Timber Tasmania begins its limp step off the starting block, there would be no greater a reckless forestry statement by the government than to authorise logging into these Frankland coupes. Such an action would have legal ramifications for the state government and a dire impact upon the Tasmanian forest industries marketing image!

The Tasmanian Wedge-tailed Eagle is listed as an endangered species in the Tasmanian Threatened Species Protection Act 1995 and the Federal EPBC (The Environment Protection and Biodiversity Conservation) Act 1999. The Eagle’s breeding season is generally from August to January, though they can begin earlier.

To commence logging in the Frankland forests during the Eagle breeding season would send a bewildering message to the Forest Stewardship Council, and without question destroy any attempt by this government to ever obtain FSC for its native forest products.

The Frankland Forests are a High Conservation Area rich in biodiversity and should be protected for reasons beyond just its Eagle habitat.

The Liberals should be waving the white flag over this one, but history shows they just can’t help themselves when it comes to another conservation conflict.

One wonders if there is a state election announced soon, would the Liberal party punt on a political gamble by authorising STT to march forthwith into these forests?

Such reckless action may obtain more Liberal votes in Braddon, though the national condemnation is most likely to over-shadow that big time, and STT may fall into oblivion before it barely begins.

Anything is possible in these desperate Liberal Forestry times!

*Ted Mead has been campaigning for the protection of the Tarkine’s rainforest wilderness for over 30 years. Ted has visited the Frankland forests, and was disturbed by the extensive impacts of forestry around the Frankland River region where the low volume of timber extraction seems to be driven by woodchip-supply madness.