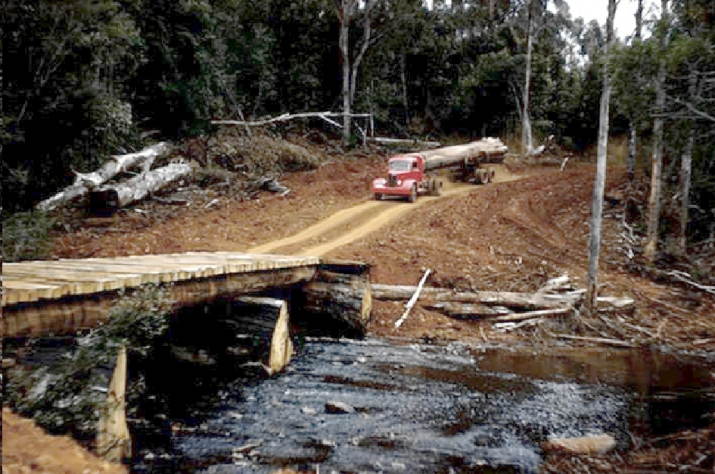 *Pic: The way we were … Picture (in selective logging days of the 1950s) of a log truck bearing an enormous trunk … (Max Wells, Arthur River)

A decade ago, I prepared a report (*download below) which estimated the dollar value of support for Tasmanian forestry from 1997 to 2007 to be more than 600 million dollars.

A major contributor to this sum was the low return to Forestry Tasmania arising from low stumpage rates.

Not much has changed over the following decade. The drain on the public purse has continued.

Hundreds of millions of dollars more have gone down the gurgler, whether promoting uneconomic Managed Investment Schemes, propping up Forestry Tasmania, paying contractors to exit and then re-enter the industry, subsiding freight for what are euphemistically called ‘residues’, or flogging the dead horse that was Gunns’ pulp mill.

Sectors of the industry which were uneconomic then, are not viable now. They survive because wood supply is provided at uneconomic prices.

One thing has changed, however. To its credit, the Board of Forestry Tasmania has finally come clean. Its recent letter to the Minister for Resources spells out that is losing money, big time, on its wood supply contracts. Stumpage rates are half those that apply in Victoria.

Rather than stop to ask whether ongoing subsidies are a good way to implement regional development policy, Minister Guy Barnett proposes to bring forward access to Production Forest Land. It is promoted as a way of ending subsidies while securing wood supply for regional sawmillers.

Stumpage will be determined by the government, not FT, and to quote Minister Barnett, “with references to the circumstances of the forest industry”.

The circumstances of the regional forest industry are fairly clear. Its continued survival, after decades of subsidies, depend on wood supply at very low prices.

Unlike the explicit payments propping up Forestry Tasmania, Mr Barnett’s approach has the political advantage that the implicit subsidy won’t appear in the budget papers. But it is a subsidy nonetheless.

As a means of regional development policy, or as an instrument promoting structural change, the lessons of the past are clear.

Support for inefficient industry has not worked. It is unlikely to work in the future. It only prolongs the agony.

As Einstein said, insanity is defined as ‘doing the same thing over and over again and expecting different results’.

A government with genuine interest in regional development would move on from supporting the old vested interests and investigate more forward-looking development policies.

The environment movement and many of the major industry players oppose Minister Barnett’s bill.

But is should be rejected on economic grounds alone.

It perpetuates the failed regional development policies of the past.

*Associate Professor Graeme Wells (UTAS) was formerly at the Tasmanian School of Business and Economics at UTAS.

• Gordon Bradbury in Comments: Might I recommend to Graeme Wells that he undertake a 10 year update of his 2007 report. I personally think it is vital that an ongoing record is kept and published of the monumental waste of public money by the forest industry in Tasmania. When the forest industry finally dies and history is written, these reports will be a significant chapter in human stupidity and corruption.

• John Lawrence in Comments: Please George (#5) seize this opportunity to enlighten us all about Graeme Wells’ lack of understanding about cost accounting and the reading of balance sheets. I fear I might be similarly afflicted. Go for it George. Don’t just snipe. That’s too easy. Explain it all to us dummies …

• Watch HERE: This documentary is now 8 years old and details an interesting time in forestry in Tasmania. Gunns Ltd and Forestry Tasmania were given the opportunity to have their views included in the film, but refused.