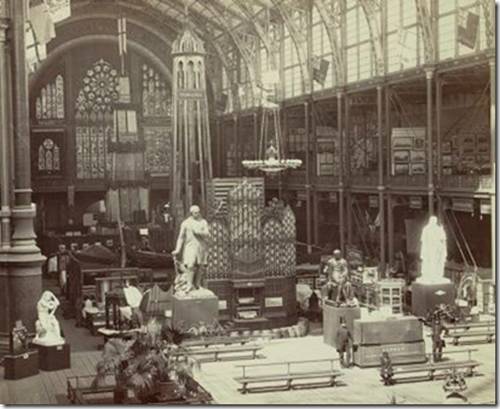 *Pic: The Tasmanian Timber Trophy at the London 1862 Exhibition

The Whiting pamphlet from which my descriptions have been extracted

One of the defining features of the 1862 London International Exhibition was the Tasmanian Timber Trophy designed by George Whiting to display Tasmanian native woods for ship building, railway sleepers and public buildings and as specimen cabinet woods for their beauty of colour and markings ideal for use in ornamental furniture.

According to the Daily News it was a noble structure and a cause for rejoicing.

In the opinion of John Bull it signalled the might of Tasmanian woods, their scale and their durability, but beyond that it spoke of Tasmania as a land of natural resources and human opportunity.

The Tasmanian Court displayed wool, minerals, agricultural produce and the products of the whaling industry, yet it was dominated by Whiting’s Timber Trophy rising over 100 feet above ground and made from a variety of native Tasmanian woods.

The main section of the trophy consisted of:

… octagonal column formed of eight spars of Blue Gum, Stringy Bark, White Gum, Silver Wattle, Blackwood and Sassafras. It was hollow and could be entered by doorway above a short flight of steps. From there the visitor could climb the interior spiral staircase made from Huon Pine (a free-working and nearly imperishable wood) to enjoy a bird’s eye view of the Exhibition.

The trophy also incorporated a number of specialised woods required for ship building, such as large ships’ knees. This section of the tree where the trunk meets the root had been in such short supply that British naval architecture had to be modified. Tasmania claims an unlimited supply of such wood.

A longitudinal section of the Swamp gum plank from Port Arthur, exhibited by Mr Boyd, will reveal the extraordinary length and size of Tasmanian timbers. The plank from which this section was taken was 230 feet long, and no available ship could take it to London whole. The section has been divided into 20 foot lengths.

After the Exhibition the trophy was taken to Kew and in 1876 the trophy was broken up and the wood distributed within the botany collection as separate specimens.

Tasmanian Timbers had moved from being an “icon to a datum.”

Today I wonder how many 100 foot slabs of timber could be cut for exhibition purposes?

Forestry Tasmania, can you supply me with a 230 foot single-slab of cut and dressed timber?

I ask Halton, Woodworker, MJF, Jack Lumber and those at Forestry Tasmania:

Where has this unlimited supply gone?