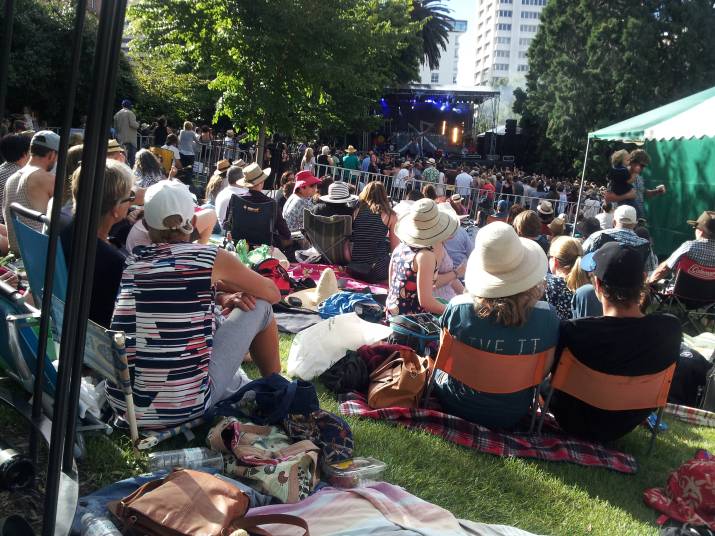 *Pic: Xavier Rudd in the park …

There could be no more a compelling argument to Change The Date than yesterday’s (Thur) concert in St David’s Park, Hobart.

Welcome to Country preceded Xavier Rudd’s quite wonderful performance. And, although Rudd was at pains (“Invasion Day, Australia Day, whatever you are celebrating …”) to neutralise the issue … it was far more overt.

Rudd, who is of Aboriginal heritage, preceded his performance with Welcome to Country, and Aboriginal dancers were a part of his performance; a highlight his use of an electronic didg which produced other-worldly, wondrous sound.

And, there were Aboriginal flags adorning the stage.

I was there courtesy of Jonesy as a freebie. Sometimes you get lucky. This was it …

It was a wondrous afternoon/early evening – from intro acts,Tassie boy Jed Appleton to Ocean Alley, capped by a compelling, incredibly tight and professional (what else would you expect?) performance from The Cat Empire which had the crammed Mosh Pit leaping …

Damn good stuff. But I took away from it a compelling reason to Change The Date. Why do we and our ‘leadership’ ( Australia Day 2017: protesters descend on Parliament House as PM rejects call to change date ) persist stubbornly in sticking with January 26?

It is massively offensive to Aboriginals:

Australia Day is not a celebration for every Australian. It marks the day Aboriginal people first saw the tall ships enter their waters. Many people in the Indigenous community call it ‘Survival Day’; others call it ‘Invasion Day.’

“26 January is a hard day for all of our mob. Aboriginal people always feel sad on Australia Day; it marks the end of freedom for our people,” says Amnesty International’s Indigenous Rights Advisor and Palawa man Rodney Dillon.

Meanwhile, The Gov is onside: “I quite understand how Aboriginal people feel about it and think that it is Invasion Day rather than Australia Day. The Governor has very limited powers, but you can talk about things, advise, recommend and say what you think.” ABC, Australia Day: Tasmania’s Governor Kate Warner urges date change debate (includes a report on the Change The Date march and protest on Parliament House lawns).

*Lindsay Tuffin has been a journo since 1969, mainly in Tassie … apart from a few years around Oz and in Pomland where he edited ‘Buzz’ for five years, a magazine dealing with church and social issues [beaten in audit circulation only by Aero Modeller magazine (Specialist Interest category)]; and a brief stint as a Uni chaplain …