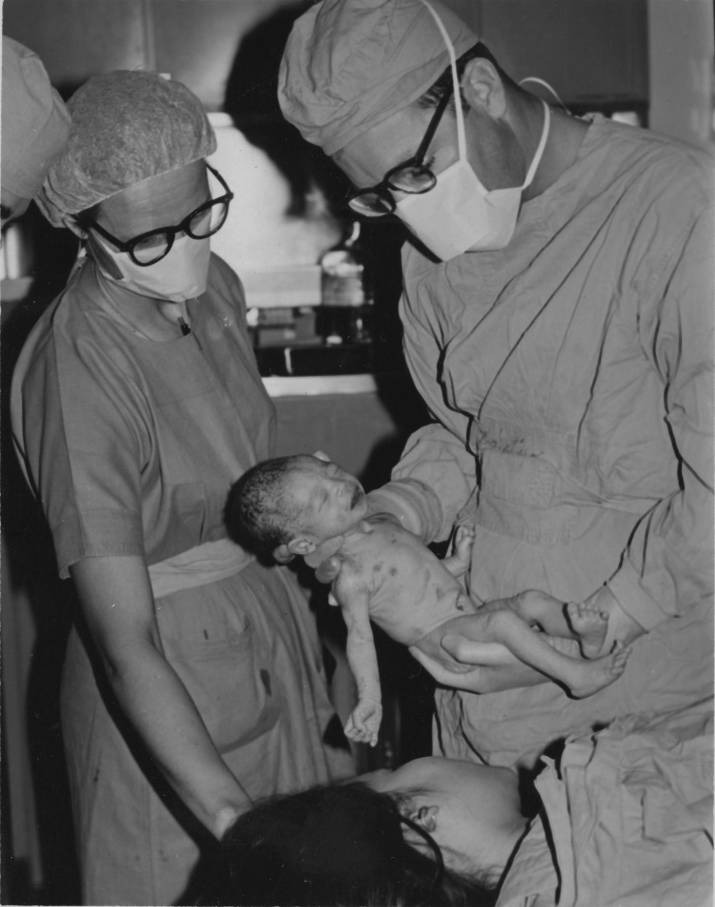 Long ago ‒ 150 years or more ‒ it was noticed that pregnant women whose children were delivered by doctors were much more likely to die of childbed fever than those tended by midwives.

The reason was that doctors treated more patients and often delivered babies straight after dissecting cadavers in anatomy sessions, without first washing their hands. The doctors, then, were above embarrassment: they simply refused to accept the findings.

And so the deaths, of thousands upon thousands of women, continued. One famous obstetrician said: “Doctors are gentlemen, and gentlemen’s hands are clean”.

Two of Henry VIII’s wives, Jane Seymour and Catherine Parr, died of it. So did his mother. So did Mrs Beeton, who wrote the cookbook. Lucrezia Borgia. Mary Shelley, the poet’s wife and author of Frankenstein. Robespierre’s mother. Julius Caesar’s daughter.

Many bacteria, such as streptococci, are potentially involved in puerperal fever. But many infections can be transmitted by unwashed hands. With the advent of hygiene in hospitals and later of antibiotics, few women now die of the disease. But this problem has been replaced by others far more intractable ‒ including golden staph.

Staphylococcus aureus is a ubiquitous organism that most of us carry on our skin without even knowing. If it stays there, it’s not likely to cause many problems beyond a pimple or a boil.

But if it enters the bloodstream, it can kill us. According to the evidence, between 20% and 35% of all people with S. aureus bloodstream infection die.

Tasmania has a problem with this disease. Our rate of hospital-associated S. aureus bacteraemia (SAB) in 2015-16 was the second-highest in the country at 0.89 cases for each 10,000 days of patient care, narrowly behind Western Australia. And it’s more of a problem in the north than in the south.

The rates at which doctors, nurses and other staff wash their hands depends on the culture of the hospital. At the Royal Hobart Hospital some determined infectious diseases physicians and nurses have instilled in that hospital such a culture.

According to national figures just released, the rate at the RHH is well below the average of its peer-group hospitals elsewhere in Australia.

At the Launceston General Hospital, though, the situation appears to be different. Its rates were well above the average, and have been for several years.

We need to get this into context. Throughout Tasmania there were only 35 confirmed cases of hospital-associated golden staph bacteraemia among of almost 120,000 inpatients. And surveillance of other hospital-acquired infections by state authorities show the situation is reversed between the two hospitals ‒ the LGH lower, the RHH higher. And, with low numbers, the figures can be volatile.

But we can ‒ and must ‒ do a lot better. One way would be to reduce overcrowding in our two main hospitals. But that would mean spending more money, something the present government is unwilling to do.

Hand-washing, particularly among doctors, could be a lot better. Doctors in the state’s public hospitals are fully compliant with hand-washing only 67% of the time. Student doctors are worse, with only 61% compliance. Nurses and midwives do a lot better, at 83%. On these figures, even clerical staff are more compliant than the doctors.

There is no need for panic, or for anyone to think our hospitals are unduly dangerous places. They aren’t. Hand-washing and infection rates have improved massively over the decades.

But we need to improve. Doctors, however hard-pressed they may be, need to take another look at hand hygiene. Their patients’ lives may depend on it.

Thirty-five cases of S. aureus bloodstream infection a year may not seem like much. But if the usual death rate of 20% to 35% applies, that means between five and eight people die unnecessary deaths every year caused by their hospital care.

And even that doesn’t count the number of people made sick by this disease, or who are made ill or who die from other preventable hospital infections.

*Martyn Goddard is a Hobart-based policy analyst specialising in health issues. He is a former journalist and ABC documentary maker who became involved in health policy during the AIDS crisis in Sydney. Since then he has been a member of the main Commonwealth advisory bodies on AIDS and hepatitis and was the first consumer member of the committee that lists drugs on the PBS. He was also health policy officer for the Australian Consumers’ Association. For the past decade he has concentrated on examining and explaining Tasmania’s health issues. His extensive articles on Tasmanian Times are HERE .