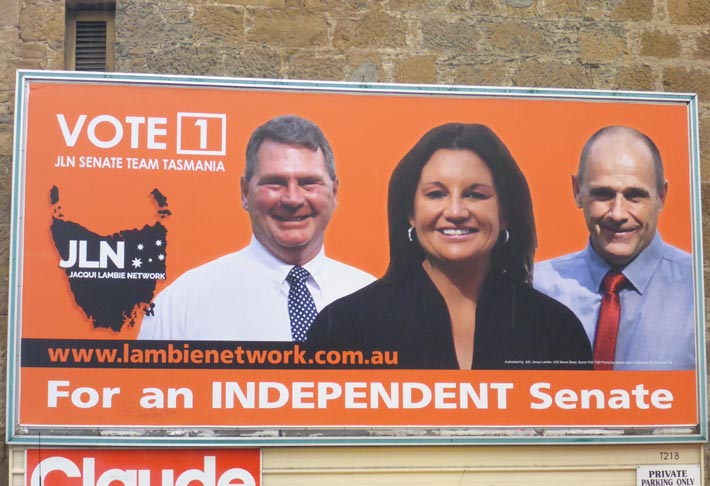 The fate of the lobbying push by Australia’s largest media companies for the abolition of two legal rules frustrating greater media concentration may hinge on the vote of Tasmanian Senator Jacqui Lambie.

Despite two Senate inquiries and protracted debate both inside and outside parliament over the last year, how Lambie will vote when the legislation comes before the Senate in early 2017 remains unclear.

Back in January the Sydney Morning Herald reported Lambie said “she wanted to ensure safeguards to protect local reporting jobs but that she would consult again with the minister on whether legislation would be necessary to do that.”

Eleven months later a spokesperson for Lambie told Tasmanian Times via email her position remained the same and she “is still consulting with Tasmanians.” Lambie’s office did not respond to a query on who she was consulting with or what about.

Behind the push for legislative changes are two overlapping corporate drivers: metropolitan free-to-air television networks wanting to merge with their regional counterparts and two major newspaper companies desperate to strike deals with national television networks. Both fear the decline in advertising revenue and audiences may accelerate, causing huge write-offs in the value of their existing businesses.

Central to the survival strategy of the newspaper industry is axing some or all of the five rules in the Broadcasting Services Act 1992 which are designed to limit greater media concentration.

So far the lobbying campaign by the major media companies has succeeded in persuading the Turnbull Government to try and axe the ‘reach rule’ and the ‘2 out of 3’ rule.

The ‘reach rule’ caps the national audience a television network can access to 75 per cent of the population. The ‘2 out of 3’ rule blocks a person or company from controlling more than two of commercial radio, commercial TV or newspapers within a commercial radio licence area, preventing the development of media monopolies in local markets.

In March this year the Minister for Communications in the Turnbull Government, Mitch Fifield, introduced legislation, titled the Broadcasting Legislation Amendment (Media Reform Bill) 2016, to abolish both the ‘two out of three’ rule and the ‘reach rule’. To mollify National Party members alarmed at the likely impact on regional newsrooms, there were some minor changes to set minimum local news content targets where national and regional television networks merged.

The government’s sales pitch for the changes was simple. The ‘two out of three’ rule, it argued , is “ill-suited to a contemporary media environment” where consumers can access diverse online news services.

The ‘regulation impact statement’ submitted to parliament by Fifield on the proposed changes stated:

“It is clear that free-to-air commercial television and radio broadcasters and print newspapers are under increasing and unprecedented commercial pressure. Their operating environment has changed substantially, and is likely to continue to do so over the coming 5 to 10 years. The current media control and ownership rules constrain the capacity of Australian media operators to optimally structure their businesses to deal with change underway in the industry, through increasing the scale of their operations and providing new opportunities for growth and diversification into new services.”

The repeal of the reach rule would allow the Seven, Nine and Ten capital city television networks to merge with the regional Prime, WIN and Southern Cross networks.

Of more significance to the newspaper companies would be the abolition of the ‘2 out of 3’ rule. If passed, the changes would allow a national television network to merge with Fairfax Media and News Corporation Australia so that a single company could own radio, television and newspapers in a city and – together with the removal of the reach rule – have a broadcast footprint across the entire country.

For the existing newspaper companies, media reports suggest the most likely mergers would be between Fairfax Media and the Nine Network on one hand and News Corporation Australia and Network Ten on the other.

The implications for Tasmania are less clear-cut as another rule, the ‘minimum voices’ rule, specifies that there must be at least four independent media operations present in regional commercial radio licence areas. Both Fairfax Media and News Corporation Australia want this rule axed as well but, at least at this stage, the Turnbull Government is not prepared to consider that.

However, in his submission to one of the Senate inquiries into the proposed bill Dr Derek Wilding from the University of Technology Sydney reviewed various possible results if both the reach rule and the ‘2 out of 3’ rule were axed.

In one scenario, Fairfax Media could be required to divest itself of both the Examiner and the Advocate. However, he noted selling these may be a “difficult prospect” as News Corporation Australia – with other licence interests in the licence area – would not be allowed to buy them. Whether any company would want to buy the papers is unknown.

Subsequent to his submission News Corporation has bought APN News & Media’s regional newspaper assets and changes to television network affiliations have occurred. However, neither of these changes, Wilding told Tasmanian Times would affect the potential need for Fairfax to divest the Examiner or the Advocate if Fairfax merged with Nine and Southern Cross Austereo’s television arm.

While the media companies are lobbying heavily for further deregulation, the public is very wary. A September 2016 Essential Media poll found sixty-one per cent of those surveyed do not support the repeal of the two-out-of-three rule.

With widespread concern about the potential impacts on media diversity, Fifield’s bill was referred to the Senate Environment and Communications Legislation Committee for review, public submissions and hearings.

While the committee handed down its report in early November – chaired by Tasmanian Liberal Senator David Bushby – the government majority backed abolishing the two rules, with a minor amendment. Both Labor and the Greens submitted dissenting reports conceding they would support the abolition of the ‘reach rule’ but insisting the ‘two out of three’ rule be retained.

While the government’s proposed changes went through the House of Representatives last week, they have yet to clear the Senate.

With Labor and the Greens opposing the end to the ‘2 out of 3’ rule, the government – which has only 30 of the 39 votes in the Senate needed to pass the media changes bill – requires support from 9 crossbench members to pass.

At the same time Senator Nick Xenophon signalled he was open to the abolition of both rules, though with the caveat that perhaps increased funding should be provided to the ABC to allow increased regional reporting. At the September election the Xenophon Team picked up an additional two Senate seats in South Australia, with Senator Stirling Griff – the group’s spokesperson on media legislation – suggesting they would support the government’s proposed changes.

With the support of Leyonhjelm and the likely support of the Xenophon Team and possibly the One Nation Party, Fifield would still be one vote short of the nine votes he needs to pass the bill.

This would leave the government needing the support from one of former broadcaster Derryn Hinch, Family First Senator Bob Day’s replacement or Jacquie Lambie. (The High Court is currently considering whether now ex-One Nation Senator David Culleton from Western Australia and Senator Bob Day in South Australia were eligible to stand for election. Even if the court rules they were ineligible, most analysts consider they would be replaced by other candidates from the same party. However, who the replacement Senator Bob Day may be is unclear and their position on Fifield’s bill unknown.)

A spokesperson for Senator Derryn Hinch did not respond to repeated requests for clarification on his position on the proposed changes.

However, if Hinch sides with Labor and the Greens when the bill comes to a vote in the Senate next year, Tasmanian Senator Jacqui Lambie may well have the deciding vote on whether Australia’s media becomes even more highly concentrated.

A spokesperson for Lambie told Tasmanian Times her position was the same as in January that she would seek to protect local reporting jobs “and is still consulting with Tasmanians.” However, her spokesperson did not respond to a request for clarification on whether she wants jobs protected but is supportive of repealing the 2 out of 3 rule. Nor did her office respond when asked who exactly she was consulting with.

Nor did her office respond to a request for comment on whether she had concerns about the major newspaper companies suggestion the 5/4 rule be abolished. It remains unclear what her views are on the possibility that if the 5/4 rule was abolished it would be possible for News Corporation Australia to buy both the Advocate and the Examiner and effectively be the monopoly publisher of Tasmania’s largest newspapers.

Tasmanian Times (TT) is free – always has been, always will be. If you like what TT does, please consider making a donation.

If you liked this article, please share it on social media.