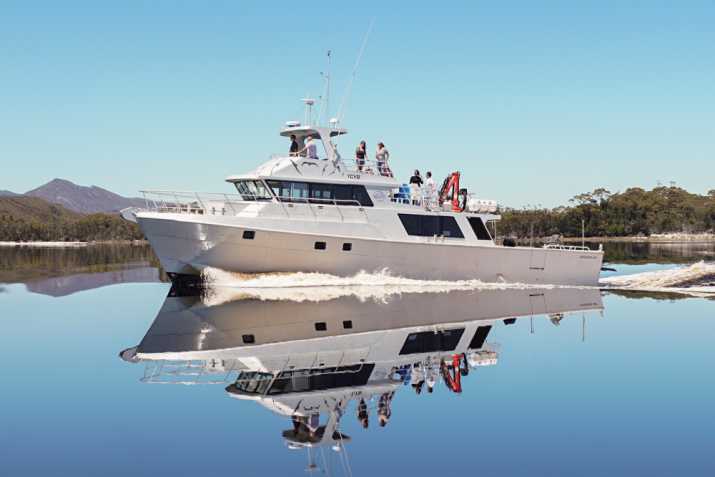 Amid fears about tourism development in Tasmania’s wilderness, Don Knowler takes a cruise on Bathurst Harbour in the remote and pristine south-west which leaves a gentle wake instead of a human footprint.

Dawn breaks over Bathurst Harbour as if it’s being sketched in charcoal by the hand of an artist. Distant mountains etched in fine strokes from a sharpened pencil, smudged here and there to portray mist. Hills between mountain and shore in darker shades and rainforest hugging the waters’ edge drawn vertically in a rougher, heavier hand.

It’s barely light as I lie in my bunk bed with a view over the stern of the luxury tourist vessel, the Odalisque, moored in a sheltered spot at Clayton’s Corner mid-way along a body of water three times the size of Sydney Harbour.

Too early for the black currawongs to utter their trumpet call, or the sooty oystercatchers to pipe in the new day, but as the birds finally start up Mother Nature mixes the colours of the morning on her palette. Buttongrass glows mossy now, peppermint gum along the shores are transformed into shades of green and tranquil waters first seen at dawn as uneven sheets of tinfoil reflect the dazzling blue of the sky.

I’m lying in my bunk bed aboard the Odalisque trying not to get emotional, even if the day before, as a bird-watching tragic, I had realised a life-long ambition to see an orange-bellied parrot in its natural habitat, nine kilometres to the south at Melaleuca. Emotion would be a bad look to present to the rugged skipper and owner of the Odalisque, Pieter van der Woude, and the equally rugged tour guide, Peter Marmion, to say nothing of my fellow passengers, a party of travel journalists.

I’m overwhelmed, though, by the beauty of it all. I feel a little foolish now that my interest in this pristine part of the world, a place where wilderness is spelt with a capital W, had been centred just on one species of bird. I’d never looked to the broader horizon, never known that the Port Davey Marine Reserve, which embraces Bathurst Harbour, is so vast, untrammelled and mountainous.

How do you describe it, portray it in all its glory and uniqueness? I look at the photographs I have taken and they are not enough. Only an artist can bring this area to life. To write my story about the Odalisque and the window it opens on this precious part of the world I look for art-world metaphors.

A voyage through the channels, inlets and bays of Bathurst Harbour is in fact like a visit to an art gallery, with each picture, in each room opening up a fresh image. It’s the Louvre, or the Tate, or even the Museum of Old and New Art (Mona) in Hobart, if the region’s natural beauty combined with human eccentricities are taken into account.

The legend of tin miner, naturalist and painter Deny King is here, along with tales of Win and Clyde Clayton eking out a living from a fishing boat moored close to their hand-built wooden home, which is now a museum.

And there’s the story of Critchley Parker, who in an effort to impress his Jewish lover trekked into the area shortly after World War II with a dream of establishing a Jewish homeland there, “a new Jerusalem”. When he vanished from view searchers found his body in his tent pitched among the buttongrass and sprengelia.

He had starved to death.

Although the Odalisque, operated by Tasmanian Boat Charters, is at the high-end of tourist travel with chefs on board borrowed from the best restaurants in Hobart – in our case Zac Matthews – to provide five-star cuisine, the ethos of Peter van der Woude is to provide a floating base for a genuine wilderness experience.

This is not wilderness in the abstract, viewed from a helicopter or a plane, or luxury hotel room. During this experience the wild can be heard, smelled and touched.

The Odalisque does not provide a cruise around Bathhurst Harbour as such. There is no set itinerary. Guests are free to choose what they want to do – whether viewing the pioneer cultural and historical sites around Melaleuca, Aboriginal walks to explore the history of the ancient Needwonnee people of the south-west through rock paintings and ochre mines, or taking the many hiking trails up hill and mountain – “getting your feet wet,’’ as Pieter van der Woude puts it.

Specific interests – perhaps botany or bird-watching – can be catered for by the hand-picked guides with years of experience in the area.

A trip on the Odalisque also provides an escape from an increasingly fast-paced world.

“This is a digital detox,” says van der Woude. “You can put your smart phone away – we are out of range anyway – and tell people you will be totally out of touch for a few days.”

The Tasmanian Liberal government is setting in motion plans to open up the Tasmanian Wilderness World Heritage Area to increased levels of tourism, and various proposals are under discussion. There are fears that some ideas might compromise the definition of wilderness. The Odalisque is never in danger of doing this. Guests, for instance, are ferried to shore in dinghies so not even jetties – I only saw one beyond the pontoon at Melaleuca – intrude.

The Odalisque also takes out what it brings in, and so its footprint is merely a gentle wake in still waters.

Although my orange-bellied parrot experience proved to be a personal highlight, I soon came to put it in a broader context of emotion. Within a few hours of seeing the critically-endangered parrot after arriving on a Par-Avion flight from Hobart, we were ferried by dinghy along the Melaleuca Inlet to board the Odalisque itself.

After lunch we were climbing the 276-metre Mt Beattie with its stunning view of Bathurst Harbour stretching south. It was one of several walks during the trip, including a hike to discover Critchley Parker’s resting place, his grave and marble plaque marked out by the quartzite of the surrounding mountains.

On the last night we moored close to where the harbour meets the Southern Ocean, screened by a range of islands appropriately named The Breakwaters.

Glasses of champagne in hand, we watched the sun set between two rocky islands to the west. Vistas during the day, bathed in soft sunshine, could have been painted by John Glover and now a stabbing orange light from the setting sun brought the wild hand of Brett Whiteley into play.

We toasted the sunset and lingered until a crescent moon and stars appeared. Another room in nature’s gallery opened, and the Southern Cross called to us as strongly as Vincent van Gogh’s Starry Night.

*Don Knowler, journalist travelled on the Odalisque as a guest of Tasmanian Boat Charters. Don writes the On The Wing column in Saturday Mercury …