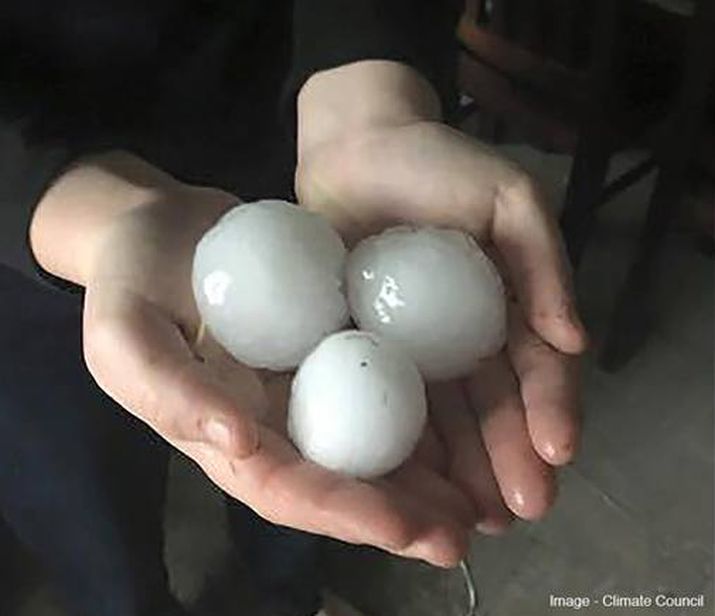 Hold on you missed the first one.

No, that was just before Christmas when the Bass Strait cable went down with an inadequate storage allowance in a drought exacerbated by climate instability.

Tasmania had an expensive lesson but apparently no other State noticed that a centralized energy distribution system dependent on long distance input has vulnerabilities.

The impacts of climate instability are much clearer to all following the damaging floods and extreme storms but a few crazed fossil fools. Even the greedy criminals in the unchanging fossil fuel industry acknowledge that the climate is changing [but they fail to take up an energy transition path].

Investment is moving from fossil fuels to renewables, but without some government co-ordination we are seeing the failure of the private sector that are happy to build windfarms for a return on their investment but not to restructure the whole network to ensure storage or harden infrastructure. Take the profit, socialize the cost.

The owner of Redflow, manufacturer of power storage batteries, lives in Adelaide but was in Brisbane when the storm event collapsed the transmission towers in SA. His children were at home but didn’t know the power was out for an hour because the batteries kicked in. A number of houses with storage batteries had power when their neighbours didn’t.

In 2005 the SA transmission business was advised that 43 power pylons needed maintenance or replacement. This work was scheduled in the 2013-2018 5 year plan.

Much of Australia’s electricity transmission infrastructure was installed in the 1970’s with an expectation of a 40 year life.

In Tasmania the process of replacing old infrastructure had been programmed and conducted over many years reducing the number of outages and ensuring security of supply.

For example, a 25% increase in peak wind gust speed causes a seven fold increase in building damage because the wind load grows with the drag on a structure, and the wires connecting it if a power pylon.

One approach is network islanding, but with an interconnected National Electricity Market a redesign of networks would be needed to avoid shutdowns when the system synchronicity is interrupted. This will require an investment in new infrastructure.

Another approach is to create micro-grids, where electricity is made and distributed locally, but again this requires investment but may suit more isolated areas on the end of the line.

The cause of delays in the right investment in renewables, in energy production and distribution in a Carbon constrained world of increasing climate instability, has been the playing of politics with energy to give an appearance of action on climate without the commitment to the full degree of change necessary.

No jurisdiction is free of responsibility. Each one either counts the cost of change whilst excluding the cost of more Carbon emissions or cosies up to its donors from the fossil fuel industry and the associated unions or both.

Local government should know about the costs of climate instability. Twice within a decade a one-in-hundreds-of-years’ flood carrying away infrastructure. Repairs have been slow this time due to the extent of the damage, the cost of repairs as well as the concern it ain’t over yet.

Recently Tasmania had a $100 million lesson by having to hire diesel generators which in the end proved unnecessary. Now it has had the cost of flood damage.

The Federals have mainly had embarrassment of the mouth

Deniers one and all.

Howard recanted on his 2007 election promise to act on Carbon emissions after losing to Labor, thus showing its true denier colours. The current leader was rolled by Abbott for having the temerity to think of greenwashing the Lieberals. The right wing of that Party was having none of that.

Then the Lieberals made it in to government on the back of what turned out to be a suite of lies and immediately “climate change is crap” Abbott put the foot in the mouth with his ‘nothing unusual’ comment about an October bushfire in 2013.

The facts spoke for themselves. The years between each October bushfire had lessened. Now it would be real fool who would try any sort of comment about anything out of season, outside it’s range or of a higher intensity.

Still one has to recognize consistency. Turnbull turned around, kept the Abbott/Labor changes that reduced investment reliability in renewables and then worked to ensure there were more reductions in incentives to build a renewable energy industry, to transform the Australian manufacturing sector and limit the effects of climate instability.

Sharp as acid, Turnbull has now raised the spectre of even more changes by criticizing every state with a renewable energy target except Tasmania and the ACT, both who could reach 100% renewable energy in very quick time, that being the goal of the ACT.

All the evidence points to the state targets being exactly what Australia needs to meet the promises the Turnbull made in Paris in 2015 about reducing greenhouse gases.

Turnbull’s own officials admitted in a Senate Inquiry this week that they had undertaken no modelling at all about how to meet the Paris target for reducing national emissions out to 2030, about to be ratified and become Australia’s binding obligation.

The government’s own Climate Change Authority concluded electricity generation needed to produce zero emissions “well before 2050”. To achieve that the State targets Turnbull criticised are the ones he will have to adopt nationally.

If not the costs of climate instability and a delayed transition to renewables will blow out, creating huge pressures on the economy and social cohesion whilst government and the people try to address the physical impacts of that instability.

There are bound to be more lessons

No doubt the rhetoric around action will change but the real measure of commitment to limiting climate instability is the actions taken.

There are two ways to measure action, the price on emissions [yes a ‘Çarbon tax’] and the level of government support to grow the benefits of the transition to renewables.

Background Briefing [ABC 02OCT16] on the impacts of climate instability on Agriculture with interviews with Tasmanian farmers shows that those experiencing it first-hand understand the future, it’s hard to see why their ‘natural’ party is so out of step.

The most likely initial outcome will, sadly, be more of the same until voters wake up to the wool being pulled over their eyes and vote for real action on reducing Carbon emissions.

Remember, the ice will not magically stop melting changing all coasts, harbours, ports, estuaries and islands for millennia, the atmosphere will fill with more energy and water increasing wind speeds and rainfall as well as changing their patterns, temperatures will continue to rise making for heat waves and longer fire seasons.

Everything we do is affected by the climate, consider carefully who should be entrusted with government now the old parties have let climate instability grow and tried their hardest to block, limit and divert the actions the Greens spent decades calling for.

phill Parsons has been a long time climate activist who has also watched the disasters predicted come to pass against steady and ongoing denial.