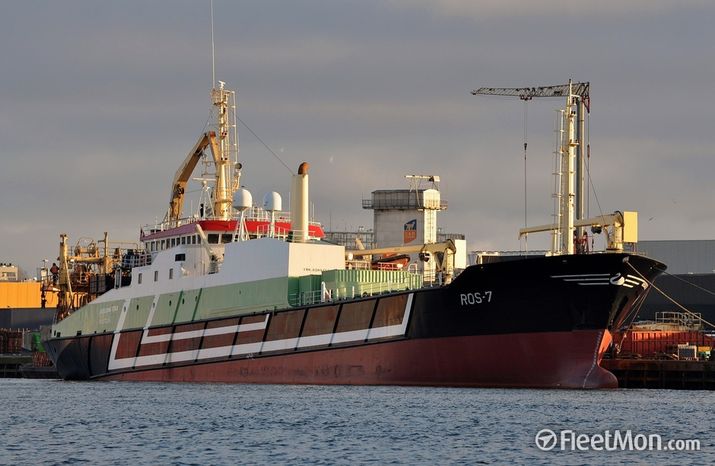 *Pics: The damage … and the culprit? Geelong Star, before its renaming. And below, Basslink cable damage, including the gouge …

From a recent item in the Mercury there seems to be an irrationality creeping into the State Government’s stance on what happened to Basslink. The effort to maintain secrecy is getting weird, becoming technically contradictory.

There seems to be a paranoia to ensure that an internal electrical problem remains at the top of the possible cause for Basslink failure.

The first statements when Basslink failed indicated there was no operational or electrical reasons why the cable should have failed. It simply jumps to possible internal failure in subsequent press releases.

However, the “paucity” of information from official sources has allowed electrical myths to build up.

There is, however, much circumstantial evidence indicating that mechanical trauma caused the failure. Described in the columns of Tasmania Times by myself in recent weeks: Likely cause of Basslink failure is the Geelong Star and Is a door flying open on Geelong Star.

The most damning evidence is from the two official photos released on damaged sections of the cable (above). One showing the point of electrical failure and one showing superficial damage as if scraped by a moving object.

The point of electrical failure showed a severed single wire of the cables armour with a right angle cut on one end and the other end bent into the black of the cavity. This is the classic indication of mechanical puncture of a cable made by a suitably shaped moving object.

Information from UK on the European heavy fishing industry indicates that Dutch Seine trawl nets carry weights spaced along the lower mouth and have a profile design capable of inflicting the type of damage shown in the two official photographs. Geelong Star is of Dutch fishing technology.

From reports on a large number of cable failures happening every week in the Northern Hemisphere we know that trawler related damage is responsible for practically all cable failures in depths similar to the depth the Basslink fault was found. For more read the original article in Tasmanian Times, Likely cause of Basslink failure is the Geelong Star .

The comments that followed the article brought into question of the legality liability of fishing and vessels striking Basslink. This differed from my own understanding on the regulations. It does appear that it is voluntary for a fishing vessel to report possible contact with Basslink.

Clarification was sought by email from Basslink, who, as of writing has not replied.

The State Government’s seeming insistence on “internal electrical failure” does seem to pose the question, why?

Could it be that as long as doubt is maintained on the the type of damage then no investigative action can be taken by the State or Federal Police?

The police need only reasonable grounds to investigate. I have no doubt they can then access the electronic data of the position of any ships likely to damage Basslink at that specific time.

If Australian law does not place any wrongdoing on ships which accidentally hit Basslink, then why not say so … end of story.

However, in the “comments” from my previous Basslink article, there was another question raised: Are trawlers allowed to fish in Bass Strait.

One of the main arguments I put forward in my original article was related to net modifications made prior to Geelong Star sailing.

These modifications were a compulsory requirement by the Federal government because of well publicised by-catch issues on previous sailings. This included a whale shark.

I understand from within the fishing industry that net modifications can necessitate rebalancing the net’s buoyancy components for correct operation. These tests can be somewhat trial and error in nature.

It is not beyond reason that such testing of nets could have been undertaken by the Geelong Star on the way to the NSW fishing grounds.

It is also not beyond reason that after the required in-port net modifications she took a course to NSW fishing grounds which would, if initial trials were unsatisfactory, allow a quick return to port for further on-shore adjustments.

Would opening the nets in Bass Strait with fish gates open (fish would pass straight through the net) constitute a legal infringement of the rule of no fishing in Bass Strait?

The Geelong Star carried Commonwealth fishing inspectors, therefore, surely they must have known what was happening. It must be remembered that if no offence was committed then Commonwealth Officers quite correctly, would by law, not be able to make comments whatsoever.

The original tests were carried out at the cable manufacturer and then in a UK Laboratory which I suspect was at the behest (understandably) of the ultimate owner of the cable, a British Power company.

As indicated earlier cable damage is so common in the Northern Hemisphere that many similar examples almost certainly already exist.

Having worked in specialist industrial laboratories, I find hard to think of any better facilities. What is meant by “forensic” examination implies that there are criminal implications. From my knowledge of these situations a forensic laboratory examining the cable would refer the the work to the type of establishments that have already examined the cable.

To me this sounds like a “forensic” information delaying strategy.

A very significant point my article raised and “commented” on was: How did the repair crew choose the South end of the cable to start fault finding from?

The cable protection systems have no way knowing where this type of fault was located along the entire cable length.

The fault finding system can only test given lengths of cable. Having a rough idea of the fault location is vital for timely fault location.

Starting at the South end they only had to make one cut at sea before the next length tested revealed the fault.

This raises the question did Basslink use electronic position data on ship movements?

If you extrapolated the likely net-testing course of the Geelong Star – as outlined above – she could have been more South than normal before heading to NSW and could have crossed the cable where the fault was found.

Labor Leader Bryan Green’s office was one of the first to “comment” on my first article. Saying that original report tabled to State Parliament had so much censorship that it had little information other than already released.

Nearly all questions can be derived or narrowed from detailed examination of shipping navigational data. This was a common “comment” from the original article.

I – like many Tasmanians – am not interested in State Government’s conflicting verbal iterations within Parliament. Secrecy has been so tight on this matter by the State Government one would think it was the latest stealth fighter development program … not a piece of infrastructure so vital to Tasmanian people and industry.

People just want to know what actually did cause Basslink to fail.

Something that for some inexplicable reason the State Government does not want to be fully revealed.

• Pete Godfrey in Comments: Kelvin the only reason for secrecy, (other than that it is normal here) is that they know full well what the fault was caused by. If they were to say outright that a ship damaged the cable the insurance company would say Not Paying. So they have to maintain secrecy until the payment comes through …