Letter to the Examiner (unpublished):

I was recently informed that the local member for Bass, Mr Andrew Nicolic lodged a complaint with my employer about criticism I had made of him in the Examiner.

I certainly will not be bullied into silence. In the democratic traditions of this country we conduct debate and discussion in the public arena avoiding the coercive methods of repressive regimes.

I believe it is important that matters of public concern are aired freely and openly without coercion or pressure on opinion.

Given these concerning circumstances I would invite Mr Nicolic to an open conversation with me on the issues with which he senses grievance.

A public dialogue on the vision of the present government for the country, the policies and tactics intended to achieve such ends and the economic and social consequences of those intentions are matters that deserve public discussion.

The invitation is for an honourable, civilized and open discussion appropriately moderated, not backroom politicking or petty abuse.

It takes courage to voice and defend opinion so I would expect Mr Nicolic to confirm a willingness to participate.

*Dr Michael Powell JP is a Lecturer in History

• Download letter to the Examiner which led to the Nikolic reaction …

I wrote to Nicolic and said rather than go behind my back why not debate me in public but he went silent. It seems he can tackle the Taliban but refuses to face an unarmed constituent. My gripe is that while it did not effect me, going to an employer and complaining is intended as intimidation and an attempt to silence criticism – it is reprehensible behaviour by a parliamentarian and needs to be hammered. 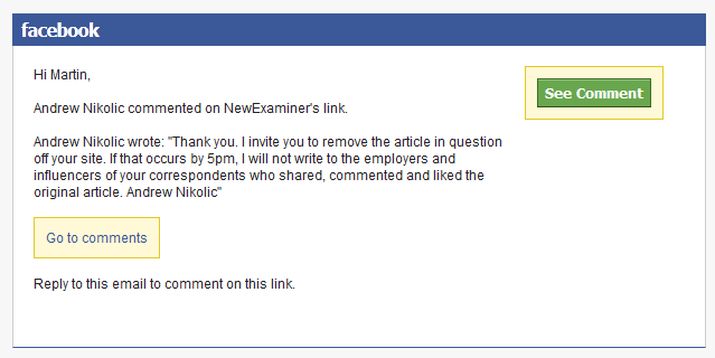 Scroll down below Helen Polley’s Senate speech for the relevance of the screen shot snapped 5 May 2012 (click on, Andrew Nikolic, The SMH … and the Press Council) …

• Andrew Nikolic’s Middle Eastern vision provides something for everyone

• Over to you, Mr Nikolic

• Mr Nikolic was unable to show the same understanding

• Andrew Nikolic, the SMH … and the Press Council

• Luigi Brown, in Comments: The Federal LNP government needs strong men at the moment. Dissenters and outspoken troublemakers need to be whipped into line – both inside and outside government. The electorate of Bass is lucky to have such strength. This week alone in Launceston we have had a domestic violence siege, a kidnapping and a book launch. And now things have degenerated into a letter to the editor by an academic! Mr Nikolic is the right man for these troublesome times.

• Pete Godfrey, in Comments: Unfortunately Mr Nikolic seems to be stuck in the mindset of the military. Duntroon is well known for training bullies. He seems to have forgotten that he is now in Civvy Street. He also seems to forget who his employers are, I am sure there will be a sharp reminder in a year or so when he asks his employers to extend his contract.

• Michael Powell, in Comments: I feel strongly about the principles of democracy and urge my students whatever their persuasion to stand up for those ideals. To speak. To debate. This is the most radical government this country has seen whose agenda is to rend the fabric of our nation and the values that have founded it (less some of the ones we would rather forget like White Australia). Mr Nikolic is glued with barnacle adhesion to Mr Abbott’s authoritarianism and has been rewarded as Whip with a role he is qualified to administer, that of official School Bully. Like all bullies he does not have the courage to dialogue with those with whom he does not agree. He wants to fight terrorism but is unable to muster the courage to debate a harmless, unarmed, civilian constituent. Man of the moment indeed!

• Bazzabee, in Comments: I’m not exactly shocked the Libs have quite a lot of form in this area. In early 90’s I got a job with a Commonwealth Dept in Hobart. I got the job fairly and it was a job I was well qualified for the process followed public service guidelines. So imagine my surprise when after a couple of months my boss called me in to her office and told me that Senator Jocelyn Newman (Campbell’s dear old mum) had written to the Minister saying I was not fit to hold a position of responsibility in the Public Service? It was also said that I had got the job because I was a well known ALP figure her letter alleged cronyism.

Michael Powell, in Comments: I am really shocked by #20 Bazzabee. The then Senator Newman was notorious and often said as Minister for Social Security that she was there to give a ‘hand up not a hand out’. When she left the Senate she took her own Ministerial pension AND her husband’s Ministerial pension (Kevin) AND his military pension. So much for a hand out – at that time >$200,000 a year. I would also point out Mr Nicolic also has a military pension along with his parliamentary salary fully indexed while approving the reduction in pension increments to CPI rather than AVE. In the 1980s Labor fought hard to bring pensions up to 25% of AVE (average weekly earnings) after years of Liberal neglect – now that standard has been trashed and in time will hurt pensioner’s purchasing power greatly.

• Michael Powell, in Comments: Stop Press: According to my sources in the corridors of power School Bully is mightily miffed. He has denied he ever intended to ‘intimidate’. He does not deny that he called my employer to complain – just that he did not intend to ‘intimidate’. Well why do you complain to an employer – to praise their courage or recommend a promotion??? I think not. He then tried to assert I was a Green candidate for Bass! This is after he has accused me of being a Labor candidate. What next Palmer United? What the deluded Andy cannot understand is that you don’t have to be a ‘candidate’ to speak out about the government’s polices and his grotesque behaviour. What these people do not understood is that there has been a groundswell of ordinary people who who have turned against policies and behaviour that are abhorrent. Simple as that.

• Dirk Flinthart, in Comments: I know Dr Powell. I’ve met Mr Nikolic on a few occasions (hey, it’s Tasmania. It’s hard not to meet people, you know?). Anyway, so much for disclosure. Folks, look at the written words. Nikolic has acted in an intimidating and offensive manner. As a public figure (an elected official) he has reacted to public criticism by moving privately to the employer of the critic. If that doesn’t make you nervous about Nickel-dick (jeez, where did that come from?) and the government that he flogs, what will it take? On one hand we have a person who has used proper public channels to raise an issue of public interest, and has suggested — without visible rancour or ad hominem nonsense — that the member for Bass needs to lift his game in representing his constituents. And on the other hand we have someone who will not engage in public debate, but attempts to move behind the scenes to censor genuine public debate. It’s a no-brainer. And the outcome? Pick somebody else to vote for next time. Andrew Nikolic, like so many other Abbott appointees, is an incompetent bully.