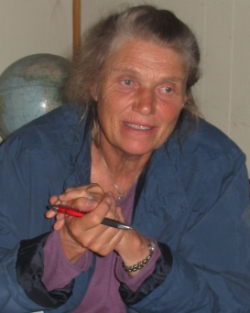 Members of the Legislative Council, Tasmania’s house of review, should not be directed or influenced by political parties in their decision-making. Therefore, I resigned from the Tasmanian Greens Party in March so that I could stand as an independent.

As an independent MLC, and a representative of the people of Huon Division, I would be making decisions in the best interests of Tasmania’s long-term environmental, social and economic sustainability, based on available evidence from parliamentary committees, briefings and community consultation.

I have a science degree (Aberdeen University) and a doctorate (ANU), and 30 years of research and teaching experience. I moved to Cygnet in 1999, and have been a Huon Valley councillor since 2002.

I completed a Graduate Diploma in Environmental Planning (UTas) in order to better understand Tasmania’s planning system, and have regularly attended workshops, lectures and briefings on many aspects of state legislation and issues of community concern, including domestic violence and environmental management.

I have broad experience in working with local community groups; I stay abreast of current affairs; and I am committed to lifelong learning. Legislative Council membership would provide me with an opportunity to contribute to a better future for Tasmania.

First and foremost, I have served two terms as an independent Legislative Councillor and I want to continue to be free of any party political obligations.

Independence is crucial for the Upper House if it is to review government bills, rather than rubber stamp them or automatically block them.

Whatever my opponents say I have carefully considered all proposed legislation that has come before me, consulted widely and listened to my fellow Upper House members.

Then I have voted for what I believe is in the best interests of my constituents and all Tasmanians.

I shall continue to do that to Bills from a Liberal Government, while my Liberal Party fellow members will just wave them through.

There’s a link on my web site to my voting record for all to see, as are my speeches at kerryfinch.com.

Independence from party politics is also vital in the work of Legislative Council committees; how can you look at an issue and hear submissions if you are beholden to a party line?