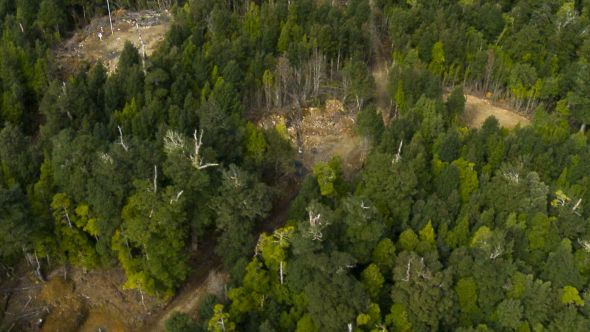 “The Mount Lindsay mine is a Pilbara style open cut super pit that will devastate a large area of the Tarkine rainforest wilderness within an existing reserve. The 3.5 x 3km disturbance area is the equivalent of 420 Melbourne Cricket Grounds and a 220m depth being over twice the height of the Sydney Harbour Bridge,” said Tarkine National Coalition spokesperson Scott Jordan.

“It is completely inconsistent with the protection of the Tarkine, and Minister Burke must act immediately to ensure that the Tarkine has the highest level of protection going into this assessment.”

In the absence of a National Heritage Listing, the Minister is legally unable to consider the impacts on the rainforest, the 25 watercourses to be disrupted, or the recognised wilderness values of the area in the mine’s EPBC assessment.

“The lapsing of the National Heritage Listing last December has left this area exposed and there is a urgent need for National Heritage protection for this wild and unique place. Companies including Venture are using the removal of the heritage protections to ramp up exploration activities including roading and drilling that are having a significant effect on the values of the area.”

“Enough damage has occurred to the Tarkine on this Minister’s watch.”

The Mount Lindsay site is part of the Australian Heritage Council’s recommended 433,000 hectare Tarkine National Heritage Area, and is within the Meredith Ranges Regional Reserve created in the 2002 out of the Tasmanian Regional Forests Agreement.

“We have lodged a new nomination for Tarkine Emergency National Heritage Listing of the Tarkine, as Venture’s proposal clearly demonstrates a ‘likely and imminent threat’ to the acknowledged National Heritage values as required by the EPBC Act.”

“The National Heritage values of the Tarkine are widely recognised, including by the previous Minister and the Australian Heritage Council. They haven’t changed since the emergency listing was applied by Minister Garrett in 2009, and the case for emergency listing now is as strong as it was then”.

“We are calling on the Minister to urgently re-invoke the Tarkine Emergency National Heritage Listing to ensure that the current Venture Minerals’ Mount Lindsay mine and the other nine known future mining developments are required to be assessed against the National Heritage criteria.”

The company has acknowledged an impact on the Tasmanian devil Sarcophilus harrisii and Spotted-tailed quoll Dasyurus maculatus subsp. maculates, in their referral documents.

The new listing includes updated mapping to remove the existing Savage River (below) and Hellyer mining leases within the Tarkine. This is consistent with the original (2004) nomination that sought to avoid impacts on existing mines at that time, and the removal of these leases ensures no impact on existing mining operations. The nomination covers an area of 442,194 hectares (down from the original 447,000).