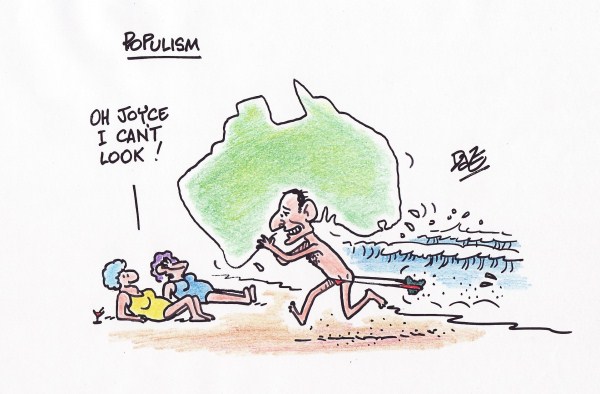 The title of this paper is a recent statement of political principle by Tony Abbott, the Leader of the Opposition; it offers an insight into his understanding of the duty of politicians in general and government in particular, in a representative democracy. He said what he and many others think democracy means viz., that politicians, when choosing their policies, should be guided by public opinion – their duty, as political officials, is to do what the people want.

This theory of democracy is called ‘populism’. It is a theory which, in the eyes of its critics, encourages politicians to exploit the ignorance of electors and use public opinion to justify a party agenda, or to run campaigns to sway opinion to their own ends, then cite it to justify policy, in each case with little regard for the public interest. It gives the media, with its power to influence opinion, a critical role, such that no one is surprised when party leaders and media barons seek to align the political ambitions of the one with the corporate interests of the other.

The criticism is relevant to the debate on a carbon price which gave rise to this appeal to sovereignty. The dispute had seen a challenge to Abbott’s policy from economists and business leaders who agree with environmental scientists that a carbon price, followed by an emissions trading scheme, is the best way to go. Media pundits point out, however, that the ‘great big tax’ campaign has aroused such apprehension that any party will now risk defeat if it puts a price on carbon, however necessary to the nation’s interests or to global security.

This is a good reason to pause and ask if Abbott’s theory of popular sovereignty is really what democracy means. Most people, for instance, want majority rule but not mob rule – no one wants a ‘tyranny of the majority’. But what is the nature of the difference and what bearing does it have on the duty of legislators who make laws and officials who enforce them?

We can clarify these matters by going back to basics. In its simplest and most defensible form democracy means only that the representatives of the majority have a stronger right to make the rules than any other person or group. Whether the rules they make are wise or just or moral or worthy of respect is a very different question – it can only be answered by looking at the values of the community. This is an important point, but is often ignored in political debates.

It follows that a majority in power cannot cite democratic theory in order to abolish a minority, or to deprive them of their rights, even if they have both public support and legal power to do so. It means the government is entitled to pursue its mandate, but not by unjust or immoral means, or to further unjust or immoral policies, regardless of public support.

Some people say this minimalist definition is too basic because they believe democracy, as a theory of government, includes certain basic rights of free speech, press and assembly, as well as rights to a fair trial and perhaps even a general, omnibus right to fair treatment. But this richer conception merely confirms the claim the bare-bones version makes clear viz., that the principles which underlie constraints on the majority are important for their own sake, not because the majority want them; they are no less important than principles of fairness which justify the latter’s right to rule.

What does this mean in practice? Consider the decision by a Tasmanian upper House several years ago to support gay law reform legislation. The anti-reform lobby had sought a referendum as the only ‘democratic’ way to settle this issue; in their view, if the majority wished to retain laws criminalizing homosexual acts, such laws must prevail. This, they said (pre-empting Abbott) is what democracy means. Reformers were understandably discomfited by this proposal; some insisted that it was not necessary because the public were already on side while others argued, also weakly, that such a poll would be divisive.

But the truth is such a poll must be irrelevant; to justify criminal punishment we need a moral reason and public opinion, however uniform and insistent, is not a moral reason of any kind. We might, of course, find a reason to defer to public opinion, and even a duty to act on it, but this is different. Democratic theory is a classic case of a duty to act on majority opinion, but the ideals of fairness which justify this duty also limit its scope, in just the way this paper has argued.

A moral reason rests on a moral standard or value, not an opinion poll. Hence the traditional reason for punishment is to protect the community by deterrence, which appeals to a utilitarian value of general welfare. An older and now unfashionable idea sought to justify punishment by an ideal of retributive justice, expressed in its crudest form as ‘an eye for an eye’. There are, of course, other theories of punishment but, whatever reasons they offer, none has argued that it is right to punish simply because a majority wish to. We need to justify giving way to their desire.

Not so long ago 70% of Australians thought homosexuality was wrong and should be punished; but if morality has to do with values, it is no less evil for a majority to punish what it disapproves of than a tyrant. This reasoning is widely persuasive in the case of punishment because the cost to the victim is dramatic; but the same logic applies across the board of moral justification.

We lessen the risk of such mistakes when legislators act on principle – when their policies are supported by reasons they can articulate and defend in terms of community values, and which are supported by the facts. We expect them to seek advice and to test such matters rigorously, not to give up the task and resort to counting heads. We certainly do not want them, when things get difficult, to pass the buck back to us, under a simplistic slogan that the public is ‘sovereign’.

Firt published on Online Opinion as: Morality and democracy: public sovereignty is a simplistic approach to policy