Forestry Tasmania spends significant amounts of “commercial in confidence” monies on media propaganda such as the Going Bush TV series and TV adverts promoting it as a sustainable and responsible forest manager, however detailed scrutiny of publicly available information casts FT in a somewhat different light.

My analysis of FT’s latest wood volume and values in respect of 2009/10 (1) shows that the value generated by volume ranges from $61 per tonne for native woodchips up to $136 per cubic metre for native hardwood veneer and, inexplicably, special species timber only produced $120 per cubic metre demonstrating that it has been sold for far less than its true worth.

• 50 were burnt on the forest floor as residue/waste

• 0.33 produced special species logs for the furniture and crafts sector 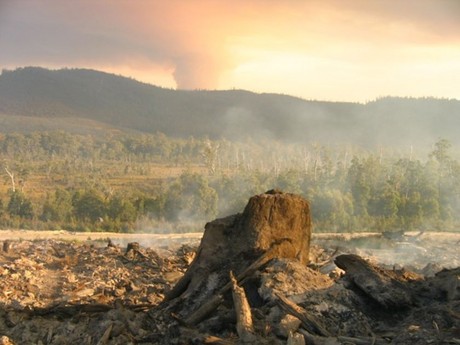 I can only conclude that there is something intrinsically rotten with a GBE which is legislated (1A) “to optimize the economic returns from its wood production activities; and the benefits to the public and the State of the non-wood values of forests” yet:

• Generates annual income of less than $1.5M for our iconic special species timbers which are valued at only $120/cubic metre which is similar to the price Tasmanians pay for firewood – FT claims (2) that more than 2,000 people are employed full time within the sector and a further 8,500 people participate in woodcraft activities as a hobby or on a limited commercial level which means that they must be paying less than an average yearly amount of $150 for some of the world’s most precious and beautiful timber species

• Signs a long term wood supply agreement with Ta Ann (3) which provides wood so cheaply that it was more economic for Ta Ann to establish, with generous taxpayer funded assistance, and operate its veneer mills near Smithton and Geeveston than in its own Malaysian homeland (4)

• Is the major contributor to an industry that has recently been estimated to burn 7.2M tonnes of wood as waste on the forest floor (7) which is more than double FT’s entire annual wood production volume (1)

• Is the major contributor to an industry that emits more carbon dioxide from planned burns alone than the rest of Tasmania’s current emissions of 8.4M tonnes of carbon dioxide equivalent (8)

• Significantly exceeded, with apparent impunity, the minimum legislated requirement to supply 300,000 cubic metres of sawlogs and veneer logs annually in each of the four years from 2005/06 to 2008/09 (1)

• Undermines the Statement of Principles to which it is supposedly bound by opening up new areas of HCV forests, extending contracts and actively seeking new low value Chinese markets (11)

• Misuses tens of millions of dollars of TCFA public funds converting thousands of hectares of native forests to plantations (12) despite claiming to have ceased converting in 2007 (13). This has also resulted in “the most expensive plantations in the world” according to evidence given by Greg L’Estrange to a parliamentary committee (14).

• Spends in excess of $100M on years of research and establishment of genetically improved (sic) non-native eucalyptus nitens plantations which were reputedly meant to provide high quality sawlogs (15) but now claims that an additional 94,162 hectares of plantation forest and investment of $500M would be required if Tasmania moved from native forest harvesting to plantation timber and that the existing 18,000 hectares of eucalyptus nitens would need to be converted at maturity to frost-sensitive eucalyptus globulus (16)

• Dismisses a carbon trading offer which would protect our native forests and generate $50-100M for Tasmanians every year for the next 25 years (18, 19)

• Spends millions of dollars on self-promoting media propaganda yet fails to repair washed out roads, bridges and tracks to visitor sites on the pretext that it “does not have the resources to commit to the extensive repairs” (21)

• Is unable to account for almost 200,000 hectares of Crown land which appears to have gone missing after a series of unusual transactions (22, 23)

• Is protected and never held to account by impotent Tasmanian bodies such as the EPA, Auditor, Ombudsman and Integrity Commission (24)

It is even worse when the Minister directly responsible for the dysfunctional performance of this GBE is criminally negligent in his duties and responsibilities to the Tasmanian people.

And the final insult is when the intergovernmental Heads of Agreement fails to recognise let alone address any of this litany of gross failure (25).

This article has been drawn together to summarise some of my recent disparate comments posted on TT. PB is a Tasmanian-based free spirit independent of any political party. Pb on the other hand is the chemical symbol for the element lead which is one of 92 naturally occurring chemical elements in the Universe.