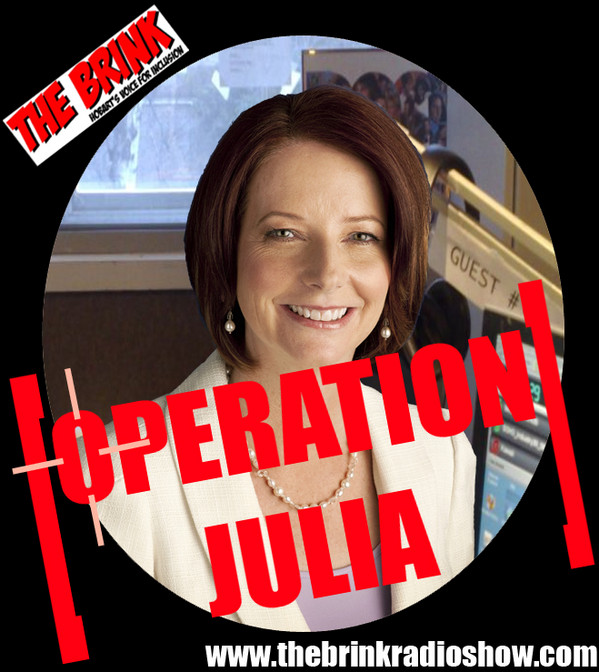 The show started its Operation Julia campaign in May and even held an ‘International Julia Gillard Day’ in June to drum up support for the campaign to bring the 27th Prime Minister of Australia to Hobart’s only Youth Station. With the confirmation that the interview will take place and go to air this morning, its hosts Ben Waterworth, Kelly Trepkowski and Peter Wallhead are thrilled with its success.

“This once again shows that people power really can make a difference. It is fantastic that our campaign has succeeded and it’s with great excitement that we will welcome Prime Minister Julia Gillard to the ever expanding guest list of The Brink and Edge Radio.” host Ben Waterworth says

“Not only is this a massive coup for the entire station, it is also a massive coup for the youth of Hobart, as they will get to hear the Prime Minister in a way they have never heard her before. We will be completely avoiding politics and instead talking about things ranging from her beloved Western Bulldogs to what type of Cheese she enjoys on her crackers. It will be an interview that Hobart will remember for a long time to come.”

As well as having the Prime Minister on this morning’s episode, Ben, Kelly & Peter will also be joined live in studio by North Melbourne great Glenn Archer, in town to talk about his role with the Army’s 2011 Challenge Award. The 2 time premiership player and Norm Smith medallist will also be talking about his stellar career in the AFL.

The Brink is broadcast live every Friday morning on Hobart’s Edge Radio from 7am till 10am and has gone on to become one of Hobart’s favourite breakfast shows. Edge Radio itself has recently celebrated its 8th year on air and has become Hobart’s number one choice for youth issues as well its leading community station.

When: Today Friday, 1st of July 2011. Glenn Archer in studio from 8.15am, Julia Gillard interview aired after 9am.

Download: A podcast of both interviews will be available later today
Ben Waterworth, Edge Radio