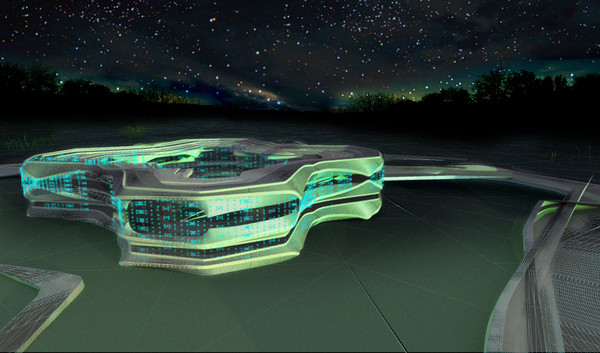 THE HOBART ORGANISING GROUP FOR MAJOR EVENTS (H.O.G.M.E) TODAY RELEASED ITS SECOND CONCEPT IMAGE FOR A PROPOSED VENUE FOR IT’S BID TO BRING THE OLYMPICS TO HOBART, WITH THE DESIGN FOR THE DAVID BOON CENTRE A STUNNING FUTURISTIC PIECE THAT FITS IN WELL WITH THE PREVIOUSLY RELEASED DAVID FOSTER STADIUM.

The venue was designed by RMIT University student Lindy Carolyn Hayter who also designed the stunning David Foster Stadium and continues along the theme of incorporating Hobart’s stunning mountainous terrain as well as its native flora and fauna. The design uses smart materials such as photo luminescent (light emitting) and various other ‘SMART’ materials to lower energy consumption significantly, with its eye-catching design and stunning construction adding to the proposed Olympic site and giving Hobart another planned internationally recognisable venue.

The centre itself is proposed to be a multi-purpose venue, used for several sports throughout the bid including Taekwondo & Weightlifting with the potential also for Basketball & Gymnastics and its seating capacity would change depending on the events held. Envisioned at the Queens Domain amongst the proposed Hobart Olympic Park, the centre would sit side by side with the other bold stadiums and arenas and after the games would continue to be used as a multi-purpose venue for all Hobartian’s to enjoy and add another much needed location to attract major events to the city.

“This design once again speaks volumes for the scale and size of this bid and how much potential there is within the city of Hobart to be put out on the world scale. It is another stunning visual piece of architecture and one that I believe will have not only the citizens of Hobart talking but those of the International sporting and architecture community also. The building itself would stand out significantly amongst our great city and together with the stunning David Foster Stadium it certainly would put Hobart on the map in more ways than one.” H.O.G.M.E President Ben Waterworth says

“Having the centre named after one of our greatest athletes David Boon is a no brainier, with his reputation as a strong, hard fought athlete encompassing everything this bid already has achieved. His career on the international stage as well as the cult status he has achieved since his retirement also goes side by side with our bid, and we believe it is the ultimate honour to bestow on an individual after such an outstanding contribution on the world stage.”

The bid continues to attract a large fan base of over 12,000 people from over 65 countries around the world. The design for the venue comes during an important time for the bid, with the final stages of the 2020 candidature process being undertaken over the coming months and H.O.G.M.E are in the initial stages of making several big announcements throughout the next few weeks.

Further details of the bid and the design, as well as images of previous venue designs can be found by visiting www.hobart2020.org or by searching Facebook and Twitter for ‘Hobart 2020’
Ben Waterworth, H.O.G.M.E President