Donate to Tasmanian Times –
BSB: 807009 Acc: 60178142
no new content for a few days,
site is being migrated
Tasmanian weather
forecasts and warnings
Tasmanian roads –
latest alerts & reports
new writers & contributors welcome,
please contact us with your submission
Want to have a say?
Send us a letter for publication

The Rudd Labor government acted correctly when they issued an apology to the Aboriginal people of Australia. How about the ancestral relatives of the Australian people in New Guinea? Should the Australian government now apologise to the West Papuan people, the original owners of a land the size of France?

Why? Because between 1957 and 1962, Australia was working with the Netherlands toward the independence of the whole island of New Guinea. We helped to raise the expectation of the West Papuan people for freedom.

As the story in the Sydney Morning Herald of 18 October by Tom Allard demonstrates, telling of videos that were posted on YouTube of Papuans being tortured, the hope for freedom has not died in the heart of West Papuans. This freedom is a flame that threatens to burn for centuries, that may only be suppressed with Papuan blood.

The film has been removed from YouTube because of its graphic nature, but part of it can be seen in this story from The Age newspaper of 19 October:

The story has also been run in more detail on the UKs Channel 4 News, Showing the brutal treatment of West Papuans by men in military uniforms, showing West Papuans being kicked in the head:

In a story in The Age of 23 October Indonesia admits that members its military has committed this atrocity and that they are investigating:

In the Story Phil Robertson, deputy Asia director for Human Rights Watch is quoted as saying, ”It’s hard to tell what’s more shocking about the video – the horrific abuses depicted or the perpetrators’ apparent confidence that their actions are acceptable.”

During the last Ice Age and up until around 8000 years ago, New Guinea was part of mainland Australia, as was Tasmania, in a larger land mass referred to as Meganesia. The people of New Guinea are therefore the northern relatives of the Australian Aborigine and have been in their lands for as long as the first Australians have been on the mainland and in Tasmania.

Similarities in appearance between Papuan and Tasmanian indigenous people have often been noted, with some suggestions that they were the first to arrive in Meganesia.

The Papuans were among the first in the world to develop agriculture and before the arrival of Dutch colonists in the late 1800s, fiercely defended their lands from outside incursion. The way for colonisation was opened by Christian missions, softening their fierce ways, which is why a majority of West Papuans are now Christians.

New Guinea was the last region on Earth to be colonized by European powers, with a Dutch colonial presence in west New Guinea only beginning in 1898. When Japan invaded New Guinea in 1942, there were still only fifteen Dutch government posts in Netherlands New Guinea.

When Indonesia won independence from the Dutch in 1949, they also demanded the western half of New Guinea, even though this was a land of Papuans, just as in Papua New Guinea. The Dutch began preparing the Papuans for independence, but year after year the Indonesians kept demanding that the territory be given into their hands.

In 1957 the Australian and Dutch governments signed an agreement to work together toward the independence of the whole island of New Guinea. The outcome of this agreement could have been the emergence of one strong independent nation for the whole island of New Guinea. Many Australians worked with the Dutch in West Papua at the time, to help prepare the West Papuan people for their emergence as a free and independent nation.

When the Dutch held the first election of a West Papuan Council in 1961, when the morning star flag was raised and flew next to the Dutch tri-colour, West Papua chosen as the name of the new nation and 1970 set as the year for independence, the Indonesians were furious, declared open war and began invading New Guinea. A full-blown war with Indonesia appeared imminent, in which Australia would have become involved with the Dutch in defence of New Guinea. This would have been a just fight, just as we later helped to defend Malaysia from Indonesian aggression.

In 1962, fearing treaty arrangements with the Dutch would drag the United States into a war with Indonesia, the Kennedy administration intervened and told Holland to get out, Australia to butt out and paved the way for Indonesia to walk in and become the new colonial power in New Guinea.

In 1962 the Cold War was hot and the United States feared that Indonesia would become a communist nation, if they did not acquire West Papua. The Americans were looking toward a war in Vietnam and did not want a second front. The Dutch Ambassador, Dr Van Roijen, quotes Kennedy from the time as saying, “those Papuans of yours are 700,000 and living in the Stone Age.” (page 26, ‘Indonesia’s Secret War’ by Robin Osborne, 1985).

The brutal art of Realpolitik won the day and the West Papuan people and their lands were sold to Indonesia to buy a nominal pro-West peace, paving the way for a bloody occupation of Papuan west New Guinea and later, the brutal invasion and occupation of East Timor. Humiliated at being forced out of New Guinea under duress and threats, Holland insisted that the West Papuan people be allowed a vote on their self-determination by 1970, to be run and supervised by the United Nations. In 1962 West Papua became the colonial possession of Indonesia.

Many West Papuans at the time still lived in isolation in the jungles and had not yet come into contact with the outside world.

All West Papuan flags were burnt. All trappings of an independent West Papua were destroyed. Any dissent was brutally suppressed. Any ideas of independence were viewed as treason.

In July 1969, while the world was watching Neil Armstrong step onto the Moon and President Nixon was in Jakarta, specifically to draw media attention away from New Guinea, Indonesia began a vote to determine the will of the West Papuan people on independence. At the time Indonesia was also suppressing an armed rebellion by West Papuans.

The running of the vote saw Indonesian colonial authorities selecting 1025 males, with no women included, who were lectured under the shadow of guns before being told to step across a line drawn in the dirt.

A United Nations observer team was supposed to be on the ground to monitor this strange poll, but the Indonesians went ahead without them. The UN team rushed from Jakarta to observe the last 20 percent of the vote. So on the basis of UN representatives observing a couple of hundred Papuan men stepping across a line drawn in the dirt, the United Nations accepted the outcome of the Indonesia run Act of Free Choice and declared west New Guinea to be part of Indonesia.

West Papuans frequently refer to the Act of Free Choice as “the act of no choice” or “the Act Free of Choice.”

Two of the Papuans involved in this blatantly rigged plebiscite attempted to get to the United Nations in New York to protest, to tell the truth about the fraudulent vote. They were assisted by Australians in eastern New Guinea, who were angry at how the West Papuans had been treated. Before they could fly out, they were arrested by Australian colonial authorities and escorted from the plane as it was about to take off.

Australia voted “yes” in the United Nations to one of the greatest crimes of the twentieth century, with the sale of a whole nation of people and their land, like so many slaves, to buy peace. Such a purchase of peace happened once before, when Nazi Germany invaded Czechoslovakia in 1938 and the British Prime Minister, Neville Chamberlain, declared “peace for our time.”

If the Act of Free Choice were held today, could Indonesia get away with it?

We cannot change history, but as with East Timor, we can at the very least stand up for what is right. If anyone believes that the Australian government should offer an apology to the people of West Papua for failing them in their hour of need and helping a fraudulent vote on self-determination to become accepted in the United Nations, they could ask their elected representatives to call for an official apology to the West Papuan people, delivered by the Prime Minister. 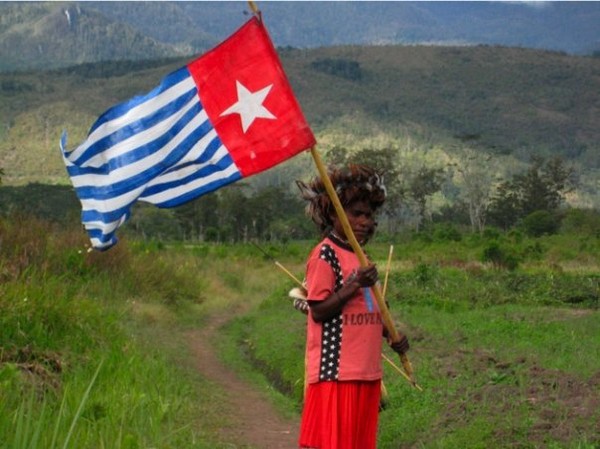 We could also invite the United States and other nations to issue a similar apology. We could ask the United Nations to overturn the fraudulent Act of Free Choice and proceed to organize a properly run plebiscite on West Papuan self-determination. This is what the West Papuans keep asking for.

Until such a vote is held, a shadow will continue to fall across the heart of Indonesia and all expressions of freedom by West Papuans will be brutally suppressed with boots, guns, incarceration, rape and torture, as this has proven to be the only way that Indonesia is able to suppress West Papuans from calling for their freedom in greater numbers.

West Papuans have been frequently shot on sight, or jailed for up to 20 years, for daring to raise the morning star flag, that once flew freely in West Papua for a few short months, when the West Papuans believed that we were working with them toward their freedom as an independent nation.

Will we hear their decades-long cry for help, or do we support Indonesian suppression in West Papua, to help ensure that more West Papuans cannot escape to a life of freedom in Australia?

Many observers have concluded that the situation in West Papua is one of genocide, as the West Papuans are side-lined by Indonesian immigrants dominating the economy and repeatedly humiliated, brutalised and killed in a wide range of circumstances by Indonesian military and police, a situation that has been going on since 1962, when all West Papuan hopes for the future were crushed beneath our acceptance of Indonesian demands.

American Samoa’s Congressman, Eni Faleomavaega, who recently participated in a US Congress hearing on West Papua, in an interview on Radio Australia on 27 September said, “The Indonesian military did the same thing to some 100,000 West Papuans and that’s just a real conservative estimate on the killings that took place by the Indonesian military over the years. Some estimates go as high as even 200,000 West Papuans have been murdered and tortured and killed mercilessly by the military. So, yes, there are questions of genocide.”

An apology to the West Papuan people would be a good first step toward putting the record straight and helping to ensure that they are safe, for while the flame of freedom burns in their hearts, Indonesia continues to jump on their hopes for freedom and justice with military boots, to kill that flame and clear the land for Indonesian colonists.

Image found at this site: