SO THE COMMENT I made at the football tournament, something like “thank God everyone’s so chilled here, given they all carry machetes” was somewhat ill-timed. That night two drunken men got in to an argument at the ‘Canteen’, which is about 50 yards from our house. They were kicked out and continued arguing a short way up the road until one slashed the other across the back of the neck with his machete. Apparently he laid bleeding and dying on the side of the road for about two hours with people afraid to get involved and the only person nearby having a car being the ‘Canteen’ owner. The man died on the side of the road and we have to walk past the blood stain every day.

We have quickly developed a hatred for the ‘Canteen’ and its owner who makes his living selling ‘cañas’, a cheap nasty liquor made from sugar cane that destroys livers within a few years, to minors and alcoholics. We have now realised that this drink and alcoholism is a serious problem here.

It is tragic seeing people who can’t afford to feed their children passed out on the side of the road, yet not uncommon. It is difficult not to harshly judge these men, predominantly fathers, for their depravity. Yet, it is far more difficult to excuse the manufacturers and vendors of this foul drink, which is deliberately highly addictive and destroys peoples’ physical and mental well-being with disturbing speed. The victims are not only the families and communities of these alcoholics, but the men themselves, who have succumbed to the lure of escapism from the brutal reality of poverty and become hooked. 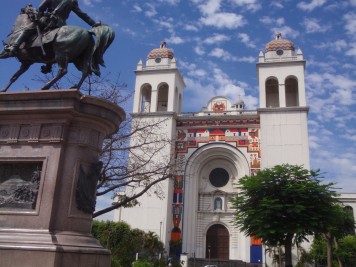 I recently finished a long book on the history and present situation of El Salvador’s indigenous peoples. The book quotes an indigenous leader explaining that the life of his people evolved around corn and that all they wanted was some land to grow it. Life for the country’s poor rural population still revolves around corn. People eat tortillas (made simply from ground corn and water) everyday, generally for breakfast, lunch and dinner. Sometimes they are called ‘pupusas’ when they have a filling of mashed kidney beans, another staple of the local diet. There is also a soup-like food called ‘atol’, which is made from ground corn, milk and water.

The diet is diversified mainly by opportunism. There are lots of small iguanas here and people often manage to catch these in addition to the occasional armadillo. The younger boy we live with (Victor) catches and eats anything. Mangos, melons and coconuts are also reasonably common in the summer months.

We now know more about Ramon the 85 year old man who eats at our house every day. He is a quiet old man who was kicked out of his family home because he is too old to work and they can’t afford to feed or look after him. After a homeless spell Erica, who we live with, now feeds him every day and he sleeps at the house of her father Luis, who is an ex-guerrilla and also eats at our house. I return now to the indigenous. For most of last century it was the government approach to deny the existence of the indigenous. It was seen as the best way of ‘nation-building’ to portray a homogenised population of ‘mestizos’ or mixed race, that being Spanish-indigenous. Thus, the population was at least semi-civilised. For a long time there was little separation between peasant and Indian in general consciousness, as all Indians were poor, and as such if one was poor they must be Indian.

It wasn’t simply denial of their existence, but attempted destruction. The worst point in this history was 1932 when ‘La Matanza’ (the massacre) occurred. In the north-west of the country several thousand indigenous rebelled against their effective slavery, loss of land, lack of political representation and harsh repression. The rebellion against poorly organised people without firearms was quickly squashed with some 800 being killed. What followed was a country-wide government and military crack-down pushed by the large plantation owners of the oligarchy. Most estimates conclude that in a couple weeks 30,000 were killed. A missionary at the time wrote “it would seem they are going to exterminate the Indians”.

Not for the last time the Salvadoran government managed to keep the USA on side by framing the rebellion as a communist uprising. Bodies were everywhere in some villages, prompting one international organisation to write to authorities not with concern about the killing, but rather regarding the potential spread of disease due to the difficulties of effectively burying so many dead and advising on deeper graves containing fewer bodies. The killing continued after the military ceased their campaign, with mobs of mixed race people ceasing the opportunity to steal indigenous property. This left a race frightened and ashamed to admit their identity and was perhaps the single biggest contribution to the loss of indigenous El Salvador.

This hidden identity has only really changed since the eighties as the changing views of the international community started to affect the country. These changing views are not that unfamiliar in Australia, whereby society began to celebrate diversity rather than strive for homogeneity. This has brought its own problems as government and business interest has been primarily that of the realisation that respect for indigenous culture may assist in applications for international investment, aid and tourism. As such, indigenous culture has been moulded to suit these aims, rather than authenticity. An indigenous population desperate for help has had to remould its image to whatever is most likely to receive help. We have now visited the capital, San Salvador, to spend the weekend with the Director of FUDECOM (Dr. Antonio Hernandez) a NGO here, which works on projects to alleviate poverty and ill-health. On the Saturday we visited Izalco, a town central to the 1932 massacres. We met with community leaders on the site where thousands of murdered indigenous were hastily buried, which is next to a ruined colonial church. The people were literally begging us for help during the personal introductions, to the point where Antonio had to interrupt the meeting to explain that we were there to listen with the purpose of documenting their plight to raise awareness outside the country, not to provide economic help. The massacres still weigh heavily, both psychologically and economically on these people, who were very quick to tell us about the events of 1932.

The rest of the weekend was spent around San Salvador, which turned out to be a shock of the opposite kind. After a few weeks in the country it was the first time we had seen ‘the haves’ rather than the ‘have nots’. Seeing the heavily guarded shopping centres and neighbourhoods of El Salvador’s rich was tormenting. These people drive past their fellow people starving on the side of the road to throw money away to foreign chains and imitate the culture of the USA. Our friend Chico who was a Salvadoran refugee in Australia commented to us, “I love Australia, you can’t tell who is rich and who isn’t”. I thought he was wrong until visiting San Salvador. Laura and Anna at Laura´s home in San Salvador

We visited the tomb of Monseñor Romero, which is located in the crypt of the cathredarl pictured above. He was a cCatholic Priest and is a national hero of the left and of the poor people of El Salvador. He was gunned down whilst giving mass on March 24 1980 by a government-backed death squad. This happened one month after he had asked the United States to stop supporting the Salvadoran government´s violent repression and days after an impassioned speech calling on the imfamous National Guard to stop killing their brothers. The death squad also opened fire on his funeral killing over forty people. 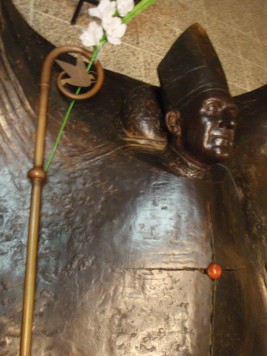 The tomb of Monseñor Romero

Since the trip to San Salvador we have spent a lot of time visiting and interviewing former leftist guerrillas from the civil war. We have realised now that though it seems like an unfinished garden shed to us, the house we stay in is very much a ‘middle class’ home here. We interviewed an 80 year old former guerrilla the other day, who people call ‘Cherito’ (Little Mate) and despite his optimism about life, the poverty in his village and his home freshly shocked us. More on Cherito and the ex-guerrillas in the next postcard…