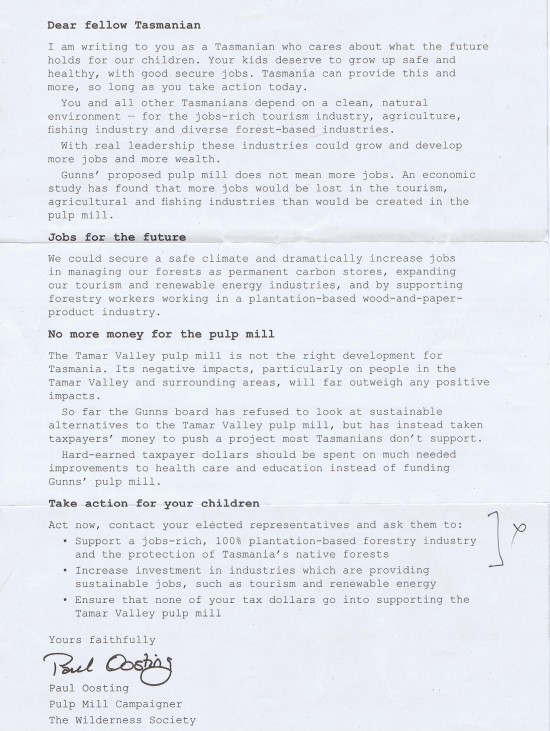 According to many experts, the planet is facing a potential catastrophic change in the climate as the atmosphere heats up. The most common theory is that this is due to excess carbon compounds in the atmosphere that are holding heat from the sun and that are mostly formed by burning fossil fuels.

One detrimental factor is the removal of many of earth’s old growth trees that have stored carbon for hundreds of years and protected deep organic soils. This has been done both to clear land for other uses and to provide fibres and timber for the forestry industry.

In Tasmania, the forestry industry is dominated by one corporation. The government agency charged with controlling forestry, Forestry Tasmania, relies on this one corporation for virtually all activity, revenues etc., and consequently has become ‘captured’ by them, a situation described by forest actuary Naomi Edwards as a monopsony.

Forestry Tasmania and Gunns Ltd have entered into a 20 year wood supply agreement that offers forest timbers to Gunns chippers at $15 tonne (approx) delivered which is well under the cost of growing a tonne of timber in a plantation currently over $35 tonne. The wood supply agreement thus sets a competitive floor price for publicly owned timber that cannot be matched by private plantation timber.

For nearly 2 decades, the forestry industry has had government support to establish tree plantations around Australia. This program called ‘Plantation Vision 2020’ targets a total of 3 million hectares of plantation to be established by 2020. Managed Investment Schemes that gave tax incentives for growing trees have now collapsed and many ‘investors’ have lost their money to the forestry industry and its various partners in the schemes. The overall effect of the schemes was for taxpayers and ‘investors’ to pay for the inputs to forestry operations.

Despite the MIS crash, in November 2008, both federal Liberal and Labor parties and the federal government approved tax incentives to establish some 35 million hectares of tree plantations around Australia. The notional basis for these plantations is to act as a ‘carbon sink’ thereby providing a basis for taking money from polluters against the carbon ‘tonnage’ locked into the growing trees.

Using past prices of $10,000 ha to grow the trees, that’s $350 billion that the forestry industry stands to gain plus huge amounts in income from the sale of ‘carbon credits’.

…committee for Economic Development Australia’s (CEDA) director of research and policy, Michael Porter, warned there was ‘a very threatening prospect that emissions trading would create a vast and uncertain set of derivatives trades based on carbon debts and credits.’ Derivatives. Remember them? Porter certainly does: ‘A carbon bubble’, he says, ‘could eventually dwarf the recent GFC problems.’ He goes on: ‘The trades will be vast because the big polluters won’t be trading (greenhouse gas) emissions but carbon emission derivatives under a poorly understood and infant policy: the CPRS.’ Australian

This is a VERY BIG, MAGIC PUDDING! We can expect those who will benefit to go to any length to assure that this goes ahead.

As with many ‘developments’ approved by ALP governments; only the benefits of the program were reviewed; the proposers of the project controlled the information inputs; there was no independent advice or analysis; there was no community consultation; and the Labor and Liberal political parties both came out in support of the program.

Excessive groundwater extraction created by many same age trees planted close together and sending deep roots (up to 15m) into the soil to remove water. Plantation water use has been measured at 2 – 4 million litres (Ml) per hectare (1/100 sq. km) per year over and above ordinary cropping needs (grasses etc). Plantation owners do not pay for that water. The notional new carbon estate of 35 million ha will therefore need 70 million million litres of water each year (70 cu.km or 70 Teralitres). Australia’s current use of water for all urban, irrigation and industrial uses is 24 Teralitres.

Provide native animal havens that harbour multiple wallabies etc. but, since the plantations provide no food, those animals need to forage and tend to eat food from neighbouring farms, thus diminishing crops and/or increasing farmers costs of fencing.

Toxins and biocide overspray of adjacent properties that can contaminate food crops, reduce the value of food produced and destroy opportunities for organic certification.

Toxins and biocides leaching into waterways and contaminating downstream water supplies that are use by humans and for irrigating food crops. Tasmania’s ground waters are now contaminated with various biocides.

Community jobs and cash flow losses that follow from converting active farm lands producing annual food crops to permanent tree plantations that take between 1 – 3 decades to produce a crop. Tree crops are not usually processed by local communities except where milling and chipping facilities are established, even then the jobs on offer are minimal.

Local Council rate losses because plantation owners are exempt from land taxes so when food producers sell to trees, Council incomes drop which usually means rate and cost increases to others in the area or service reductions.

Push farmers out of areas as more areas are converted to trees and problems increase for remaining farmers becoming surrounded by plantation (loss of water, creek and river changes, overspraying, pest incursions etc) , so they are more likely to be pressed into a position to sell. Because of the ability of plantation growers to get their cash up front subsidised by taxpayers, tree growers are usually able to buy land on offer. The effect is of ‘surround and replace’, with plantations becoming dominant.

Land use and legal restrictions occur because plantations are often declared ‘in perpetuity’ thus relieving them from other Acts (e.g. Land Use and Planning) and preventing land use for any other purpose other than forestry. These distortions, funded by taxpayers, can hit rural communities hard as they remove the flexibility of land use that exists with normal farming.

Rural cost increases as log trucks and heavy machinery use rural roads to plant and access plantations but contribute nothing to the upkeep of those roads and bridges. (Forestry is exempt from those payments)

Control, growth, power and money are the apparent goals of this industry. They have achieved control of many political groups, local Councils, State governments, government departments and federal department, by populating them with their own supporters and moving aggressively to contain embarrassing revelations or leaks.

They are able to control much of the debate in the public sphere, and can bias stories and reports in their favour. They are relatively cashed up and have laboratories, PR departments, helicopters and other assets to impress decision makers which creates insuperable lobbying asymmetries for the public.

Their wood chipping activities have destroyed much of Tasmania’s native forests along with large tracts of Australia’s forests. Tasmanian forestry interests have been pressing for many years to get ‘world scale’ pulp processing facilities that they believe would create more wealth for them.

Overseas pulp and paper suppliers like Jaakko Poyry are pressing Tasmania to acquire their mills as it would lead to over $1 billion in sales revenue plus tens of millions per annum in project and mill management fees.

The MIS business probably put up to $20 billion into forestry interest pockets (2 million ha @ $10,000 /ha) and that was ‘easy money’ paid up front by gullible ‘investors’ and taxpayers who had no choice.

There seems little doubt that destroying our environment will ultimately destroy us. Concerns currently focus on the climate, particularly on the destruction of the ‘lungs of the planet’, the various native forests that protect massive organic soil deposits and convert carbon dioxide into oxygen, locking the carbon into their structures as they do so.

The risk that seems to be developing is that the very people who have created the most pollution or environmental destruction, will end up in the driver’s seat controlling our responses to climate change. In Tasmania, environmental damage is created by forestry, mining and smelting companies, all of whom enjoy substantial government support, including heavily subsidised operations.

Without the many subsidies, these industries could not afford to operate profitably, therefore it is logical to conclude that if the subsidies were stopped, then the environmental damage would stop.

The battle is therefore political and requires governments to act to stop the damage and act to prevent further damage. One way to do this is for communities to require politicians to cut support for these industries.

Currently there seems little doubt that the Tasmanian political system is heavily biased towards forestry interests. Those interests already have a 20 yr forest wood supply agreement (see above) in hand, they have some $20 billion in pre-paid timber on plantations and they have legal priorities that set them above the laws that apply to everyone else.

Forestry interests have spent huge amounts of money, time and effort to get political ‘mindshare’ and priority and their efforts have been rewarded.

To expand their power they also hope to get wider community support so that they can claim wider political influence to control larger areas of Australia’s land, water and forestry assets. Their activities have included penetrating environmental organisations like The Wilderness Society to achieve their various goals.

Recently The Wilderness Society wrote a letter to residents in Tasmania that appeared to be a remarkable shift in priority to taking political action to support the plantation industry.

“Act now, contact your elected representatives and ask them to:

Somehow then, under a high moral ground heading, and with two incredible claims (plantations can produce a safe climate and dramatically increase jobs) the Wilderness Society is calling for readers to get more political support for plantation forestry.

“Labor and Liberal have told us endlessly about the jobs rich plantation industry yet when Great Southern collapsed they owned 57 properties covering 17000 hectares and employed just 7 people! And their plantations were taking up valuable soil and water resources.”

The environment movement must know that the jobs argument is desperately flawed.

As to the secure climate idea, if it is our use of fossil fuels that is the major culprit, then a few generations of trees planted over 100 years cannot possibly compensate for our burning of carbon fuels from deposits from 100 million years worth of trees.

Thus both of the claims made by the Wilderness Society seem entirely false. Why such claims would then be used to call for support of the plantation industry is anyone’s guess. At the least this seems to be a serious risk to their climate credentials as well as giving politicians a false impression of community support for forestry.

Given that forestry companies already control the forests, exhortations to provide even more support for plantations could too easily end up with forestry controlling both our forests and most of our farmlands.

This is a risk that many do not want to take, certainly not without wide consultation, independent expert advice and appropriate processes to assure that decisions are taken wisely.

TAP is an information community organisation formed to lobby to protect its members, their health, lifestyle and investments from the impacts of a forestry industry pulp mill proposed for Northern Tasmania.

† Slip shift is a card handling routine in which a card is secretly slipped from a deck and its position shifted to a different position in the deck e.g. from middle to top.

Note. The author welcomes constructive criticism and new information that adds to our understanding of these matters.