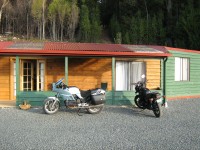 This is a journey back in time … and it begins (properly) in Devonport just after Spirit has nosed from its berth and tracked for Melbourne across restless Bass Strait.
It is early Saturday and overcast. Feet are numbed, buzzed into insensitivity by the high-speed vibration of the late-start bike ride from Hobart.

The journey is a bit of a shock. The pre-dawn promise of clear skies give way just beyond Brighton to freezing wet fog, which reduces this pampered pussy to a shaking hand-claw-frozen iceman levered from the bike by necessity at Oatlands to thaw from the heat of the engine.

Re-constituted, refuelled, remounted, 10kms later and the sun rising into the clear blue sky has burnt off the fog. The sun starts to thaw the leathers … but 30kms later it changes again to cold overcast. This is after all, Tasmania … a micro-climate every 50kms.

The speed rises on those lovely long, pre-Launi straights — hope they don’t have rear-facing speed cameras (bikes don’t have front number plates) … and the 100kms from Campbell Town to Devonport is completed at light speed.

And there, waiting is brother on his Bimmer, tummy rumbling for bacon and eggs … which very soon after are monstored with buckets of tea and the solicitous attention of the Dannebrog cafe waiter.

We sit outside watching the Mersey … and then the sun bursts through the overcast. It’s going to be a good day.

We mount, and head inland across the archetypal rolling lush countryside of the North-West. Some people navigate life through the gut … there is a strange feeling there along with the bacon and eggs … and this always happens when North-West Coast farmboys come home. It is probably the familiarity of the lush green hills generated by the impossibly rich volcanic red soil. Ashes to ashes, dust to dust, this is the soil from which you came and to which you will return …

We roll over a big hill, navigating between the cowpats and the red-stained bitumen of potato-paddock entrances and roll down into an impossibly beautiful little valley, a big blue dam on the left and the entrance to a friend’s farm on the right.

Down the gravel and up to the kitchen table laden with sausage, cheese olives, dips and fall-down farm apple cake, and cleanskin red.

An afternoon of conversation later and we have crossed all those troubled waters of Tasmanian life. Our hosts are incomers … mainlanders who came for mine work 30 years ago and are about to be accepted as nearly locals. They’ve raised their kids here, seen them leave, come back, leave. They’ve tasted the bitter divisions of a polity seemingly intent not on uniting this island community, but keeping it divided.

They rail against the political leadership, believing that the political parties’ primary constituency is The Big End of Town. They concur with the analysis that we may have changed little from the colonial profile of Master, Overseer and Servant … most Tasmanians insecurely seeking sustenance from the hands of the Masters and unwilling to take dangerous, potentially rewarding leaps of faith. They talk of the fear of speaking out too publicly or loudly.

In 30 years on countless journeys to the mines they have watched the landscape change from the rollings hills and complex bushland to monoculture sterility, and they don’t like it. They wonder why the Government trumpets a woodheater buyback scheme for Launceston … and allows mushroom clouds of burn-off smoke to ink the clear blue autumn skies over their home. Don’t they know what we have got, and are losing fast, they wonder.

But this, where the sun sparkles off the nearby dam and the gums are alive with birds is still a glimpse of a paradise.

We drink the last of the summer wine.

Then, it’s back on the bikes for the prime target of our pilgrimage: Natone Primary School, a cluster of impeccably maintained buildings, a coupla of kms from Stowport’s old Post Office.

We are here to celebrate the 50th anniversary of the opening of then Natone Area School, grades 1 to 9, priming the kids of farmers to be the next generation of farmers.

And those beautiful, fussed-over-by-committed-parents-and-friends buildings are chocka! Over a thousand have come from all over Australia to sift the memories of school life from 50 years ago.

Here’s Graham Smith’s, recorded in the massive book of reports, recollections and photos compiled in a labour of extraordinary love, primarily by Leanne Aitken:

I remember sometimes Stan Elphingstone would carry me on his shoulders, as we walked the three miles to school. I remember being caught with my hands in my back pockets during assembly, and received the cane as punishment. I made sure I never did that again.

I left school at the age of 14 years. I worked on the family farm, then at Kilpatricks in Wivenhoe, the sawmill at the APPM, and am now a farmer at Natone. I married Noeline Walker and our children, Mark and Janelle, also attended the school.

It was a mile or two, across Rutherford’s paddocks, to get to Natone Area School. From my parent’s little weatherboard house my brother Cedric and I crossed over the home paddock, up onto the top paddock near the swamp with its winter-filled lake on which majestic black swans reared their young.

Past the remaining clump of small and medium-sized eucalypts near the lone-white sentinel rearing 70m into the air; remnant testimony to the land once covered in such magnificent giants, logged by hard labour to make way for the rich pasture which fed the 30-40 cows providing the living for my parents and their two sons.

Then, over the the Rutherford’s lush clover pasture paddocks, along the narrow dirt wall of one of their dams, to the stile into the grounds of Natone Area School.

Into the grade 6 classroom, with the cloakroom behind the blackboard where the schoolbags and raincoats were hung.

A brief period of play — sometimes the odd play-fight (I’ll nevr forget being judo-flung by the wily, and very small, kid, fresh to the school who had been living with his dad in the bush and only came to school every now and again). Then the line-up in the quadrangle where Mr Hunt addressed us with the news of the day. Dismissed, we trooped to class.

Mrs Clark stood with that time-worn, brook-no-disobedience authority for which she was renowned and sometimes feared. An old-style learn-by-rote teacher who instilled the most wonderful never-to-be-forgotten lessons into our sometimes unwilling minds. She was so good at what she did in that duty-of-care-to-the-next-generation way; how much of later understanding of the English language can be traced back to her and her fellow teachers’ disciplined teaching. Thank you Mrs Clark.

And thank you Natone Area School and (I can say in all honesty) all the teachers who endured my presence in their classes. Thsi was my first experience of school life and I defy anyone to have had a better one. The school was small, the teachers were caring; the facilities were new; the classrooms warm; the view from the hill spectacular! And there was care and comitment. Perhaps that is what I remember most. The palpable sense that the teachers cared; they wanted you to learn, they wanted you to succeed.

Mine was the first grade 6 generation able to esily go tohigh school, way back n 1963! AFter much campaigning by the parents, a school bus was eventually put on the run to take a few kids to Burnie High School.

How momentous was that! I remember a few of us going for the first time; Roger Badcock and Gaye Elphingstone were among them.

For me it was a bit of a terror. Not the bus ride which took one and a half hours each way, but the experience of moving from the warm, protected womb of Natone Area School to the much more indifferent world of Burnie High School where the disdain for we country folk was palpable. My sensitive soul recoiled for years at the derisive caption placed under my Matric photo inthe Year Book: “You can take the boy from the country, but you can’t take the country from the boy”.

We see so many faces, shake so many hands … which in some cases are barely recognisable from the embryonic milk monitor, prefect, sports star, teacher’s pet of up to half a century ago.

It is so good to see them … and it’s just the start.

We remount, then dismout in another impossibly beautiful little valley higher up in the hills and collapse after a regenerative cup of tea and a shower in the cabin of Natone Hills Fishery

Then, it’s spectacles, testicles, wallet and watch and we’re riding the 6 kms to the school for the reunion’s country dance/social/knees-up.

What a night. All manner of dress is scattered around the assembly hall with its brilliant shining gum floorboards; where once we climbed the monkey bars or listened to Mr Hunt’s solemn headmaster’s address. There are shorts and knee-length socks, one penguin suit, jeans and T-shirts, elegant evening gowns and long-limbed beauties from more recent Natone Primary School incarnations.

Speaking of penguins, the inevitable, divisive issues of Tasmania are everywhere in conversation. It’s not just recollection, it’s engagement … should Penguin heritage-list its waterfront or creatively develop. Opinions are, well, divided.

I talk to one old school friend whose life has been spent in the bush, evidenced by the bush cliche of gnarled hands and weatherbeaten face; decades spent planting trees, 1080 poisoning wildlife (“one time we picked up 400 wallabies off a 70 acre block”), He was “25 years with North and you thought they were bad; Gunns took over and I lost me job.” Now he works as a casual general farm worker.

There is an impenetrable sound wave of conversation rolling around the room.

They’re really good. But they’re competing with memory and there is an amazing hum as schoolmates re-acquaint and beer and lambrusco talk.

The only time there is a sort of silence is when Bushman Bill recites his ballad (to be added).

Then the really big moment comes … a couple of long tables appear on the polished floor. White paper rolls out over them and on goes a Valentine’s Peak of country tucker from sausage rolls to North-West creamcakes.

And we’re stuffed. Rarely does this writer leave any social function before falling over, being evicted or the sun forces reality.

But we’ve had a big bike ride, talked ourselves hoarse, have RSI from handshakes, bright-coloured cheeks from kisses and are so stuffed that before the Witching Hour we sneak out, before the start of the looser, after party.

Just a kilometre from the cabin we have a magical moment in the deep forest part of the road where we encounter a half-dozen cavorting possums in the middle of the road. We stop and watch. 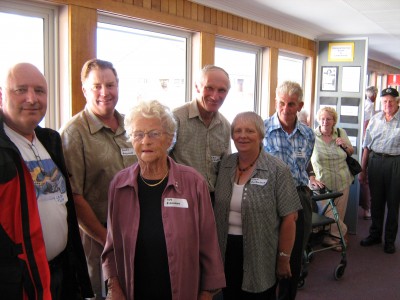 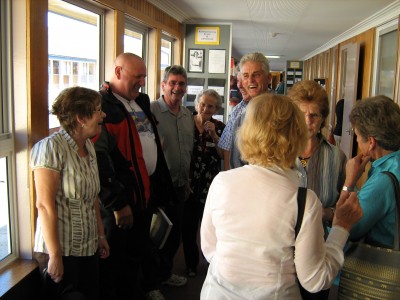 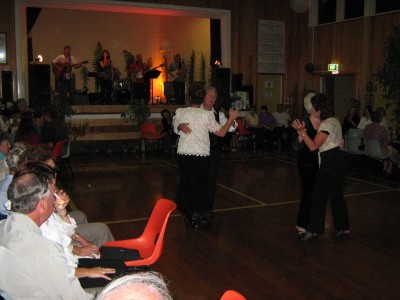 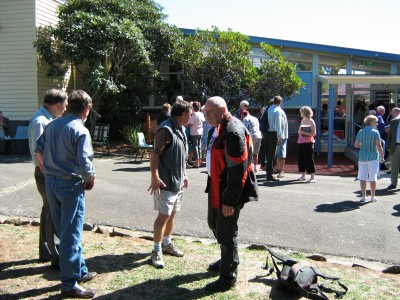 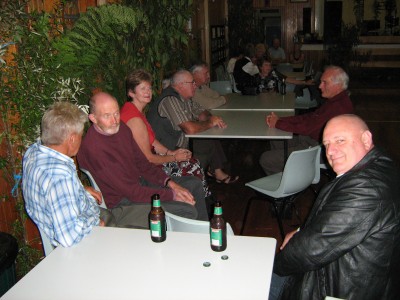 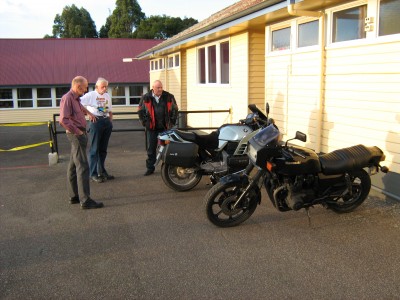