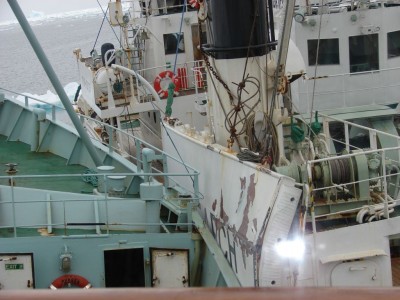 THE Sea Shepherd vessels Robert Hunter and Farley Mowat caught the Japanese whaling vessel Kaiko Maru bearing down on a pod of whales. The conservation vessels moved in and chased the whaler into the ice.

At one point during the confrontation, the Kaiko Maru turned to starboard and struck the Robert Hunter.

Further reports
*Paul Watson reports that the Kaiko Maru hit the Robert Hunter two times and has caused a one meter (three foot) hole in the hull. The situation is contained and Capt. Watson does not believe the Robert Hunter is at risk of sinking. The Japanese ship is reporting propeller ‘vibration’ but have not replied to offers of help from Sea Shepherd in response to the distress call from the Kaiko Maru.

*Sea Shepherd is running to their operational limit in the Southern Ocean to protect whales. However, very soon the ships will have to head for the nearest port, most likely the Port of Bluff, NZ. With careful management, they may make Melbourne or Wellington. Whatever their landfall the ships will be arrested and, quite possibly, the crew.