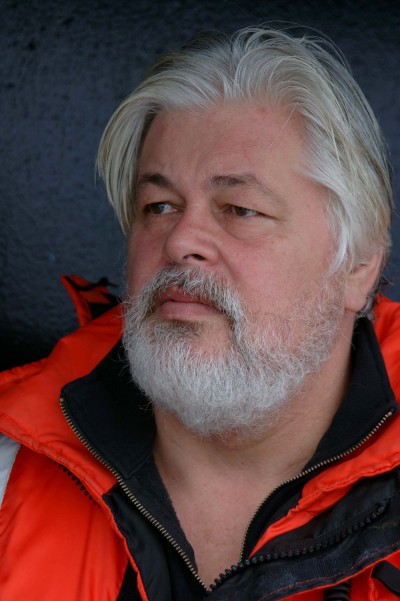 As his body emerged from the sea, I found myself looking into the depths of his eye. He was so close I could see my own reflection in that eye, an orb the size of my fist and that one gaze changed my life forever and forever robbed my heart of both joy and respect for my own species. Like a thunderbolt, the realization dawned on me that my species was insane.

‘Thirty-two years ago in June of 1975, I sat in a small inflatable boat and watched, angry and helpless, as a large Sperm whale rolled in terrible pain upon the surface of the sea. Blood spurted out in torrents from a gaping raw wound to the left side of his massive head.

The whale had taken an unattached harpoon at point blank range to the head as he turned to defend a mortally wounded female of his pod.

As his body emerged from the sea, I found myself looking into the depths of his eye. He was so close I could see my own reflection in that eye, an orb the size of my fist and that one gaze changed my life forever and forever robbed my heart of both joy and respect for my own species. Like a thunderbolt, the realization dawned on me that my species was insane.

Now, thirty-two years later, I continue to defend and protect the whales, the dolphins, the seals, sea turtles, fish and other citizen species in the seas. It has been a heart breaking mission, a never-ending war that has seen me lead countless expeditions to defend life with both victories and defeats. We have been shot at, been rammed, beaten, jailed, threatened and condemned. On the other hand we have sent whaling ships to the bottom, rammed them and destroyed their harpoons, we have released dolphins, sharks, turtles and fish from nets, destroyed longlines, harpoons, sealing clubs and rifles.

I have no apologies for any of these actions. After sinking half the Icelandic whaling fleet in 1986, a Greenpeace leader accused me of setting back the whale conservation movement ten years and said the action was reprehensible and unforgivable. I answered that I was not concerned for his or anyone else’s opinion. The whaling ships were sunk for the whales, not for people, and if he could find just one whale that disagreed with the action, I would promise not to do it again.

So here I am in January 2007, down off the coast of Antarctica searching for the Japanese whaling fleet on an impossible mission.

As large organizations like Greenpeace raise tens of millions of dollars, we have spent every penny we have and gone into debt to send two ships down to the Southern Oceans to hunt down the whalers. As politicians posture and pose, crying crocodile tears for the whales, they deny us coordinates, they refuse to uphold their own laws and they threaten us for doing the job they should be doing.

The Japanese whalers have satellite surveillance provided by their government. They have speed, sonar, explosive harpoons, political and economic clout and they have governments the world over they have bought and paid for to do nothing to interfere with their illegal activities.

We have a couple of old ships and all the passion that a hundred volunteers can bring to a cause. Our objective is an impossible one. How do we disable a formidable whaling fleet that outmans us, out maneuvers us, is technologically far superior to us, and is guided by the ruthlessness that only those who slay whales can possess?

The answer is that we can only try and we will do what we can do with the resources available to us and if we fail, we will fail gloriously in a valiant attempt.

We cannot do anything else? Given the resources, we would be able to stop them but such resources are not available to us. We can only throw ourselves upon the fire in the most courageous manner we know how and hope that we can make a difference, that we can stop the slaughter, end the cruelty, and uphold the law.

In a society where might makes right, where the dollar speaks the loudest and where humans barely comprehend the intricate relationship we have with the natural world and the responsibilities that lie with such comprehension, it is indeed an impossible task. But sometimes the impossible is the only possible solution and so we fight on, hoping for miracles and knowing in our hearts that there is no other option.

Thirty-two years ago, I watched a great whale die as I looked into his eyes and it changed my life forever. That is why I am down off the coast of Antarctica today hunting for the killers of those I consider my friends; the whales.’