Tasmanian weather
forecasts and warnings
Donate to Tasmanian Times –
BSB: 807009 Acc: 60178142
Want to have a say?
Send us a letter for publication
new writers & contributors welcome,
please contact us with your submission
Tasmanian roads –
latest alerts & reports
no new content for a few days,
site is being migrated 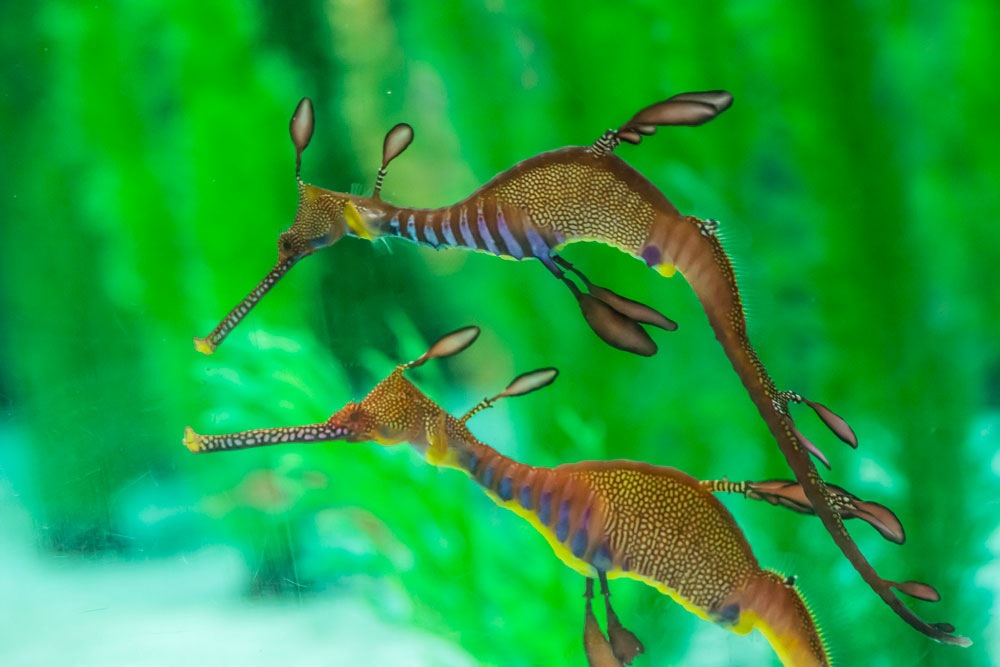 Disclosure: Peter George played a small part in Richard Flanagan’s research for Toxic in his role of co-Chair of the Tasmanian Alliance for Marine Protection. Before he settled in Tasmania, Peter, a former foreign correspondent, assumed salmon farming would help reduce the depletion of wild fish stocks without negative impact on marine environments.

Jack* is a small-scale commercial fisherman in Tasmania’s wild northwest where he plies the waters mainly in the lee of the Hunter Island group, partially protected from the ravages of the wild Southern Ocean.

Though the massive ‘Atlantic salmon’ feedlots that make up Australia’s largest fishery are hundreds of sea miles away, primarily in the southeast of the state, that does not mean Jack has been protected from the impact of the salmon industry. Until recently, seals that became a nuisance by returning again and again for a free feed around the southern feedlots were captured, loaded on to trucks, shipped up to the northwest and released. Now, where seals were once rare, they breed on coastal rocks and islands and gorge in fragile nurseries where fish and squid abound.

The trucking of seals and dumping in the northwest caused outrage amongst fishers and animal activists alike so Big Salmon changed its ways. Now they fire pellet-filled ‘beanbags’ from shotguns at the seals or detonate explosive charges underwater to deter the ‘pests’ – in fact, a protected species. The impact of these detonations on the senses of seals and other marine life is unknown.

Petuna is now on the verge of gaining approval to install its own massive floating feedlots in the lee of the Hunter Island Group – Jack’s fishing grounds. The little historic town of Stanley, the gem of the northwest, is set to become the industrial hub of the industry with 24-hour truck movements, processing plants, promoted to locals as a job-creating godsend. (More on that later).

Of Richard Flanagan’s literary journalism in Toxic: The Rotting Underbelly of the Tasmanian Salmon Industry, Jack says: “Can we make him the patron saint of [the movement to halt the industry’s expansion]?

The acclaimed author and his publisher, Penguin Random House, dropped Toxic like a bomb on unsuspecting Tasmanians and salmon industry and into the midst of an election campaign in which Liberal and Labor candidates studiously avoided the issue.

Almost no major party candidate would discuss plans to transform the $800-million-a-year business into a $2 billion behemoth in less than a decade with the unknown impact that will have on coastal marine life and communities.

This brings us to the opening words of Toxic that surely only Richard Flanagan would craft: “At the beginning its sea was rich and wondrous. We’d snorkel and fish and swim and beachcomb. Marvelling.”

By the end of page five, the salmon feedlots have arrived and things are becoming ominous: “We didn’t like the salmon farm, but we felt compelled to accept it in a live and let live spirit. While we let Tassal live, things began to die.”

(Tassal is the largest of the three Atlantic salmon companies).

Flanagan tells a dark story anchored to his beloved shack on the beachfront on Bruny Island, a Tasmanian treasure. Here his elegant much-awarded novels were crafted in deep tranquillity for a quarter century before the noise of Tassal’s feedlots, generators, air pumps and vessels, huge and small, drove him away. The irony of Toxic is that Bruny Island lies at the centre of his tale but he was unable to write it there.

By page eight, the despair is palpable as he watches the lifeblood of the D’Entrecasteaux Channel seep away species by species; penguins, dolphins, maireener shells from which Truganini and her people had made necklaces: “We didn’t speak when the seahorses disappeared. When the weedy seadragons disappeared. When the striped cowfish were no more. When the seagrass started vanishing. We did talk two years ago about how the flathead were gone, but then we stopped, because it was too sad and everyone knew why they were gone.

And I felt so ashamed.”

The shame is the shame anyone might experience having watched a crime committed and done nothing – in this case the pillaging of public waterways by a business that describes itself as ‘fish farming’ but in reality is more closely aligned to egg production by battery hens.

From here-on in, the rotting underbelly of the industry, of its political and bureaucratic collaborators is explored with a plot that is as absorbing as any fiction. There is a story arc that takes the reader through the heart of an industry that tramples on the citizens and scientists who stand in its way; uncovers the compliant politicians and bureaucrats who have allowed the salmon companies to set the rules; dives into the international depredations of salmon feed companies that source their fish meal from nations that can ill-afford to lose their fish stocks and from soy growers who, like as not, have cleared away Amazonian jungle.

Toxic has 195 pages and 270 footnotes. It’s serious journalism, albeit campaigning journalism, that cannot be easily dismantled and cannot be dismissed. For any reader, for any consumer, for the parent who does the family shopping, for anyone who cares about what they consume, Toxic is not just an education but a surprisingly ‘good read’ – no serious reviewer may any longer use the phrase ‘page turner’.

The silence of the salmon companies when the book was launched may well have been the product of shock. Toxic was published in great secrecy, without pre-publicity.

The Salmonid Growers’ Association – in reality a lobbying outfit for the three companies, Tassal, Huon Aquaculture and Petuna – fired off its best shot: Richard Flanagan is primarily celebrated for his works of fiction.

Flanagan has produced noted works of journalism over the years but the truths he tells of the salmon industry are indeed stranger than fiction.

While Toxic takes apart the Atlantic salmon industry scale-by-scale, it also offers hope – an escape clause that offers the industry salvation from inevitable collapse as waters warm, citizens rebel. It even offers hope for the jobs – no more than about 1,500 in all – that will disappear when the industry does.

The lifeline is offered only after the corrupted processes that have allowed the industry to flourish have been explored in excoriating detail; Hobart’s drinking water catchment polluted by nutrient outflow from flow-through salmon hatcheries; failure to penalise companies when overstocking led to more than a million fish deaths and major damage to World Heritage-listed Macquarie Harbour; a salmon review panel that simply dismissed the advice of its two most noted environmental consultants.

Only then does Flanagan point to the Arabian desert where land-based salmon installations (recycled aquaculture systems – RAS) are proliferating; to the original home of fish farming, Norway, where just one RAS will produce more salmon than Tasmania’s three companies combined. Australia remains the only continent without RAS but Flanagan points out it’s inevitably coming and Tasmania’s ‘Big Salmon’ should be planning, along with the government, for the transition. Unless Tasmania gets ahead of the curve, he argues, RAS will set up closer to mainland markets and the island state will be left holding the ruins of a 20th century technology along with its depleted marine life and the remains of Brand Tasmania built in part upon a lie.

“We are devouring a beautiful world sacred to many Tasmanians that has been reduced to a quarry for the greed of a few. Healthy? Clean and green? Wild?”