All colours of the rainbow: why Tasmania’s new gender identity laws are warranted

In late 2019, Tasmania became the first state to allow its citizens (especially transgender/agender people) to obtain a birth certificate that accurately reflects their gender identity. Given the novelty of the law, the state’s peak law reform body was directed to consider the impact of the reforms on Tasmania’s system of law and justice. Today, the Tasmania Law Reform Institute reported its findings that the changes in the law have no significant unintended consequences for the law and justice system.

This will provide greater clarity and certainty to other Australian jurisdictions that follow Tasmania’s lead. Victoria’s own birth certificate reforms came into effect last month.

Why did Tasmania change its laws?

Most people don’t spend much time thinking about their birth certificate. But for some people the certificate is a constant reminder that the state does not identify them in the same way they identify themselves.

To understand why this is so, it is important to recognise that sex, sex characteristics and gender are not the same thing:

As a society, we are coming to accept that sex and gender are not binary, but a diverse spectrum between male and female. That includes:

Some people who are required to produce a birth certificate as proof of identity – for instance, when enrolling in school or applying for a job – historically found the process confronting and distressing. They may be physically different, feel different and live differently from the sex recorded on the certificate.

Tasmania’s new laws protect the rights of gender-diverse members of the community. They do this by:

Perceived legal issues with the reforms

The Law Reform Institute was directed to inquire into and report on a range of ostensibly legal concerns about the law that stakeholders and members of the community had raised. Here are some examples.

The institute’s research showed gender is no longer an identifying criterion across a range of Australian identity documents. For instance, driver licences and passports no longer specify gender or allow a person to self-identify their gender.

Tasmanian law reflects that trend and allows people to accurately reflect their gender across all their legal documents.

People will be able to hide their criminal records by changing their gender.

While previous genders are no longer recorded on Tasmanian birth certificates, a separate historical record is now maintained for the purposes of policing. This means authorities will always have reasonable and lawful access to essential information about a person who has changed their gender.

Predators will misuse the law.

Concerns were raised that people would illegitimately change their gender to access female toilets or shelters, or gain unfair advantages in sporting programs.

However, the Tasmanian laws are carefully designed to safeguard against such misuse. The registrar responsible for birth certificates can refuse to permit a change of gender if not satisfied the application is legitimate. Many sporting clubs, woman’s services and government programs have adopted policies addressing inclusion and safety.

Children under 18 should not be able to change their gender.

The institute concluded that prohibiting anyone under the age of 18 from changing their gender is inconsistent with how the law deals with the legal, bodily and medical autonomy of young people, where decision-making capacity has regard to a person’s maturity rather than a threshold minimum age.

It also accepted that transgender adolescents are at a much higher risk of depression than other young people. The new laws can help improve health outcomes for those young people with capacity to seek legal recognition of their gender identity.

Consent to surgery on minors

While Tasmania’s law reforms were only concerned with changing gender on birth certificates, the institute’s inquiry also considered concerns and confusion about the role of parents in authorising surgery to alter their children’s sex characteristics.

In recognition of the complexity of the issue, and lack of consistency in the application of common law and human rights principles, the institute recommended specific legislation be introduced to regulate consent to medical intervention on children. 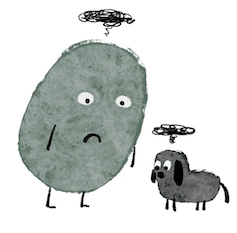 Trans and gender-diverse young people may experience stressful occurrences that can increase their risk of depression, anxiety, self-harm and suicide. Illustration by Jon Kudelka.

Ultimately, most of the arguments about the legal implications of birth certificate reform were better characterised as social, ethical or political in nature.

Indeed, the institute’s inquiry uncovered no evidence that allowing people to change their officially recorded gender would have any unforeseen legal consequences.

At most, there are small issues to be considered, but these have been taken into account and the legislation carefully responds to them. Most notably, this was done by ensuring effective scrutiny of gender-change applications to ensure they are genuine and warranted.

While the more controversial topic of when children can provide informed consent to surgery that alters their sex characteristics may require some legislative change, this is, as noted, a separate issue from gender identity. The institute’s inquiry therefore dealt with it separately, giving rise to different law reform recommendations.

Perhaps most important is the fact most Tasmanians, and most residents of other states considering similar legislation, will be entirely unaffected by the law reforms.

However, the institute heard and accepted evidence that, for a small proportion of our society, these reforms will have a profound impact on the rights, health, well-being and sense of self of gender-diverse people.

In the balance the law reform is clearly warranted.

All illustrations and videos in this piece are by Jon Kudelka.