When it comes to health, Tasmanians deserve support, not punishment. support don’t punish

There is a better way for Tasmania when dealing with drugs in our community. We cannot continue on as we are and keep trying to arrest our way out of this problem. Health-based responses that support people who use illicit drugs, while maintaining a law enforcement approach to drug trafficking and supply, will save lives, reduce drug related hospital admissions, reduce crimes involving serious violence, and save taxpayers considerable money. 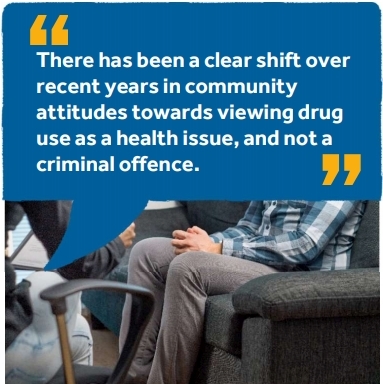 On Friday 26 June 2020, the Alcohol, Tobacco and other Drugs Council Tasmania will join the global advocacy campaign Support. Don’t Punish calling for better drug policies that prioritise public health and human rights. The campaign aims to promote drug policy reform, and to change laws and policies which impede access to health interventions.

Approaches such as decriminalisation have been shown to deliver significant improvements to the health of people who use drugs, as well as their families, friends and carers. As well as save money in reducing costs for the justice system.

ATDC chief executive Alison Lai says that the Support. Don’t Punish campaign highlights the problems of punishment-centred drug policies and calls for them to be replaced with sensible policies and programs that have been proven to work to turn around the lives of people who use drugs.

“The human and financial costs resulting from our current drug laws impact the Tasmanian community as a whole, including not only those who use drugs, but also their families, friends and carers,” she said. “These costs can be significantly reduced through the often misunderstood approach of decriminalisation.”

Lai stressed that decriminalisation is not the same as legalisation. Decriminalisation is an approach where criminal penalties for the use and/or personal possession of small quantities of illicit drugs are removed. This is very different to legalisation, where it is no longer a crime to supply, sell, purchase, possess or use drugs.

“The ATDC does not propose that the Tasmanian Government legalise illicit drugs.

However, personal drug use is first and foremost a health issue which warrants a health-focused response to address the underlying causes of an individual’s illicit drug use,” she said.

Despite significant investment in law enforcement, 43 per cent of Australians over 14 years of age have used illicit drugs, with 16 per cent having used an illicit drug in the last 12 months. There were 2,196 drug arrests in 2017-18 and more than 80% of these were related to possession or personal use, not supply or trafficking offences.

“We ask the Tasmanian community if the current approach is working, and to join us in a conversation about sensible alternatives for people found in possession of illicit drugs,”  Lai said.

More information about the ATDC’s call for decriminalisation in Tasmania – atdc.org.au/decriminalisation. The full position paper can be downloaded at that link. support don’t punish