The Tasmanian Symphony Orchestra has responded swiftly to the necessary cancellation of upcoming live performances for the immediate future by creating a new digital project: #TSODailyDose, which premiered today.

You can view the first episode at the bottom of this page. 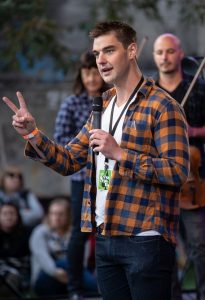 Utilising the orchestra’s existing YouTube channel,  the TSO will focus on the creation of content – released daily at 8am –  offering digital engagement with the full range of the TSO’s activities.

Whilst not possible to perform as a full orchestra in a conventional format, the TSO is adapting to new ways of creating music with smaller and micro formats. TSO Daily Dose will include footage from recent concerts, tracks from the TSO’s extensive recorded archive with newly created imagery, interviews, show-and-tell demonstrations and chamber music performances.

TSO CEO Caroline Sharpen said, “Like the beautiful singing on the Italian balconies this week, music connects and uplifts communities in times of crisis. When the world is upside down our role, as Tasmania’s orchestra, is to step up and be there for our community. We’ve created a way to be of service which is through a daily dose of positivity, optimism, beauty and fun.”

“The TSO Daily Dose is an easily and freely accessible way to share a glimpse into the wealth and depth of musical knowledge that lives in the TSO. An accumulation of talent and experience that  goes so far beyond what we can show on stage in any one concert, and a welcome dose of positivity during these challenging times.”

#TSODailyDose premiered on Friday 20 March, with an excerpt from the previous Saturday’s cancelled concert A German Requiem filmed in the TSO’s home, Federation Concert Hall. Internationally acclaimed soprano Siobhan Stagg performed Ihr habt nun Traurigkeit from Brahms’ Ein deutsches Requiem with the TSO and TSO Chorus under the baton of Chief Conductor and Artistic Director Eivind Aadland. More clips from this performance will be released in future weeks.

The TSO has suspended all public performances immediately until further notice and will review its response to the COVID-19 pandemic in early April.