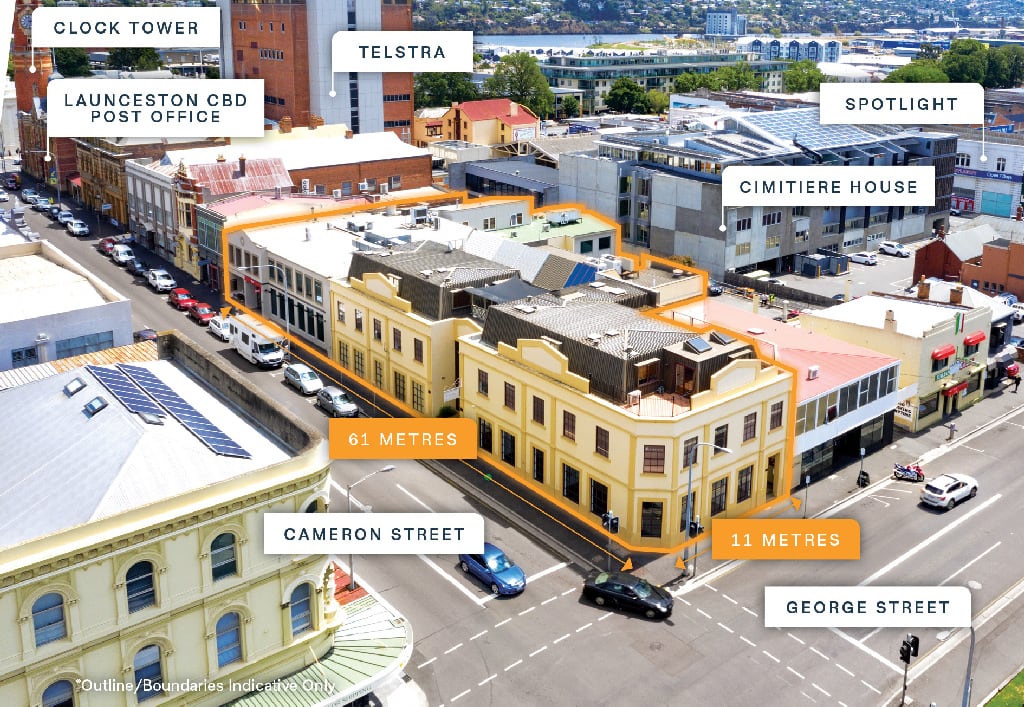 Launceston’s iconic Camerons Building has been put on the market amid increasing investor activity within Tasmania’s commercial property market.

The renowned CBD office and retail complex, home to Camerons Accountants for decades and now counting the Federal and State Governments among its tenants, will be auctioned this month.

Occupying a 2502sqm site with 2834sqm of floor area across three levels, the corner property at the intersection of Cameron and George Streets comes fully leased and with multiple income streams.

Its tenancy profile is among the best in the state, including long-time tenant Camerons Accountants, the Commonwealth of Australia, the Tasmanian Government (Department of Health and Human Services) and Knight Frank all calling the building home.

The property has a four-star NABERS rating.

Property agent Raoul Holderhead said the Camerons Building was one of the city’s most prominent properties, with potential investors also set to benefit from an immediate upgrade to Camerons’ offices.

“It’s a super corner in the established financial and legal precinct of the Launceston CBD,” Mr Holderhead said. “Camerons are about to upgrade their office, so that will very likely keep them there for another 20 years!”

The property currently returns approximately $647,095 per annum and its potential sale comes as the local and state economy and property market both move from strength to strength. The property is expected to sell for circa $6.75 million.

Investors continue to see commercial assets in Tasmania, with a string of properties sold at recent auctions across the state in 2019, including four car dealerships, and a Centrelink call centre at Kings Meadows which traded for $4.5 million in August.

The Camerons Building will be auctioned in Crown Casino’s River Room from 11am on Wednesday 26 February.

Occupying a 2300sqm site at 139-143 Hobart Road, with a strong and complementary tenancy mix, the property currently returns more than $352,000 plus GST in annual rent.

Immediately next door to a medical centre, it is home to a number of key and longstanding health-related tenants, including the Banjo Group’s LivEat café, National Hearing, Engage Therapy, Eyelines Optometrist and world fitness group F45.

Kings Meadows is the Launceston’s biggest commercial precinct outside of the CBD. The property agent Shaun Venables said the future owner would benefit from rental growth and recoverable outgoings, all of which are built into the majority of the property’s leases.

The listing of 139-143 Hobart Road comes as commercial property buyers double down on the region as a key target for investment.

In August a Centrelink call centre, also in Kings Meadows, was sold to an interstate buyer for $4.5 million, while yields have plummeted for key properties such as a Bunnings Warehouse at Glenorchy and four car dealerships across the state, which were sold in April last year.

The auction will be held at the same session as that of the Camerons Building on Wednesday 26 February.